Two fashion shows, scheduled in August at the Jacob Javits Center, will be the third edition of Intima America here in New York. 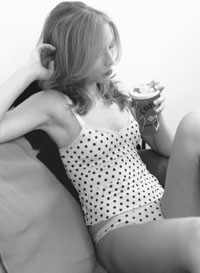 NEW YORK — Officials at the Intima America trade fair are bracing for a turnout of more than 2,000 retailers from major department and specialty stores as well as catalogues and e-commerce businesses, said Elly-Ahn McCloud, show manager.

Scheduled for Aug. 1-3 at the Jacob Javits Center here, a highlight of the fair will be two fashion shows staged in Hall 1E on Sunday, Aug. 1 at 11 a.m. and Monday, Aug. 2 at 3 p.m. This will be the third edition of Intima America in New York; the show is staged twice a year, in March and August. The 13-year-old Intimate Apparel Salon, which was acquired by Messe Frankfurt in 2002, is held in November.

“We reach out to buyers through a comprehensive marketing campaign featuring brochures, postcards and ads, and also keep them updated through e-mails, faxes and personal calls. Manufacturers also source the show to do business with the suppliers featured in Intima America,” McCloud said.

She added that the location of the lingerie fair will be particularly advantageous for retailers this year, because four other trade shows will be staged at the same time at the Javits Center: Accessories The Show, Moda Manhattan, Fame and Children’s Club.

“We are colocating with these other trade shows, and it’s great for us,” said McCloud. “We’re really looking forward to great crossover traffic.”

In addition to a new fashion show producer from Atlanta, The Murphy Group, as well as a Swimwear Pavilion, the fair’s other highlights will include:

There also will be a round of seminars. Beginning on Aug. 2 at 10 a.m., Ray Nakouzi, senior trend consultant for Promostyl, will speak about lingerie and swimwear trends; at noon, Donna Wolff, vice president and divisional merchandise manager of intimate apparel and hosiery at Bloomingdale’s, will address A New State of Business: Servicing the Customer; at 1:30 p.m, Silvia Harven, vice president of Sara Lee Branded Apparel, will discuss The Passion and Style of the Ethnic Consumer, and at 4 p.m., Kim Rawlings, editor of Contours magazine, will describe how to use trade shows, the trade media and p.r. as a tool for buyers.

On Aug. 3 there will be three seminars: The Art of Shapewear will be presented at 10 a.m. by Steve Chernoff, director of Rago Shapewear; at 11:30 a.m., Eric Hertz, director of executive studies at the Fashion Institute of Technology, will give an overview of The Value of Executive Education, and at 1 p.m., Mercedes R. Gonzalez, director of The Global Purchasing Group Inc., will speak about Creating the Ultimate Sales Team.

Intima America has also commissioned Barry Ross Intimate Connections, a global resource company, as a consultant for manufacturers and retailers.

“Right now, preregistration is over 2,000, and the overall mood is very good and is very positive,” said McCloud, noting that the show will focus on women’s lingerie, sleepwear and loungewear; men’s underwear, and women’s swimwear, hosiery, slippers and maternitywear.

Tagliola House will introduce an Italian line called Mamanonmama, and French maker Le Bourget will present its branded hosiery, as well as a collection of lingerie designed by Vannina Vesperini. Selga, a Turkish maker of men’s underwear, will make its first appearance in the U.S.

Shuttle service is available to the Javits Center Aug. 1 to Aug. 3 throughout the day from the following locations: West 45th Street, off Broadway; 125 West 18th Street, and 40 East 34th Street.