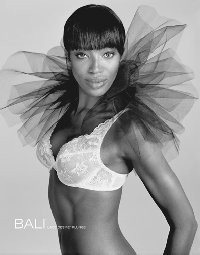 NAOMI DOES BALI: The Bali Co., a unit of Sara Lee Intimate Apparel, will be launching a multimillion dollar ad campaign this summer for Bali foundations, featuring supermodel Naomi Campbell.

The dramatic black-and-white photography by Richard Avedon will appear in a number of magazines, including Vogue, W, Elle and Glamour. Shahid Agency handles advertising for the Bali brand.

Jennifer Armstrong, vice president of marketing for Bali, said, “This is an incredible collaboration among one of the most glamorous women in the world and one of the most innovative and respected fashion photographers. Naomi represents everything that Bali is about — fresh, sophisticated, glamorous — and no one has that unique vision to capture that like Richard Avedon.”

The new Bali ads will expand on the imagery launched by Avedon for the brand in fall 2001, which featured a message of modern elegance. The images of Campbell will introduce three new products highlighting beauty, comfort and fit.

Armstrong said each image will convey the personality of the product, from playful and sassy to sophisticated. For the new shapewear line called Bali Fusion, Avedon combines three shots of a Fusion-dressed Campbell in motion. A soigné image shows off the Bali Lace Desire plunge bra, and the Bali Live It Up bra portrays Campbell flirting with the camera.

Carole Hochman, who held the title of president, will continue as the sleepwear firm’s director of design and its chairman. Morris joins the company’s executive committee, which consists of Neal Hochman, chief executive officer; Peter Gabbe, executive vice president and chief operating officer, and Hochman.

Morris, formerly executive vice president of sales for new business ventures, will absorb his responsibilities into his new post and focus on the growing private label sector of the firm, as well as the licensed Esprit and Jockey divisions, and nontraditional product lines.

Hochman said, “During the six years [Morris] has been with the company, he has proven to be a salesman extraordinaire, a mentor to our younger executives, a great partner to our retailers, a creative problem solver and an extremely popular executive.”

Before joining the Hochman company in 1997, Morris served as a member of the office of the president of I. Appel Corp., and was president of his family’s sleepwear and daywear firm, Val Mode, until it was sold to I. Appel in 1996.

PERFECT TOGETHER: It’s not exactly the latest style invention, but a new item of Polar fleece called The Cupplerobe has been designed for two people to share. Its got two hoods and two front openings that allow each person full use of their arms and hands.

Los Angeles-based media executive-turned-robe designer, Alan Cole-Ford, said a consumer interest in “crisis cocooning” during an uncertain economy and a wartime climate was his inspiration for the item.

“It was designed for both fun and comfort, but fundamentally, it’s about togetherness,” said Cole-Ford, noting that more than 300 have been sold since its introduction in late February.

The Cupplerobe is sold on Cupplerobe.com for $79.95. Solid colors are blue, burgundy, olive and black. There also are two prints: leopard and zebra. One size fits all.

“We tried to make it spacious enough, but we recommend that somebody fairly corpulent might fare better with a mate who has a normal-sized weight. People like to wear it with not a whole lot underneath. That’s the fun of it,” he said.

TEFRON IN RED: Tefron Ltd., the Bnei-Brak, Israel-based maker of seamless intimate apparel, said its net losses in the fourth quarter widened to $3.5 million, or 28 cents a share, from $1.4 million, or 11 cents, a year ago. However, excluding the effects of one-time expenses to shift its Alba-Waldensian U.S. manufacturing operations to Israel, Tefron’s bottom line jumped into the black in the period with earnings of $2.3 million, or 18 cents a share. Sales for the quarter ended Dec. 31 inched up 2.4 percent to $50.4 million.