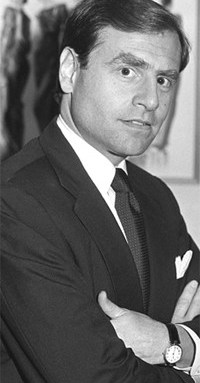 NEW YORK — Donna Karan International is for sale, after all.

LVMH Moët Hennessy Louis Vuitton is preparing to sell the fashion house, possibly by the end of the year, according to numerous sources familiar with the two companies. In the meantime, sources said, Jeffry M. Aronsson is the lead candidate to take the chief executive reins at Karan, replacing Fred Wilson.

But that’s not the end of the intrigue about LVMH. While insiders say the French luxury conglomerate has been quietly shopping Karan around for at least 18 months, speculation is mounting about another of its subsidiaries: Marc Jacobs. The company has firmly denied any interest in selling Jacobs, however, observers note an increasing interest by deep-pocketed investors Lawrence Stroll and Silas Chou, owners of Michael Kors and Asprey & Garrard. In addition, there could be friction between Jacobs, his business partner Robert Duffy and LVMH over the strategy for the Jacobs business.

Talk of a possible sale of DKI — and key executive moves —has practically consumed the industry since the bombshell announcement from Saks Fifth Avenue last week that Christina Johnson, its chief executive officer, had stepped down and a replacement would be announced by the end of the year. Speculation has centered on Wilson, who has not only achieved a marked improvement in Karan’s performance, but also has told several executives on Seventh Avenue that he wouldn’t leave the company until he had an appropriate suitor for the brand in place.

In another development, now that Wilson has been identified, but not “officially” confirmed, as Johnson’s likely successor — Karan herself spilled the beans at the Fashion Group International benefit on Thursday — talk about his likely successor at DKI has centered on Aronsson, ceo of Marc Jacobs International and a big Wilson supporter. Moving Aronsson from Jacobs to Karan was described by top LVMH officials on Friday as “an option that is being considered,” but such a move could be tricky, depending on whether either label is sold.

Retail executives described a number of scenarios that have been discussed for the future of the Karan and Jacobs brands over the past week, many of which have been fueled by rampant speculation among companies that are interested in acquiring the brands, as well as potential applicants for positions that could open up, as Johnson’s departure at Saks will likely create a domino effect of job openings.

None of the sale rumors that have cropped up or the identities of potential bidders (Liz Claiborne Inc. for Karan and Lawrence Stroll and Silas Chou for Jacobs) are exactly new. Remember Stroll and Chou grinning in the Jacobs front row in September? And the Karan rumors came up just weeks after LVMH completed its pricy acquisition two years ago, apparently with not enough due diligence to recognize the poor financial shape of its books. Yet the heads of at least two major U.S. retailers feel there is good cause to believe LVMH could be convinced to make a deal for Marc Jacobs with Stroll and Chou, despite the French company’s insistence that Jacobs is not for sale.

However, its denials have since softened into “No comments.”

The most surprising rumor that surfaced last week was that LVMH might have already made a deal to sell Donna Karan and didn’t have to report because it wouldn’t have enough material impact to be of note to its shareholders. According to luxury analysts, French companies face no firm deadline to disclose transactions — even ones that can affect a stock price.

Even if LVMH were to already have sold Karan, it would be under no obligation to immediately inform the marketplace, such as what happened when it acquired an additional stake in Fendi in the first quarter of 2002 for $218.5 million, yet the filing was discovered by investment firm HSBC in a report published in mid-May.

Asked if LVMH might be looking to sell Karan, one source said, “It’s a possibility, but it’s not that sure. It’s an option. Lots of American companies would be interested.”

Wilson’s expected departure at Donna Karan also has opened a number of wounds for both the designer company and the conglomerate. Karan had several memorable clashes with Wilson’s predecessor, Pino Brusone, the former Giorgio Armani chief who lasted a year before Wilson, previously president and ceo of the LVMH Fashion Group, America’s, was brought in to resolve the discord. Not only did Wilson stem the company’s losses — it’s said to be on track to turn a profit this year — he also forged a relationship with Donna Karan herself and created a healthy working environment at the troubled company for the first time in years. Now, insiders are worried about what’s going to happen without him.

The rumors about Aronsson appeared to hold water last week, as insiders at LVMH said such a move is an option under consideration. A former attorney who headed Oscar de la Renta Ltd. for a decade, Aronsson moved to Marc Jacobs in January following the guidance of Wilson, a close friend. However, he appears to have met a similar fate as the previous ceo, Scott Bowman, who found himself working in a company that had no real need for a ceo, since its business operations have long been dominated by Jacobs’ career-long business partner, Duffy, who is president. There were numerous reports of difficulties between Aronsson and the Jacobs staff, much as there have been disagreements between LVMH and Jacobs. Now that Wilson is likely leaving Karan, it would make sense that Aronsson would be in line for the top spot at Karan.

Also, if a sale of Jacobs were indeed to take place, then it would make sense to move Aronsson to another LVMH brand. But what if Karan has been sold, or is about to be? The common thinking is that the move would be an opportunity for Aronsson to make a contractual deal with LVMH, while watching the company’s operations for any short-term transition. Neither Aronsson nor Duffy could be reached for comment on Friday.

LVMH officials refused to comment on the proceedings on Friday, nor would they dispel any of the talks that a sale, at least of Donna Karan, was in the works. Insiders at Karan, bankers and stores firmly believe that LVMH paid too much money for the business — a $643 million deal — quickly brokered in December 2000 by Yves Carcelle, now ceo of Louis Vuitton — and that the conglomerate is trying to find some way to recoup that loss without facing too much embarrassment.

“LVMH has been floating the idea of a Donna Karan sale for the past 18 months,” one source said. “They’ve been doing it in a very soft way, and many people at LVMH, except for Yves Carcelle, who did the deal, seem to be involved in the process. The problem is the price. Donna Karan is a very salable company, but the price is too high, and that’s why conversations with potential investors have been going nowhere. There is no way anyone is going to shell out what LVMH paid for it.”

So, several alternative scenarios have come up. Liz Claiborne Inc. would be the natural company to buy Donna Karan, considering its position in the American market and the amount of business the company does through its licensed DKNY collections. Plus, Claiborne has been on a buying spree: Its ceo, Paul Charron, said this week that 2004 will not pass without an acquisition, and Charron has often said he doesn’t care for licensing. Claiborne officials didn’t comment.

Or there’s been talk that DKNY and Donna Karan could be broken up and sold as parts, but that could spell the end for Karan’s high-end collection, which, like most high-end designer lines, has never been a profit center for the company.

“You can’t have a name like Donna Karan in so many different hands,” one source said. “It would totally devalue the higher-end part of the business.”

Otherwise, there’s not a lot of likely domestic parties with enough cash to buy the company. Phillips-Van Heusen is still digesting Calvin Klein Inc., Jones Apparel Group would surely have issues owning a designer brand that is licensed to Liz Claiborne and Stroll and Chou — according to someone who has asked them — reportedly responded, “No way.”

Still, on the scale of rumors, Donna Karan by all appearances has been upgraded from a “said to be for sale” to a “really for sale,” while the scenario at Marc Jacobs remains hopelessly more undecided. In that case, there’s an identifiable buyer: Stroll and Chou’s Sportswear Holdings Ltd., which bought Michael Kors Inc. in January and has been actively pursuing designer businesses for the past few years.

As with many of the designer businesses that have merged into the European conglomerates in the past decade, Jacobs is often reported to have expressed frustrations with LVMH’s focus more on selling high-ticket Louis Vuitton handbags than developing his signature brand. The seven-year renewal contract he signed to continue as the creative director of LVMH’s house brand, Louis Vuitton, in 2001 was said to be tied to certain agreements that LVMH would step up its investment in Marc Jacobs, including the financing of the launch of the successful Marc by Marc Jacobs secondary line.

So, could LVMH be persuaded to sell Marc Jacobs now, even though Jacobs’ involvement in Louis Vuitton is viewed as a critical component to its continued success?

Sources said Duffy and Jacobs could be striking on LVMH’s eagerness to trim its brand portfolio to broker their independence and are encouraging the conglomerate to consider a deal with Stroll, while Jacobs would stay on in his role at Louis Vuitton. That scenario, however, has been hindered by what sources on LVMH’s side have described as a reluctance to deal with Stroll, even though they have already negotiated the conglomerate’s share of Michael Kors this year. Some people have said LVMH executives are intimidated by Stroll, who casts an impressive figure and apparently harbors ambitions of building his own luxury conglomerate, which could someday rival the position of LVMH.

But wait, there’s more. It’s not just a case of Jacobs-Karan-Wilson-Aronsson intrigue, but add in what’s been going on at Gucci Group and executive departures at Anne Klein, and the possibilities have become mind-boggling. John Idol, the ceo of Kasper A.S.L. and Anne Klein, has been rumored to be headed to Michael Kors as its ceo for about six months. He’s spotted daily in Kors’ building at 550 Seventh Avenue, yet is still not confirmed in the position. (“No comment” from Kors Inc. on Friday.)