The bidding for Levi Strauss & Co.’s Dockers label may be heating up as several investment firms start to show interest in the casual clothing brand. 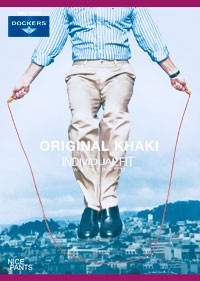 NEW YORK — The bidding for Levi Strauss & Co.’s Dockers label may be heating up as several private investment firms begin to show interest in the casual clothing brand.

Levi’s reached an agreement this month with its primary lenders to approve a sale of the $1 billion unit with the requirement that the proceeds reduce the San Francisco-based parent company’s net debt by at least 30 percent. The guideline would suggest a minimum selling price of more than $650 million, based on the firm’s $2.22 billion long-term debt load as of May 20.

Perry Ellis International Inc., working with Oak Hill Capital Partners, and Haggar Corp., which was said to be seeking an investor to back the company, pushed the bidding for Dockers into the $750 million to $900 million range, the Wall Street Journal reported on Friday.

“We do, from time to time, review potential acquisitions and other strategic opportunities,’’ Perry Ellis said in a statement. “Any acquisition would only be undertaken if we believed it to be in the best interests of our shareholders.”

The statement did not name Dockers, or any other company. Rosemary Trudeau, vice president of finance, said the Miami-based firm would not comment further.

Officials at Oak Hill could not be reached. Haggar executives did not return phone calls.

“The process is moving ahead,’’ a Levi’s spokesman said. “We’re going to continue the exploration and would expect to have an announcement in the weeks ahead.”

The possible entry of Oak Hill and others into the bidding “leads me to believe that the industry players probably aren’t willing to pay the price Levi’s is looking for,” a bond analyst said.

Levi’s executives have said they have a minimum price in mind and would not sell the Dockers brand for less. They have not disclosed the target number.

An investment firm such as Oak Hill — founded by billionaire Robert Bass and believed to manage about $10 billion in capital — would work with an apparel company because it would need the management experience and infrastructure, the financial sources said. Many of the Dockers brand’s back-office functions, such as sourcing and distribution, are handled by Levi’s.

In its last fiscal year ended Jan. 31, Perry Ellis reported net income of $13.2 million on revenue of $484.2 million, though it has been growing aggressively — first-half profits were up 85.8 percent on a 61.1 percent surge in revenue. As of July 31, its balance sheet showed $233.3 million in long-term debt, according to a filing with the Securities and Exchange Commission.

Haggar recorded $9.6 million in profits on $482.4 million in sales in its fiscal year ended Sept. 30. Through the nine months ended June 30, its net income more than doubled on essentially flat sales. As of June 30, Haggar’s balance sheet showed $2 million in long-term debt.