Despite challenges, a new wave of Belgian brands has been gaining momentum while established names adapt to a younger crowd.

Antwerp, Belgium, has been rich for a long time. Pepper, silver and the silk trade made the city an economic powerhouse in the 16th century and it has been a nurturing place for art, culture and fashion ever since. Nowadays, it sits on the world’s largest diamond trade business and hosts Europe’s second-largest port.

The city’s Royal Academy of Fine Arts has been nurturing design talents such as the Antwerp Six, Martin Margiela, Haider Ackermann, Kris Van Assche, Glenn Martens, Demna Gvasalia and Jan-Jan Van Essche since the Eighties. They went on to run respectable and successful fashion businesses in the city or became creative directors at luxury houses, such as Hermès, Berluti, Dior and Balenciaga.

Now a new generation of Belgian fashion brands has decided to set up their businesses in the city, with new approaches and different design ethos.

“I wish I would have done it here, it would have been much easier,” said Martens, creative director of Y/Project, before he participated in a panel discussion during a series of talks organized last month by Flanders District of Creativity in Antwerp. 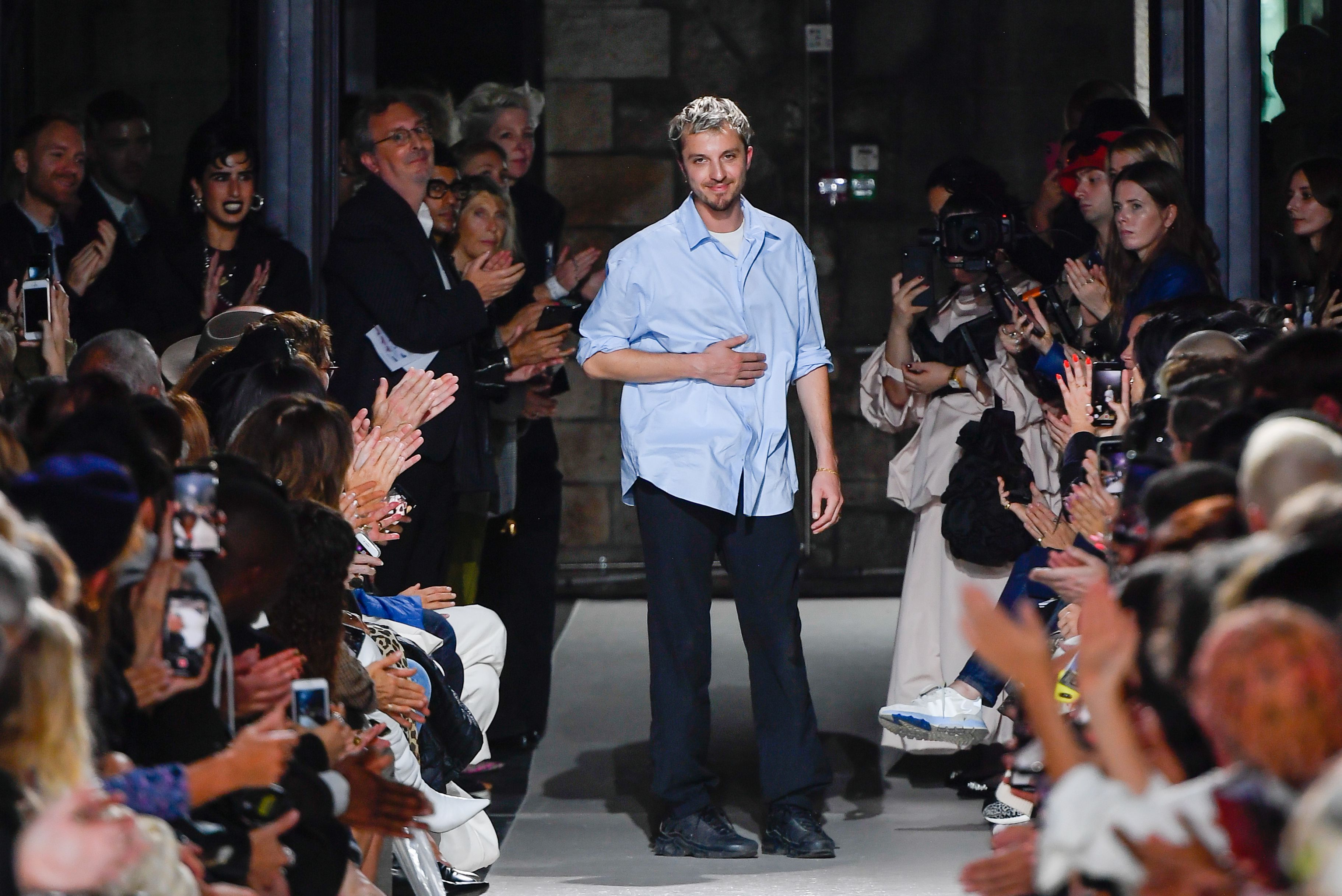 Glenn Martens on the catwalk of Y/Project.  WWD/Shutterstock

Martens moved to Paris upon graduation from the Royal Academy of Fine Arts after receiving a job offer from Jean Paul Gaultier.

“When you live in Paris, there are people and parties around and it’s kind of a little bit more exciting for young adults. But I think potentially it would have been easier if you would have been in Antwerp. I definitely recommend people to do it here, if they want to go for a brand independently,” he said. “It has easy access because it’s so close to everything. Life quality is also a bit better.”

Namacheko, designed by siblings Dilan and Lezan Lurr, is one of the brands that share the same mind-set as Martens. The brand’s operation is split between London on the commercial and communication side and Antwerp on the design and creative side.

“It’s a little bit the opposite of what many people have connotations with,” said Lezan. “For us, it’s dependent on the sort of manufacturing possibilities and the great resources that are available in Belgium, which was a lot more before than it is today. Still, there are some high-quality manufacturers here that are very used to working with fashion designers at a high fashion level rather than a commercial level. There’s a legacy to it which you can really feel once you’re here.”

“It’s a luxury to be so close to your factory and to have that control and dialogue as well, because that helps both the developer but also the production and the collection,” said Dilan, adding that the fact that he can speak to seamstresses in English directly has made the communication much easier, compared to working with factories in Italy or France.

Born in Iraq, growing up in Sweden and launching a brand that sounds like “raw chocolate truffles” in Japanese and that shows in Paris, the Lurrs choose to position Namacheko as a Belgian label. 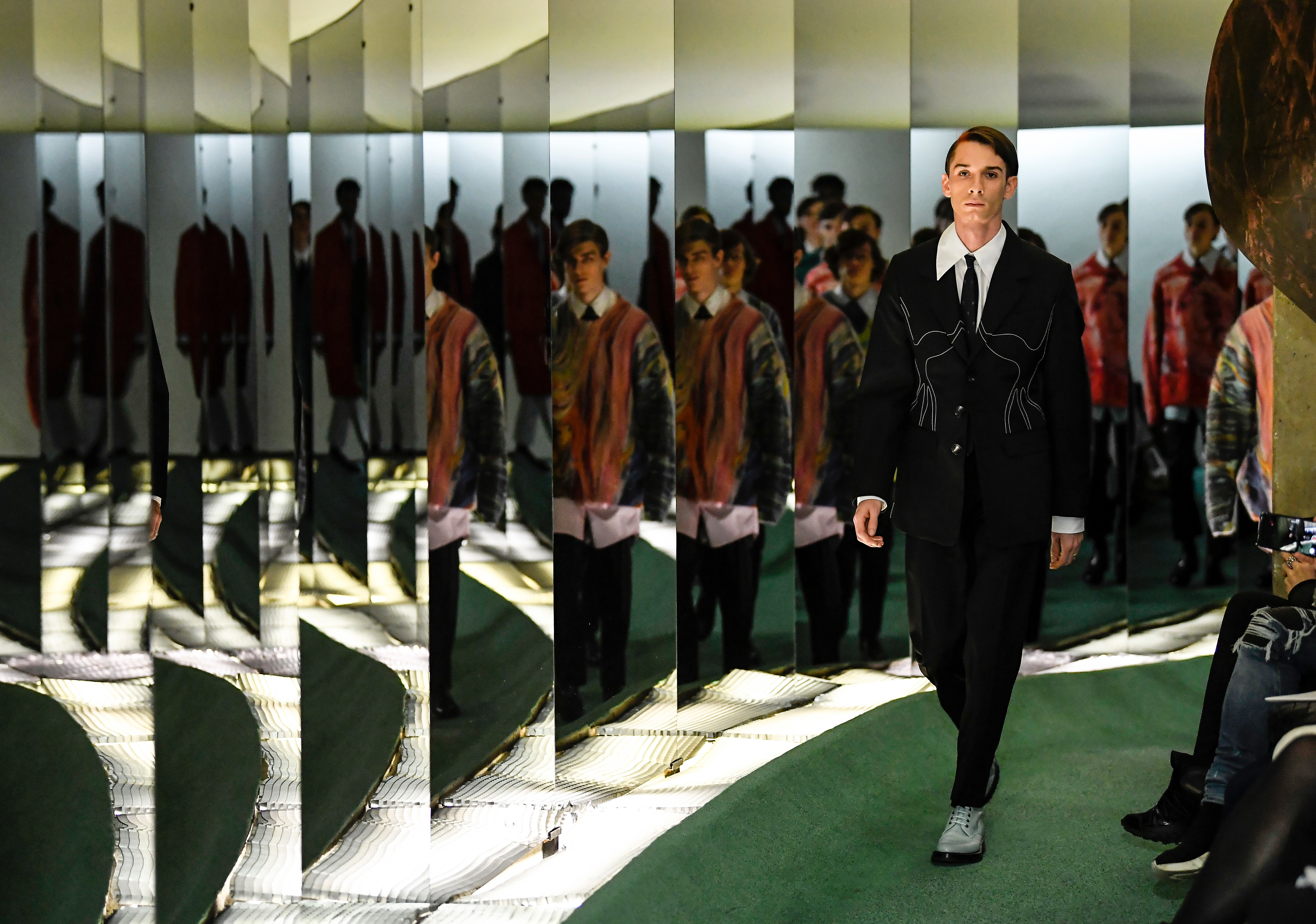 “I think even if we just take ourselves out of the equation, a lot of people from the outside would think Namacheko is very Belgian,” said Lezan. The brand has 47 stockists worldwide, with Japan its biggest market.

But what exactly does being a Belgian designer mean? Martens thinks the link is not in the design, but in conceptualism.

“I think that every single Belgian designer really needs a concept behind their creative artwork and product. They will rarely make just a pretty dress — there has to be a concept. Dries [Van Noten] makes his pretty dresses, but the concept of the print is actually why the dress is actually there,” he said. “Another thing about the Belgian way of thinking is that for every single thing there has to be a proper reason for it. Not just aesthetics.”

Raf Simons said during the fashion talks, in his first public appearance after leaving Calvin Klein, that “[Belgian designers] had an independent creative language” and “there was a community of designers being able to relate to each other one way or another.”

The downside is that Belgians are sometimes considered too conceptual, artistic or independent. Martens observed that “they have a bit of an old-fashioned way of thinking and designing because they are so at the most, they are so true to the concept and they really don’t want to compromise.”

For example, Antwerp shoe destination Coccodrillo closed its doors last May after 36 years, marking the latest independent multibrand retailer to shut as consumers shift to new shopping habits. The boutique, founded in 1983 by partners Geert Bruloot and Eddy Michiels, helped launch local designers such as Margiela and Simons.

Rakocz used to work for Ann Demeulemeester, Haider Ackermann and the recently deceased Josephus Thimister. Now she’s in charge of commercial and sales strategy at Templa, and she’s a mother of three children. Her other two partners, creative director Roberto Maniscalco and brand director Dellano Pereira, live in Melbourne, Australia. 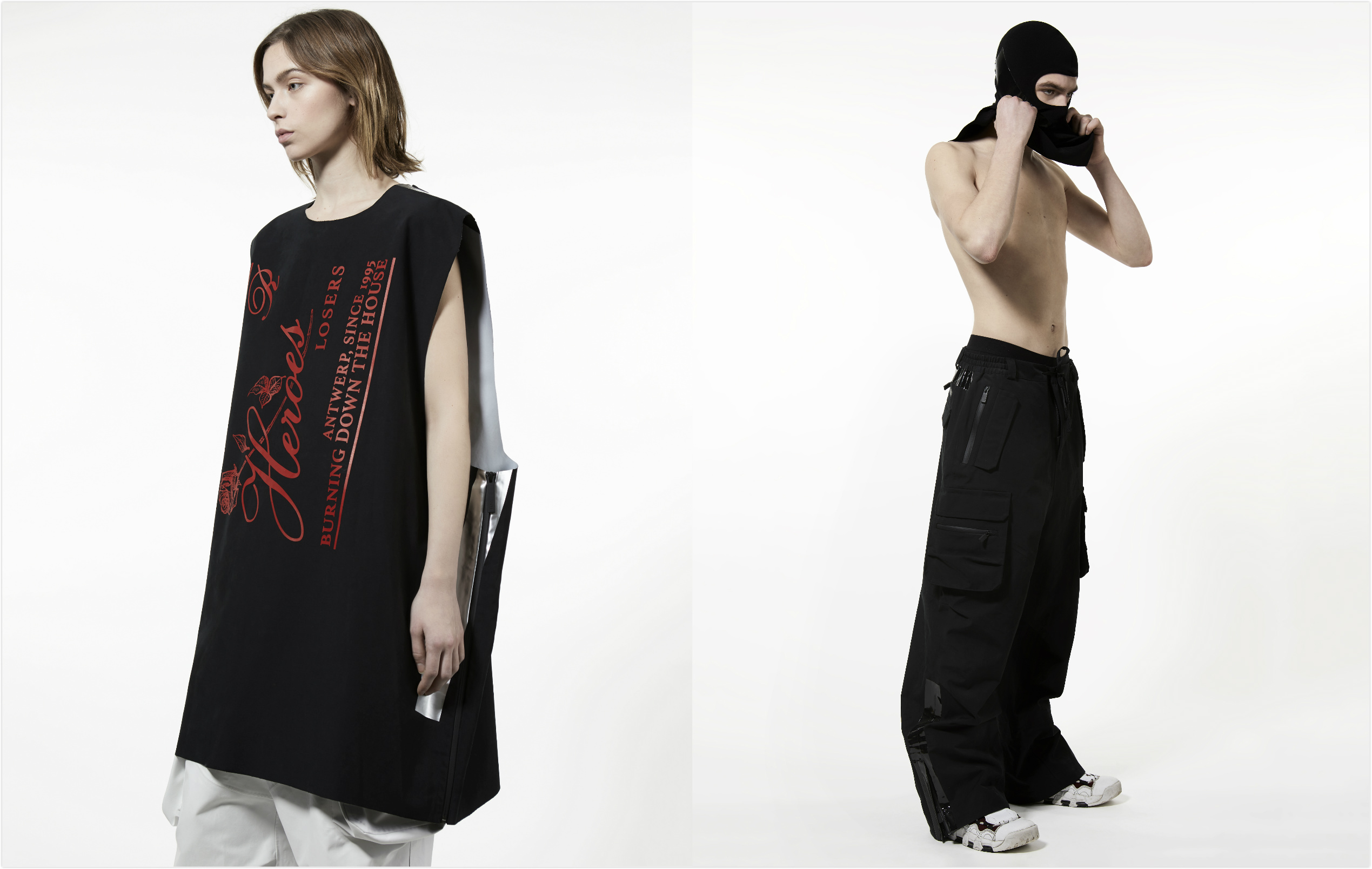 “There is a big tradition in Belgium of the heritage of design. There are students that go to the academy from international backgrounds and they all come here because they feel close somehow to the avant-garde aesthetic with a discreet design,” she said.

“None of the Belgian brands have ever been the ones that are shouting their brand. You walk down the street and you can recognize an Ann Demeulemeester jacket or a Dries coat. It says the craftsmanship without screaming a logo or a brand. And I think that really is where it sits. It’s that kind of beautiful, silent aesthetic that people have been following for decades now,” she added.

Rakocz sees Templa as a hybrid that bridges “extreme technical finishing, fabrication details of the true elements that you need in a snowboard and ski technical pieces” with the Belgian fashion attitude.

“The fact that the brand is very discreet and it’s not shouting a logo, a patch, a symbol that is recognized, but you can see it in the details,” she said.

A coincidental occasion let Rakocz befriended Bianca Quets Luzi, chief executive officer of Raf Simons, and a collaboration was soon proposed. A coat from the capsule is priced at $2,175, and a vest at $775.

Young brands aside, established Belgian labels such as Ann Demeulemeester are also evolving to embrace the younger generation. The Demeulemeester brand has over 400 points of sales worldwide. Its wabi-sabi attitude is particularly popular in markets like Italy, Japan and Korea. 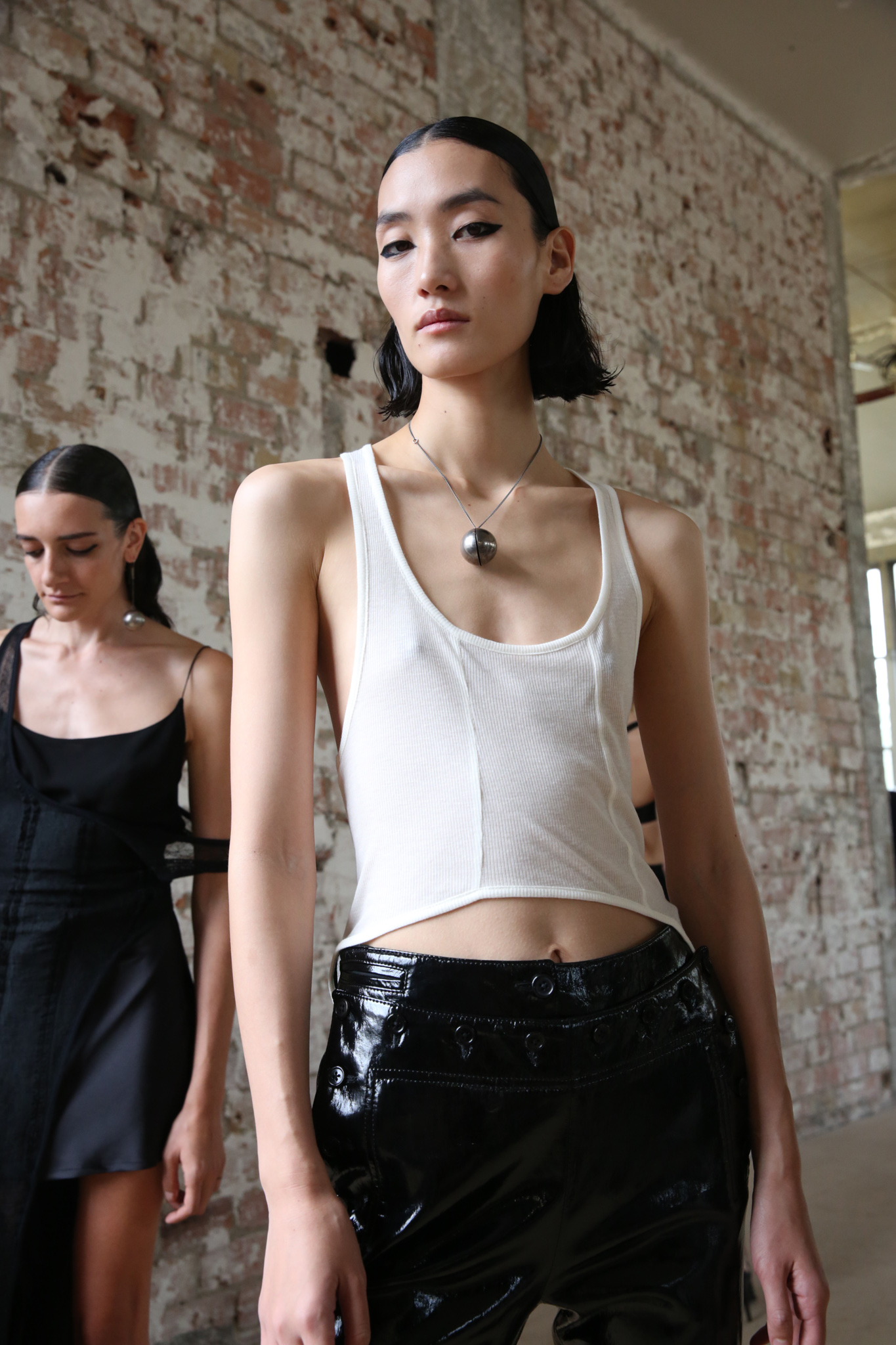 Sébastien Meunier, artistic director of the brand since 2013, said it is getting younger and younger. Young customers would come to Antwerp twice a season, one at the beginning and one at the end, to buy wardrobe staples, such as curly feather necklaces, leather boots and a draped dress.

Christian Wijnants, who used to work for Dries Van Noten and has been working on his own brand for the past 16 years, on the other hand, is aiming at the American market. He just signed with Purple PR in New York and he hopes that getting more American celebrities to wear his inventive knitwear, colorful prints and poetic designs can boost sales. The brand has around 140 stockists worldwide.

Pascal Cools, managing director of Flanders District of Creativity that organized the fashion talks and the Belgian Fashion Awards, said the organization aims to “help the creative entrepreneurs in starting and growing and innovating your business” in the city.

“The business model of the fashion industry needs to get an update. Designers are getting creative burnout and e-commerce is scaling retailers. We as an industry need to work on sustainability and technology because if we don’t do it ourselves, policymakers will enforce it upon us,” said Cools, admitting the challenges the city is facing.

Antwerp’s proximity to Paris, Milan, London, and even New York (a seven-hour flight) and rich history have made the city a prime spot for designers to base their businesses. However, as Asia becomes increasingly important in the world of fashion, for designers like Shuting Qiu, Antwerp may not be the best option any longer.

Shortlisted for the 2019 edition of the LVMH Prize and a graduate of the Royal College of Fine Arts, she believes Antwerp is a great launchpad. “The cost is lower here and you can easily find people who share a similar aesthetic vision to work together. But after spending four years here, I want to base my future and my business in my home country,” she said.

For consumers, though, Antwerp remains a city that resonates. Michael Mok, general merchandising manager at Joyce Hong Kong, said that “Belgian designers are romantic, creative and crafty. We have developed long-term partnerships with Dries van Noten, Ann Demeulemeester, Maison Margiela and Raf Simons. And we have also been seeing a new wave of Belgian brands like Templa and Namacheko gaining good momentum. We would like to seek more new Belgian designers in the future.”