Is There Room for All Those Bags?

Competition for main-floor handbag space has become red hot, as all types of brands look to break into the lucrative sector. 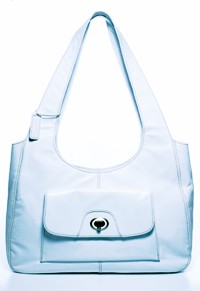 Competition for main-floor handbag space has become red hot these days, as all types of brands are eager to break into this often-lucrative category. Just as designer companies are chasing that ever-elusive “hot bag,” now more mainstream fashion companies are recognizing that a handbag offering can be vital to boosting — or buttressing — a brand.

But the constant stream of new handbag lines, especially in the last year, poses the question: Is there room for all of these bags and are there names that don’t belong in this category at all?

“There is only so much real estate on the floor, and now it has to be about having the best product and offering value,” said Jackie Corso, who, as chief executive officer of Nine West Accessories, has one of the largest portfolios of handbag brands in the business. “Consumers today are very savvy at every price point.”

Vendors and retailers throughout the industry said the lower- and midpriced handbag segment, with retail prices in the range of about $50 to $500, remains a growth area and is well positioned for spring. Strong sellers this holiday season included Dooney & Bourke’s It bag and handbags by Baby Phat and Fetish. Color and interesting uses of fabrics are giving an extra dose of energy to the category for the spring season, executives said. Nonetheless, there is finite space on store floors, and as more big-name brands enter and expand in this sector — consider the growth Coach has had in recent years — smaller or less-profitable firms are being squeezed out. At the same time, a constant complaint among consumers is that many department stores look similar and offer the same product assortment.

Danny Friedman, whose company, Daniel M. Friedman & Associates, has been actively building up its handbag division in the last year by producing licensed lines for such brands as JLo and UnionBay, noted that firms working with department stores now have to provide more than just the right product.

“It’s really difficult to be a small supplier these days,” Friedman said. “You cannot be in any business now unless you support that business with markdown money.”

Nonetheless, Friedman is bullish on JLo handbags, which he said is launching in about 400 doors for spring.

Industry observers estimate that the main-floor department store handbag business is at least a billion-dollar business at retail and often accounts for the biggest chunk of space on the floor.

Among the big-name newcomers now gobbling up handbag floor space are Ellen Tracy and Sigrid Olsen, both made by Liz Claiborne Inc.; singer Gwen Stefani’s L.A.M.B. line, which is produced under a partnership with LeSportsac, and Bandolino, a division of Jones Apparel Group. For spring, other brands hitting store floors include Elliott Lucca, started by the owners of The Sak; Echo Design Group, which is best known for its scarf offerings; the Fetish brand from the singer Eve, Baby Phat and the new JLo line. Nautica, now a division of VF Corp., is also stepping up its handbag offerings for spring.

Apparel giants Liz Claiborne and Jones Apparel Group now have a dominant position in main-floor handbags, and collectively account for at least 20 percent of department store floor space, according to industry executives. In recent years, the behemoths have increased their accessories offerings through acquisitions and by rolling out their existing apparel brands into additional categories.

Claiborne, in the last year, has introduced handbags for its Lucky Brands, Sigrid Olsen and Ellen Tracy divisions, and this spring, its Juicy Couture unit will unveil handbags.

The company also makes bags for its Liz Claiborne and Liz & Co. division, and there is always the possibility it will extend some of its other brands into accessories such as Laundry or Dana Buchman.

Jones now makes bags for many of its company-owned brands, including Nine West, Jones New York, Nine & Co. and most recently, Gloria Vanderbilt, Bandolino and Anne Klein, which has been taken in-house and will be relaunched this year. The Anne Klein business was recently purchased by Jones when that company acquired its parent firm, Kasper A.S.L. Jones also makes Esprit handbags under license.

While many brands are jumping into the segment, there are numerous labels that didn’t succeed in the field, especially ones that started out in other categories. Judith Jack, now a division of Jones, made evening bags for about seven years until that division closed last year. Judith Jack is a mainstay brand in costume jewelry and is best known for its use of marcasite.

“There are companies who should stick to their core,” said Nathalie Martin Schettini, who used to run Judith Jack’s handbag division and now has her own consulting business and showroom. “People are trying to diversify in every way possible. Now it’s all about the numbers. But if you don’t have a niche or fill a void, you are going to fail. I really believe there are people who should stick to their core.”

While there is constant pressure for publicly held firms such as Liz and Jones to continue growing and expanding, Corso said some of the brands Jones operates in its Victoria & Co. division don’t lend themselves to handbags. Napier, which specializes in jewelry, is one Jones brand that likely won’t be extended into handbags, she noted. Jones doesn’t break out sales of its handbag division, but accessories are a huge business for the firm, with wholesale footwear and accessories combined revenues of $711 million in the nine months ended Oct. 4.

Corso also noted that Jones is taking a number of steps to deal with an increasingly competitive selling environment. For example, Nine West handbags has “dramatically lower inventories” this year, she noted, and all areas of the business are focused on offering more value by providing something extra, such as flip-flops or cosmetic cases with many of its bags.

Although the business is dominated by giants, some smaller companies are managing to eke out more space. Fossil, best known for its watches, introduced handbags in 1996, and the line has become a key resource at chains such as Macy’s, Burdines, Lord & Taylor and Dillard’s. The company also sells handbags for its Relic division at mass and moderate stores, including J.C. Penney’s, Sears and Kohl’s.

Gail Stoke, Fossil’s vice president and sales manager for handbags, declined to give sales figures for the handbags, but said the division has had double-digit growth and now accounts for more than 10 percent of the company’s overall sales, which were $522 million for the nine months ended Oct. 4.

Stoke noted that the company has worked to maintain Fossil as a full-price business amid the promotional party that the main floor has become.

Ed Bucciarelli, who oversees the accessories division at Liz Claiborne, acknowledged that the handbag arena is bursting with new names these days, but said his firm feels strongly that there is space for more.

Lavelle Olexa, senior vice president of fashion merchandising at L&T, said she is optimistic about handbag sales for spring and echoed Bucciarelli’s sensibility.

“There is room for newcomers who have a distinct look,” she said. “We are always looking for newness and interesting items.”

Heidi Cohen, a buyer at Henri Bendel, said she has been trying to get away from bag lines that have wide distribution and is focusing on new designers, especially foreign lines that have limited distribution in the U.S. Nonetheless, Bendel is carrying the Juicy handbag line, since that label has a strong business at the store in apparel.

“It’s so important to keep customers excited,” she said. “The problem with handbags is that every store is starting to look the same. We feel strongly about having things that are different from other stores.”