When the designer allowed Douglas Keeve to film him working on his fall 1994 collection, it was a risky move, especially for a high-profile fashionista. 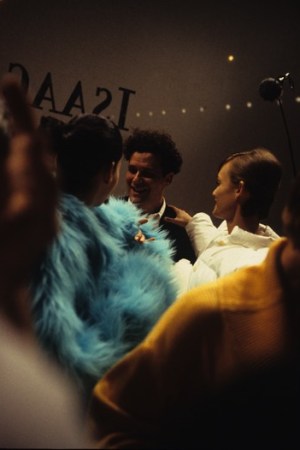 Nowadays the fashion documentary is chic, what with Matt Tyrnauer’s sleeper hit “Valentino: The Last Emperor” and R.J. Cutler’s “The September Issue.” But when Isaac Mizrahi allowed his then-beau Douglas Keeve to film the designer working on – and living, breathing and, sometimes, doubting – his fall 1994 collection, it was a risky move, especially for a high-profile fashionista.

But the resulting film, 1995’s “Unzipped,” wasn’t the only fabulous thing about Mizrahi’s gutsy reveal. The clothes sung, too. In one of the film’s final scenes, Mizrahi anxiously reads his WWD review, which was overwhelmingly positive: “Isaac Mizrahi really knows how to put on a show,” the review began. “He pulled everything together like the Isaac of old – the energy, the excitement, ideas and the joy.

“He started by turning the lights up behind a scrim, giving his audience a peek at what goes on backstage. But the real story was on the runway, where there was never a dull moment – literally. He had said this collection would be ‘insane with color,’ and he wasn’t kidding. He worked in a palette of a crazed artiste, mixing powder blue, cranberry, orange aqua and a plethora of pinks – poodle, pepto, powder and pez. Why be discreet when you’re tossing striped or plaid silk taffeta down jackets – so puffy, they looked inflated – over huge, hip-sitting ballskirts or floor-length fake “beast” coats over sequined nightgowns?”

Several “kinks” aside, the review concluded, “The man’s got a hit on his hands.”

Here, Mizrahi’s Nanook-inspired, neon-hued lineup in all its glory (including Cindy, Naomi, Linda, Kate, Carla and Padma Lakshmi), plus some of the more intimate moments WWD caught backstage.