In her first resort collection for Valentino, Alessandra Facchinetti focused on whimsical ruffles and bows, toughened up with clever touches like a chain mail-inspired bodice on this strapless gown. 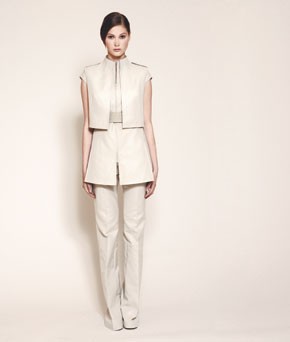 Structure is moving into resort, now lightened up by a pale palette. Case in point: Albert Kriemler’s architectural suit for Akris.

Resort continues with a distinct austerity that turns up in architectural shapes at Akris and an intriguing tough chic mood at Proenza Schouler. Meanwhile, Alessandra Facchinetti at Valentino is utterly romantic. And, in a show on Tuesday, Douglas Hannant offered lean shapes in dressy fabrics, such as a guipure lace chemise and a tailored suit softened by a languid silk and cashmere blend.

This story first appeared in the May 21, 2008 issue of WWD. Subscribe Today.