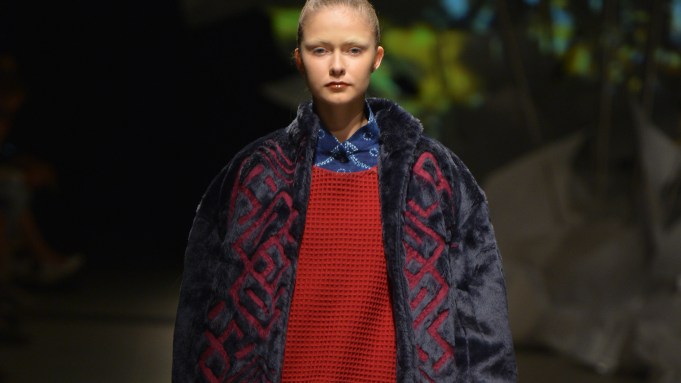 Fashion and design school Istituto Marangoni continued its 80-year birthday celebrations here on Tuesday night with a runway show and exhibition at The Mall in the new Porta Nuova business complex. Curated from four international satellite schools across Milan, Paris, London and Shanghai, the “80th Anniversary Back to the Roots Celebration” paraded 96 spring ready-to-wear looks from 16 graduates of its three-year undergraduate courses.

The show honored the inaugural campus established here in 1935 by Giulio Marangoni, which over eight decades has grown to five campuses, most recently a School of Design, which opened here in January 2014. Currently, more than 3,500 international fashion students from 106 countries study undergraduate, postgraduate and short courses on design, styling and business.

Milan-campus graduate and winner of the “Fashion Warrior”-themed show, Lu Huiyang, will continue with a master’s degree next month. “The teachers here taught me how to turn my ideas into reality using precise techniques,” she said about her collection of cocoonlike Neoprene dresses with woven rubber houndstooth panels. Other collections included slinky, latticed dresses over sheer slips from London-based Aleksandra Baranova and geometrically printed silk separates from Milan-based Marco Fusato.

“Every celebration should be a way to think about what we’ve done in our history, but the future will capitalize on bringing the Istituto Marangoni concept of ‘Italianess’ to international environments,” said group managing director, Roberto Riccio, on bridging its 80-year legacy with future projects.

By the end of 2016, Riccio is keen on founding ancillary schools in Miami, Singapore and Shenzhen, China. “We want to be everywhere,” he said, citing additional creative outposts such as South America and South Africa.

For his latest crop of talented graduates from emerging countries, he recommended that they pour their creativity back into their native markets by launching their own brands in their own countries. “It takes a lot of time and effort, but this is the moment to do it,” Riccio said.

In June, the school organized a similar runway milestone show of 16 ready-to-wear men’s wear collections in Florence. A gala dinner at Palazzo Corsini followed, where Riccio announced its newest campus to open there in October 2016. Also in recognition of its 80-year anniversary, a coffee table book from Rizzoli Publications launches in October, spotlighting the school’s extraordinary alumni.