There's a scene in the pilot of "Mad Men," AMC's new drama about the lives of New York ad execs in 1960. 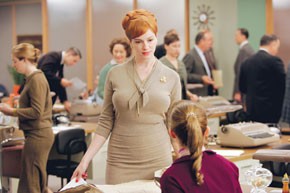 There’s a scene in the pilot of “Mad Men,” AMC’s new drama about the lives of New York ad execs in 1960, in which new secretarial hire Peggy is being shown around the offices of the fictional agency Sterling Cooper by a top secretary, Joan. Peggy is dressed in a roomy mustard pullover and flaring beige circle skirt, her hair pulled back in a beribboned cheerleader’s ponytail. Joan, on the other hand, is in the most body-hugging of sheaths — the better to flaunt her Monroe-esque shape — accented by a small sparkly brooch. Her lips pout red; her hair, equally flaming, is piled high in a sexy updo. While Joan’s hemline hovers above the knee, Peggy’s veers nearer midcalf. As they come to a stop near Peggy’s new desk, Joan dispenses some telling career advice: “Don’t take this the wrong way,” she begins, “but a girl like you, with these darling little ankles, I’d find a way to make them sing. Also,” she adds, “men love scarves.”

Those few introductory minutes set up all you need to know about the characters through their clothing. Audiences have costume designer Katherine Jane Bryant to thank for this. Bryant has done Western-meets-Victoriana threads for HBO’s “Deadwood,” for which she won an Emmy, as well as the gruesome attire in the recent “The Hills Have Eyes” movie sequel, but “Mad Men,” from Matthew Weiner, writer and executive producer of “The Sopranos,” is her first stab at a Sixties wardrobe. As Bryant is quick to point out, however, this isn’t the era of Mod madness. “This is just before,” the Tennessee native explains. “All my reference books are late Fifties to 1960. Grace Kelly, Sophia Loren, Ann-Margret. I watched [the 1960 movie] ‘The Apartment,’ with Shirley MacLaine and Jack Lemmon.” And, indeed, there are no whiffs here of Cardin or Courrèges, no Space-Age moon girls or wild Op-Art babes.

Being true to the historical era is key for a show like this, but Bryant notes that tending to the individual characters trumps all. “It’s about what motivates them and how the audience is going to read them when they’re in costume,” she says. So while good-girl Peggy (played by Elisabeth Moss) is dolled up in those conservative fit-and-flare numbers (some of her sweaters come with heart-shape buttons), flirty Joan (Christina Hendricks) is in form-fitting hourglass looks. There’s one she and Weiner have even dubbed “the naked-mouse outfit.”

This story first appeared in the July 17, 2007 issue of WWD. Subscribe Today.

“It’s a mouse-colored thing,” Hendricks says of the sweater-and-pencil skirt combo. “But it’s so tight, it looks like it’s been spray-painted on me.” Joan also has the accessories to match. “I wear a tiny, sleek gold ballpoint pen on a chain necklace. Joan’s a secretary, so it’s like the school teacher with glasses hanging sexily around her neck.”

The characters include a beatnik girl, illustrator Midge (Rosemarie DeWitt) — “she wears a lot of black,” says Bryant — as well as Stepford-wife suburbanites like Betty (January Jones), whose identity is being kept under wraps until the pilot, which airs Thursday at 10 p.m. Then there’s the show’s only high-powered woman, Rachel, head of her family’s Manhattan department store and a client of Sterling Cooper. She’s decked out in high-fashion ensembles, like the bright violet tweed suit she wears when the audience first sees her. “She’s shopping for her clothes in Paris, you know,” Byrant notes. Still, with all these different styles with which to work, the designer does have one ruling guideline when it comes to the Sterling Cooper offices: “No casual Fridays!” she says with a laugh. “The downfall of American style.”

Bryant has gone to remarkable lengths to dress her cast members in period-perfect gear. She designed some of the clothes, bought others at vintage-clothing stores and rented some from costume shops. Underneath them, the designer insisted on era-specific foundation garments, right down to girdles, to help the actresses get into character. “Your posture changes,” Hendricks says. “All of a sudden, my character has this swing when I walk, because the girdle is hugging my body and it’s very tight; it makes you aware of all your parts. You notice your hips are swinging from side to side.” But she also adds, “It’s a workout getting into it. As it’s gotten warmer, I’m, like, working up a sweat trying to get into that thing.”

Counters Bryant, “I tell them, it’s nothing like wearing a corset, so consider yourself lucky.”

As for the noticeable lift up top, the designer has every female on set — she dresses the main characters and the extras — in a Jayne Mansfield-esque bullet bra. “You can’t help but look at people’s breasts because they’re, like, pointing at you,” jokes Hendricks. “They really stand out. I’m sure the guys are going crazy.”

Not every attempt at authenticity, however, worked out. “The pantyhose we were wearing were actually from that time period,” says Moss. But Bryant had to switch to new ones because they couldn’t find them in the quantity they needed.

The men on the show have their own sartorial issues. During that period, for instance, men wore their pants high at the waist. “I tell them all the time, ‘Pull your pants up! I want them up past the belly button! By the end of the show, you’ll be so used to it, you won’t be able to put your Diesel jeans on,'” Bryant says. She even recuts the collars on contemporary button-downs to match the two-and-a-half-inch spread collar popular at the time. “And I go down half a size, because most men today buy their shirts too big,” she adds.

To differentiate among the actors, Bryant plays with the more subtle details in men’s wear. For example, she gives her actors different pocket squares and ties and also toys with color. Pete Campbell (Vincent Kartheiser), an underhanded young account exec, is dressed in flashy blues and yellows, while Don Draper (Jon Hamm), the agency’s creative director around whom the show revolves, wears lighter suits in shades of gray. “There’s a lack of color,” explains Bryant of the latter, “because he’s a character you can’t get a real read on.” This is the star ad man who opens a desk drawer to reveal that it’s full of identical, immaculate white shirts. He also delivers the following bon mot: “What you call love was invented by guys like me…to sell nylons.”

As the show develops, Bryant promises you’ll see a whole array of fabulous period pieces: peignoirs, burlesque costumes, cocktail attire. The style of some of the characters will evolve. And, indeed, by the second episode, you’ll even see newbie Peggy sporting that scarf.