When Liz Claiborne introduced Claiborne men's wear in 1985, the aim was to create a sportswear collection that was smart, comfortable and wearable. 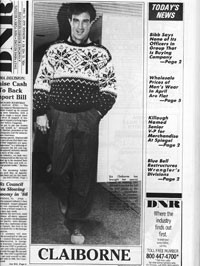 When Liz Claiborne introduced Claiborne men’s wear in 1985, the aim was to create a sportswear collection that was smart, comfortable and wearable. Twenty years later, these remain the fundamental tenets as well as the keys to the success of the brand, which enjoys a 16 percent market share in the collection zone at leading department stores.

Launched off the momentum of the well-known women’s line introduced almost a decade earlier, the men’s collection, simply titled Claiborne, was neither trendy nor basic. It created its own niche through interchangeable components, such as thick ski sweaters that were easily combined with plaid shirts and tweed sport coats.

“We were known as the first related men’s sportswear collection. We were the first men’s line to put together coordinated [pieces] to really outfit a guy,” recalled Karen Murray, group president of men’s wear, mid-tier, licensing and international alliances, who has been with the brand since 1992. She said that the early “Garanimals” approach of matching tops, sweaters and bottoms helped men take the guesswork out of dressing.

Claiborne was one of the first men’s brands to bring a women’s wear philosophy of collections rather than classifications to the sales floor, and its single-department model was another breakthrough.

“Claiborne represented a designer name with fair price points and coordinated sportswear at a time when the market was looking for an easy answer to casual dressing,” said Marshal Cohen, chief industry analyst at the NPD Group, a consumer and retail information company.

Other important changes occurred in the early Nineties, when Murray convinced the company to distinguish itself from the classic red, white and blue color schemes of competitors such as Nautica and Tommy Hilfiger by offering collections built on a neutral palette.

It was a solid foundation that anticipated the rise of corporate casual dressing a few years later. “Claiborne men’s wear already represented coordinated casual dressing. It had a lot of key components that made the value equation hit a home run for a lot of men at the time,” Cohen said of the brand’s neo-traditional styles.

According to Paul Fitzpatrick, executive vice president and general merchandise manager for men’s and children’s apparel and accessories at Macy’s West, the brand owes its continued success to adhering to these roots. “Claiborne is one of the most consistent, most successful brands in our men’s collections area, and it is a business we have in all of our doors,” he said. “This speaks to the very broad appeal that the Claiborne business has, specifically for our customer. I think they combine a good sense of style with updated fabrics that’s very understandable to a wide range of people.”

Claiborne’s transformation into a full lifestyle collection with many classifications, from suits and accessories to outerwear, also helped. Opening prices remain accessible: The range is $29.99 for a basic polo shirt to $695 for a high-end leather jacket. Although Claiborne targets the 35- to 54-year-old demographic, Murray said the reasonable prices have made the brand flexible. “Many times, the young guy right out of college will stumble on our product,” she said.

Claiborne’s approach of maturing with the consumer has been key, according to Cohen. “Guys are incredibly brand-loyal, and they trust the brand. They’re not out there on the trend edge. Their brand bestows the confidence in the consumer that they’ll fit in with the trend. To the average guy, that’s very important.”

Capitalizing on this brand heritage, the company introduced derivative labels of Claiborne to the midtier market, including Axcess at Kohl’s and Crazy Horse at J.C. Penney. Liz Claiborne has grown to encompass other labels for men, including DKNY Jeans and Lucky Jeans. Last year, Murray’s group launched Laundry Men’s in better department stores, the Metroconcepts brand in Sears, Tint at Penney’s and Stamp 10 at Kohl’s. Enyce, a men’s and women’s streetwear brand, ventured into the young men’s and specialty store sectors.

Overall, the men’s component makes up 15 percent of Claiborne’s $4.85 billion business, or about $727 million, though Murray said she is committed to developing it further. “Men’s is a big target for us. We want to grow men’s to be a bigger portion of our total portfolio,” she said, echoing the intentions Paul Charron, chairman and chief executive of the company, expressed this month. “I’d love it to be 25 percent of the company’s business, and maybe one day even 50 percent.”

Also on the horizon, Murray said, are international expansion in Europe and Asia, and potential acquisitions in the young, active or luxury niches.

Reflecting on her 15-year history with Claiborne that began in sales, Murray said her job, like the company itself, has continually developed. “It has evolved and changed — for the better.”