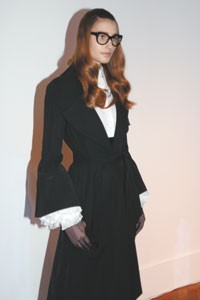 Givenchy: Another pretentious set up didn’t detract too much from Riccardo Tisci’s clothes, because, while his mise-en-scène — a cello player, models vamping in the middle of a crowded museum, faux lace makeup — was annoying enough, Tisci continues to flaunt the kind of talent that keeps everyone coming back for more. His arch glamour was on display in every gallery and included both real-world possibilities and otherworldly flights of fancy. And, with its smart tailoring and strong shot of femininity, it all looked very Givenchy. A sleek black coat was shown over a stark white blouse with fluted sleeves in stacked lace, in a nod to the house’s rich archives, while drama dresses included a long black gown bustling with lashes of ostrich and others cut in glistening ruby red. Of course, Tisci’s muse, model Maria Carla, landed the best dress of all, an impossibly voluminous white sculpted gown in silk satin named, appropriately enough, “Alba Maxima.”

Elie Saab: The aesthetics of Elie Saab’s world are crystal clear: Minimalism isn’t an option, ornamentation is de rigueur, and if a girl wants to be sexy she better be ready to flaunt the goods. His couture offering for spring was built on those principles, with a flurry of gowns that are sure to find red-carpet takers. After all, the Beirut-based Saab cited Audrey Hepburn and Brigitte Bardot among his inspirations. That meant plenty of straight-ahead pizzazz: slinky bustier dresses embroidered with rhinestones or sequins, high-slit glamour-girl gowns and floaty Empire-waist organza confections.

What about day? That’s really not Saab’s cup of tea — in fact, he didn’t even try, unless you call his fetching Charleston-style dress in silver and gold the kind of stuff a woman wears to lunch. Saab has a talent for decoration for sure, and a love for all that glitters, best exemplified by a few draped gold or silver lamé creations that were among the show’s most brilliant. This season he also showed a touch more variety in his silhouettes, bringing his style a small step forward.