Italian Brands Dress Up Down Jackets

A new and improved generation of down jackets is back on the fashion charts from a crop of Italian manufacturers and designers. 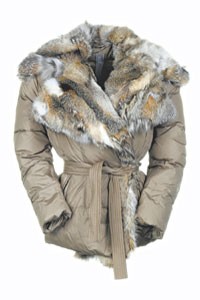 MILAN — A new and improved generation of down jackets is back up on the fashion charts.

A far cry from the nondescript puffy styles stocked in heaps for $30 at discount outlets, the latest looks in down jackets have morphed into hot must-have items for fall.

Just ask a crop of Italian manufacturers and designers such as Moncler, Add Down, Authier, Ermanno Scervino, Allegri and C.P. Company. Their injection of pizzazz into fall’s offering — body-skimming and cropped silhouettes; top-quality feathers that increase warmth but reduce volume; innovative fabrics such as silk taffetas, multicolored denim and fine nylon, and luxurious details such as hand embroidery or fox trim — has resulted in double-digit sales growth.

Wholesale prices run the gamut from $250 for basic styles to $2,500 for fur-trimmed ones.

“These jackets have an urban connotation. They’re not destined to parking valets who stand in the cold for 12 hours, but to a sophisticated consumer who wants a warm yet slim jacket with luxurious details,” said Maurizio Cittone, the chief executive officer of high-end outerwear specialist Add Down.

For fall, Cittone reported a 50 percent sales increase in the U.S. versus a year ago and a 20 percent hike worldwide. He cited Russia, Ukraine and Japan as other strong markets.

Fashion’s change of winds to sportier garb is also evidenced by the fact that Miuccia Prada sailed into new waters for fall, leaving behind ladylike prettiness in favor of a tough-chic current that spotlights roomy sportswear and a plethora of fur flourishes.

“With the flop of couture, many designers like Scervino transported intricate embellishments such as embroideries, passementerie, fur applications, etc., onto wearable and practical outerwear,” said Roberto Trapani, a co-owner of the trendy Vertice store in Turin, Italy. “We bought much more for fall, because it’s a key item.”

“We registered a 40 percent sales increase, which proves that people are finally realizing the potential for sophisticated outerwear,” said Daelli. “It’s ecological, warm and chic — you can easily wear the more elaborate styles over a chiffon cocktail dress.”

This story first appeared in the March 28, 2006 issue of WWD. Subscribe Today.

“In general, there’s a comeback to more sartorial and sophisticated outerwear, but since women are constantly on the move, they want practical jackets that are elegant enough to wear from day into night but also easy to pack,” said Autelitana.

Carlo Rivetti, chairman of Sportswear Company, the manufacturer for C.P. Company and Stone Island, said, “I believe that this trend has increased over the past five years, but it’s now really consolidated. The fall bestseller is a piece-dyed quilted silk and cotton muslin jacket. I believe that our success lies in the fact that we have transported our experience in men’s wear into women’s wear.” He also said that he offers function, technicality and more competitive prices (a jacket costs an average of $722 at retail) than what other women’s sportswear makers produce.

“This acquisition proves that we believe in the potential of the outerwear sector. We have reworked historical styles like the Fifties polkadotted quilted down with extreme attention to the materials, the interiors and finishes,” said Simone Badioli, Aeffe’s ceo.

He also cited fur-trimmed nylon styles as bestsellers, a combination that did well even at Moncler, Add Down and Scervino.

The coat of choice at Moncler’s new Gamme Rouge line, designed by Alessandra Facchinetti, was a cropped style bordered with silver-haired fox. In its first season, Gamme Rouge secured 120 sales points worldwide and reached its sales budget, also thanks to short and swingy winter classics showered with sequins, beadings and organdy petals.

Add Down’s Cittone said, “Our products are perceived as luxurious, which is why they are removed from similar styles available at mass market,” said Cittone. “We focused on ultralight materials and shrunken shapes, and to keep the jackets light, we use special resins instead of metal hardware.”

To that end, he showed jackets lopped from Japanese denim made with yarn-dyed Egyptian cotton that are luminous and soft, and a waterproof polyamide microfiber blended with liquid-crystal fibers that reflects the light.

Allegri tapped Viktor & Rolf to spin a new edge into its outerwear for fall. Based on the belief that the brand should exude a fashion aura rather than focus on single pieces, the duo put a modern twist on cinematic favorites. That meant coated silk down jackets with houndstooth print, and trenchcoats with tiny umbrella motifs.