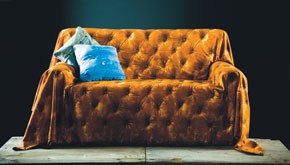 MILAN — Just how serious Italian designers are about their home collections is perhaps best expressed by Giorgio Armani’s modus operandi.

“This is a business,” said Armani, who showcased his latest Casa collection inspired by famed architect Eileen Gray during the Salone del Mobile international furniture and design show that ran April 16 to 21 here. “I never do anything unless it has a commercial, economic return.”

The designer’s home collection has grown. Last year, it reached sales of $52.1 million and Armani hotels and residences are slated to open over the next few years in locations ranging from Dubai and Milan to Singapore and Moscow. “I couldn’t have done this by selling a few scented candles,” deadpanned the designer, who takes pride in being able to present a full lifestyle collection with more than 30 pieces a season.

This year, two highlights of the collection were a chaise lounge with flexible armrests and a three-legged table made of shiny macassar ebony with a pleated effect. In terms of presentation, Armani has moved to a loft-style concept for the house and explored the combination of black-and-white, ivory and cream — a recurring theme throughout Salone. “People are looking for noncolor,” said Armani, noting colorful pieces underperformed compared with neutral hues last season. As the designer unveiled his new LCD television in collaboration with Samsung Electronics, he said a DVD player will be the next project with the South Korean electronics giant (the first was a mobile phone).

Armani also gave a few hints about the Milan hotel, located in the same Via Manzoni megastore that houses his Nobu restaurant. “It will be very intimate, but each room will be a suite, with a sitting room area in addition to the bedroom and the bathroom,” he said. Above the A-shaped building, Armani has designed a glass structure with special light effects. The 90-room, four-story hotel will open in 2010, a year after the Dubai hotel. The designer said his hotel in the Middle East will reflect a more playful environment, with projections of small camels walking in the desert on the walls of some rooms, while in Milan “it will be more about the details.” Armani said a hotel in Australia is also in the works.

This year’s Salone was further evidence of fashion designers’ push into the home arena. Versace, which opened its first boutique dedicated to its home collection in Milan during the fair, introduced its first cabinet. Sleek and lacquered, the cabinet’s drawers are lined in calf leather detailed with Versace’s iconic Greek fret. Donatella Versace also reworked prints by Berlin-based artist Tim Roeloffs, seen in the fall collection, on settees and pillows.

The home division is increasingly significant, as Versace Casa last year reported sales of $95.3 million, up 12.5 percent compared with 2006. Giancarlo Di Risio, Versace’s chief executive officer, said the line has grown during the past two years through a “more streamlined image,” and that the strength of the division is that the company doesn’t “simply sell furniture or upholstery, but a luxe Italian lifestyle concept.”

Bottega Veneta is also gradually expanding its product offering and this season introduced its first armchair, in partnership with Poltrona Frau. Named META, the high-backed armchair is made of seasoned beech and poplar wood and upholstered in Pelle Frau trademarked leather. Creative director Tomas Maier said the chair is “a new realm for us, with curves and cushions that are a world away from the clean lines and angular construction of our luggage-inspired furniture. That’s one reason we started with an armchair — a library chair — because books and libraries have been an inspiration and a motif for Bottega Veneta for a long time.”

Gearing up for its first hotel opening in collaboration with Mobygest next year, Moschino previewed quirky furniture in line with its tongue-in-cheek humor. Called My Better Half, the collection ranged from a red lamp to a black-and-cream sofa that only exists as half, with the other half reflected in a mirror. To be located in an 1840s neoclassical railway station in Milan, Moschino’s surrealist hotel will comprise 54 rooms and 15 suites.

Diesel also explored optical effects, with trompe l’oeil patterns, in its first home textile collection licensed to Zucchi Group. This being Diesel, sheets and throws are also made of denim in white or indigo, treated with classic processes such as stone washing. “The collection is about Diesel’s casual and rock ‘n’ roll living concept,” said Renzo Rosso, head of the brand. Rosso asked Zucchi to add real studs to Diesel’s towels.

“These pieces help young people rejuvenate their homes with accessible, seasonal flashes,” said Rosso, who hopes to reach sales of 20 million euros, or $31.7 million, in five years. Next year, Rosso hopes to venture into lamps and furniture, possibly with Moroso, a company he is in talks with.