The fate of the Italian textile industry will depend on presenting a united front against growing foreign competition, Milano Unica exhibitors and organizers said. 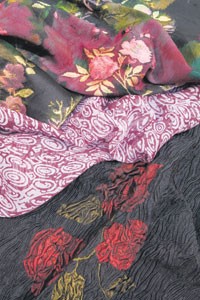 MILAN — The fate of the Italian textile industry will depend on presenting a united front against growing foreign competition, Milano Unica exhibitors and organizers said.

“Milano Unica is an important element in the operation to relaunch Italy’s finest textiles at a moment in which there is a need to be united,” a show spokesman said. “Today, more than ever before, the Italian textile industry feels the need to coordinate its efforts to better promote its image, characteristics, strength and leadership in the world.”

The effects of the European Union’s recent decision to lift quotas on the 87 million garments embargoed in European ports cast a shadow over Milano Unica’s union of Italian knitwear, wool, silk and cotton manufacturers.

“The fall of the barrier in European customs was the worsening of an already bad situation,” said Federico Boselli, president of Mario Boselli yarns and jersey.

Pier Luigi Loro Piana, co-chief executive officer of Loro Piana and president of Ideabella, said, “Being here all together is a marketing strategy to highlight together the Italian textile industry’s leadership to the world. We need to continue with the strategies that we have always done well.”

Italian distributors showcased their latest advances in technology for finishes and resistant fibers throughout the fairground.

Leone said Milano Unica opened up a marketplace of ideas and commerce.

“Having a presence among so many other designers was a positive indication that we will be able to expand our range of clients,” Leone said.

After years of research, Serikos showcased luxurious silk designs for winter at Ideacomo.

“People want more fashion and lighter fabrics,” said Beppe Pisani, Ideacomo president and head of Serikos. “As Italians are very good at designing, the Chinese are good at copying.”

He said there is a growing fear of designs and color blends being transmitted over the Internet.

“Only we have to sell at $20 a yard and they are selling nearly identical products at only $5,” Pisani said.

Boselli said he had no problems selling his high-end designs to top American clients like Donna Karan and Calvin Klein. American buyers make up 15 percent of total sales, he said.

“Things were bad, but we have been working triple,” Boselli said, after explaining how viscose and Lycra spandex blend jerseys will make for a cool layer for winter coats next year. “If we had just continued producing the same things, we never would have broken even.”

Pushing business with U.S. firms has given Como-based silk firm Frangi a boost. The firm ended 2004 on a positive note with $16 million in sales and a positive outlook for 2005. U.S. sales went up from last year and now constitute about 30 percent of total volume, with firms such as Tommy Hilfiger and Diane von Furstenberg among its top clients.

Frangi’s bold vintage and floral prints illuminated the maze of booths in Milan’s Fairgrounds. Asked what Frangi thought of having to sell goods this year in Milan rather in the silk capital of the world, where Ideacomo originated, Sabina Frangi said, “It’s better that we are all united now.”

For the family-run company, which sells and manufactures in the west, Asian competition was a wake-up call.

“We had problems with the speed of Asian manufacturing,” said Frangi. “In the end, it stimulated competition.”