Italians Add a Dash of Fashion to Fur

Fur has come full circle in the fashion cycle and has been transformed into a more trendy item along the way.

By Alessandra Ilari on May 3, 2005
View Slideshow 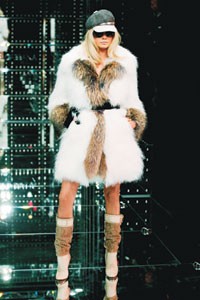 MILAN — Fur has come full circle in the fashion cycle and has been transformed along the way.

After becoming a coveted status symbol over the years, fur coats dropped off the fashion runways in the Nineties when minimalism kicked in and animal-rights crusades hit their peak. But fur has made a major league comeback in recent seasons with a modern mode, and nearly every designer sent fur looks down the runway during Milan Fashion Week this spring.

As a result, fur has become a growth category once again. Italy is the number-one country for fur production, totaling $845 million in 2004, according to research compiled by Pambianco, a luxury goods consultant here. Italy transforms 59 percent of the world’s pelts into garments. It exports 28 percent to Russia and 13 percent to the U.S., its top two markets.

Fall furs feature intricate embroideries, sassy combinations of fabrics, a feminine color palette and a plethora of shapes and lengths. Young women are wearing it for dressy or casual needs — over a bouclé suit or faded ripped jeans.

“Furs today are comparable to fabrics in terms of versatility and softness,” said Domenico Dolce of Dolce & Gabbana. “It’s now synonymous with style, luxury and glamour, and has shed its Eighties status symbol perception.”

Dolce has used skins generously in Dolce & Gabbana’s past two collections. He said a key look has been sheared astrakhan, which he said is soft and light. “It’s ideal when packing because it doesn’t crinkle,” Dolce said.

If there’s one company that never bypassed fur, even during the bleak years of minimalism, it’s Fendi.

“We certainly felt the fur activists’ pressure, but we never let them dictate what women should or should not be wearing,” said Michael Burke, chief executive officer at Fendi. “Karl Lagerfeld [Fendi’s longtime women’s designer], for example, was one of the first designers to strip the lining, making fur sexy and light. Today, it really is individuality versus status.”

Burke described fur as an “extremely versatile raw material that allows for creative freedom and lends itself to be treated and cut in many ways.”

This story first appeared in the May 3, 2005 issue of WWD. Subscribe Today.

Alessandro dell’Acqua, who used lots of fur in his signature collection and his Borbonese line, said, “Fur symbolizes femininity, glamour, but above all, power.”

Part of the credit for fur’s latest golden moment goes to the designers, who have encouraged suppliers to play with the classics by working with myriad pelts and treatments. This includes shaggy red fox, Barbuzinski sable, chinchilla, rabbit, white Siberian ermine, spotted lynx and silver-streaked Murmansky raccoon and orilag.

Suppliers usually stock up at fur auctions at places such as St. Petersburg for sable, Copenhagen for mink and Seattle for wild furs.

Nicola Paoletti, exports manager at sable supplier Paoletti, acknowledged that, unlike other furs, sable is not at the whim of fashion’s changing tides.

Bred in Russia, the best quality of sable is called Barbuzinski, the darker the better, and one skin can cost between $100 and $800 at wholesale.

With tanners and producers pushing the envelope in terms of shapes, shears, details and dyes, and designers upping their offerings to include anything from Davy Crockett hats to parkas, colored capelets and shaggy coats, fur has upped the cool quotient.

“Over the past decade, Italian fur producers have invested heavily to update their machinery for quirky finishes that allow them to provide designers with fur like mills supply silk or wool,” said Norberto Albertalli, president of Mifur, Italy’s top trade fair and the third- generation co-owner of the 96-year-old fur maker Albertalli. “That’s why fur today is part of the fashion circuit, just as any other fabric or garment is.”

Albertalli added that shearing mink to a width of 3 millimeters, along with giving fur a wet look, a supple peach hand or laser cuts, have all contributed to boosting fur’s funky factor.

At fur specialist Cavaggioni, weaving fur strips like a yarn is the house’s specialty.

Wholesale prices for a mink sweater, which takes two skilled workers five days to make, range from $1,950 to $3,900.

Until recently, fur was used to weather the winter chill, but designers are now treating it as a year-round item.

“Fur is used year-round and our clients buy new furs the same way they buy a new bag each season, because luxury is about individualism,” said Burke.

Giuliana Teso, which has been churning out fur coats for the past 25 years, said it is reaping the benefits of the investments made over the years.

“Like any other apparel item, fur today has to have added value,” said Teso.

Specializing in sable, mink and broadtail, Teso turns out 30,000 units that boast special techniques such as 24-karat gold trimmings, dusty rose dyes with a sheen, hand embroideries and beadings and sheared mink coats that are reversible and lightweight.

Dolce said, “Fur is a creative expression that the consumers can interpret based on their personalities.”

In that vein, Teso highlighted the benefits of sable. A top-quality, hand-finished sable coat with elaborate details can retail for $150,000.

“What women wouldn’t dream of wearing a great sable coat? She certainly wouldn’t go by unnoticed,” he said.