A short film dedicated to the late honorary chairman of the Camera della Moda, and presented on the association's online platform, kicked off Milan Fashion Week.

MILAN — It was only fitting for Milan Fashion Week to kick off Wednesday with a tribute to Beppe Modenese from Italy’s Camera della Moda, the late honorary chairman of the association.

Modenese died a few days before turning 93 on Nov. 21 last year. The date of his death is the title of the short film dedicated to Modenese, directed by Beniamino Barrese and produced by The Blink Fish, and shown on the Camera’s online platform.

Excerpts from archival interviews with Modenese run throughout the video, as images from his exquisitely furnished home are juxtaposed to those of Milan and its recognizable buildings dotting the city’s skyline, from the storied Velasca and Pirelli skyscrapers to the more recent Fondazione Prada Tower, marking the evolution of the city and its fashion industry, which owes so much to Modenese.

Nostalgia is kept at bay by showing Milan and some of its iconic locations dear to Modenese, such as the La Scala theater or the Caraceni atelier, contrasting with the city’s new building sites, suggesting the city’s potential and future growth. In fact, while admitting the times have changed, and pointing wistfully to the “generosity” of designers in the early days, Modenese realized it was necessary to accept the changes and be attuned with them.

Modenese’s personal history is shared through his photos posing with a young Giorgio Armani, Laura Biagiotti or Gianfranco Ferré. In one of the interviews he was asked about his nickname, “the Prime Minister of Fashion,” bestowed in 1983 by legendary publisher John B. Fairchild in WWD, but Modenese throughout the film humbly pointed out that he merely contributed to giving Italian designers “self-awareness” and building a system that would offer services to the industry.

“I worked hard,” he admitted, which led to creating “new wealth and professions that played an important role” in shaping Milan and the fashion system.

His career in fashion started in the Fifties in Florence working with Giovanni Battista Giorgini and together they organized the historic show at Palazzo Pitti’s Sala Bianca in 1952 featuring Roberto Capucci and Emilio Pucci, among others.

He confessed that, “to learn about fashion,” he would travel to Paris in an overnight train in third class to save on his hotel bill in his early days — yet another example of his determination and industriousness.

In 1953, he was among the founders of the Sindacato Italiano Alta Moda that later became the Italian Chamber of Fashion, which he led for many years.

After a few years spent working for Esteé Lauder and for Chanel, in 1978 he created MODIT, an institution aimed at organizing fashion and lifestyle events.

An additional personal touch in the film was conveyed by Modenese admitting his contradictions. He never wore a watch because he wanted “to escape the passing of time,” but his home was full of ticking clocks, reminding him “that the hours are passing by.”

Modenese would never be seen without wearing his red socks, highlighted at the end of the film in a touching reminder of his elegance and his persona. 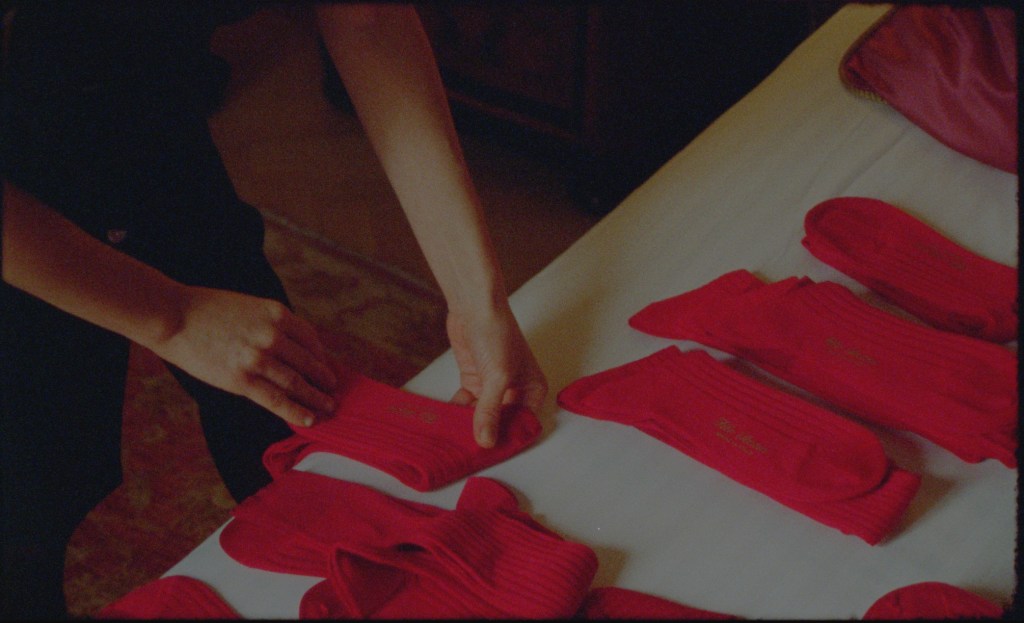