URBANIA, Italy — Pick any sequined, embroidered, stonewashed designer denim pants and there's a good chance they are made in Urbania, a city located in the Montefeltro valley, also known as the "Denim Valley." 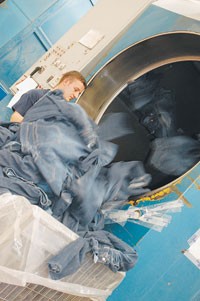 URBANIA, Italy — Pick any sequined, embroidered, stonewashed designer denim pants and there’s a good chance they are made in Urbania, a city located in the Montefeltro valley, also known as the “Denim Valley.”

Nestled in central Italy between Tuscany, Emilia Romagna and Umbria, this stunning green valley is also tapped as the “Blue Valley” by the cognoscenti because of the area’s production of blue jeans, valued yearly at around $260 million, or 200 million euros at current exchange rates.

Although Italy’s manufacturing strength rests heavily on the web of its production districts, from Belluno’s eyewear and Scandicci’s leather goods to the Valle del Brenta’s footwear excellence, the Montefeltro area is better known to fashion insiders.

“We never had the culture of branding, and for years we were content with working behind the scenes for other companies,” said Augusto Gamberi, general manager of Blue Line, which produces the Jackerson line.

Blue Line was founded in 1976 by Franco and Mario Stocchi.

In addition, partly because of the people’s prickly and proud personality, there never was a group-oriented, associative mentality, which usually helps generate interest and support.

“The mantra has always been to each follow one’s own strategy,” said Carlo Gallo, sales manager at Blue Jenius, which holds the European license for Parasuco Cult and produces the Crosby Hallen & Cobb line, available in the U.S. at Barneys New York and Fred Segal and Maxfield in Los Angeles.

Gallo, a Turin-born entrepreneur, said the status quo is changing, however, as the valley has been hard hit by competition from China and other low-cost countries. Blue Jenius itself, which was founded in 2003, is strongly focused on research, design, marketing, advertising and communication — departments which were generally entirely overlooked in the Eighties.

The strength of the Montefeltro district used to lie in its specialized know-how.

“These companies have an enormous flexibility, they quickly adapt to new situations, they are extremely fast and organized, and offer full-proof service,” said Augusto Calzini, a former professor at the nearby Urbino University and author of the book “The Denim Valley.”

As labor costs increased here in the Nineties and could not compete with wages in China, Turkey, Tunisia and East Europe, these firms, said Calzini, “have been reorganizing their strategies,” opting for privately owned brands and licenses, investing in new technologies, venturing into distribution and eventually outsourcing.

“Volumes are smaller compared to the Eighties, but there has been an increase in revenues, as much as three, four times reaching about $260 million, or 200 million euros, last year,” Calzini said, “although many smaller laboratories and at least 15 companies had to shut down.”

Today, the more relevant companies are no more than a dozen, which continue to work with about 20 to 30 small outside labs and finishing firms in the area.

“A strong euro, post-Sept. 11 difficulties and a shift toward higher-end products to the detriment of the medium-priced range, have spurred companies to come up with new strategies to survive,” said Tarcisio Galavotti, general manager and co-owner of Italian Fashion, founded in 1983, which holds the Fiorucci license and has worked with Fornarina, Kookai and Swish.

Galavotti said that licensing and branding were not part of the mentality of the people in this area. “They are great workers but don’t care about success per se or being in the limelight,” he said.

After the Eighties bonanza, one way to find alternatives was to launch privately owned brands. In 1997, Italian Fashion launched the young Maggie line, followed by the edgy Zsa Zsa Lawinsky label. Maggie’s bestseller: stretch pants with a vintage effect, retails at $141, or 109 euros.

“We are all aiming at a higher-end range of the market at the risk of saturating it,” said Galavotti.

A more exclusive product, with sophisticated treatments and finishings, was actually key to the survival of the district.

“Denim continues to be such a hit, because it constantly evolves and becomes more and more elaborated,” said Gamberi.

Although most of the production steps today are outsourced in Romania, Tunisia, Turkey and southern Italy, these companies are structured so that they work with the best suppliers and artisans.

“Cost of labor here is 10 times as much as in China, where $100 is the monthly wage of a worker, but all the research, washes and treatments are done here,” said Gamberi, noting that Blue Line invests 5 percent of revenues in research.

In 2004, the company reported sales of $78 million, or 60 million euros, up from $65 million, or 50 million euros, the year before. Blue Line has its own production plant in Romania, where it employs 200 people. In total, the firm produces up to three million pieces per year, also working for large northern European apparel groups.

“This is a very complicated business, and even designers that decided to take production of samples in-house are coming back to us,” said Michele Fuligni, chief executive officer of Incom Industria Confezioni Moderne SpA, which also owns a production plant in Romania.

“We offer know-how, synergies, integration, vertical production, treatments, washes, finishes and research, and we deliver a sample 12 months in advance,” said Fuligni, pointing to racks with items from the spring-summer 2006 collections. “To each his own, we don’t offer distribution services, but we are good at looking ahead and preventing problems. There are models that need up to 13 manual finishing steps or five weeks for a wash —it’s all very difficult to coordinate, and that’s what we are here for.”

He said it can take up to 12 weeks to produce a pair of jeans.

Incom, founded in 1969 by Michele’s father, Giuseppe, is working with companies such as Aeffe, owner of Alberta Ferretti, Moschino and Pollini, Escada, Guess, Calvin Klein, Fornarina and Jean Paul Gaultier. In the Eighties and mid-Nineties, Incom also produced its own brand, Durango Jeans. With yearly revenues of $23.4 million, or 18 million euros, the company produces 1,300 models, between 18,000 and 22,000 samples per year, or between 700,000 and 900,000 finished pieces per year.

“Denim is the only material comparable to a three-dimensional canvas for the artist; it represents the idea of a dream; there are no other fabrics that allow these kind of treatments and experiments,” said Paolo Fuligni, brother of Michele, president and in charge of product and style. At Incom, 99 percent of production is derived by denim.

One of the main washing and finishing companies in Urbania is Leontex, where denim is scratched with sandpaper, washed with pumice stone, sprayed with chlorine or oxyhydrogen flame, repainted and cut up. At Leontex, it is not surprising to catch a group of Chinese workers manually treating the fabric.

“They are fully integrated and often set up their own small labs in the area,” said Leoni. “After all, their manual skills are exceptional, they are fast and constant, and they work like machines.”

Leontex works with such companies as Benetton, Burberry, Hugo Boss, Diesel, Sixty, Replay, Iceberg and Gant. Up to 300 pairs of pants fit in one of the huge dryers at Leontex. The company puts out 15,000 jeans per day. Quality, not quantity, however, is a priority here.

“Research is pivotal, we must get there before the others,” said Antonella Leoni, ceo.

“Denim evolves by the day, the market is determined by the offer and it is up to us to come up with the right stimuli and emotions,” said Alessandro Gramolini, product coordinator manager at Blue Jenius.

Gallo concurred, noting that speed, too, is pivotal: “We must always keep updated while setting the trends — those that follow them are doomed.”

In general, while embroideries, sequins, and studs, in addition to vintage effects, will continue to be the main trends for a while yet, bottoms will be tighter and closer to the leg.