Men's wear exhibition Pitti Uomo this month heralded denim in all its variations, shapes and treatments as one of the most practical, versatile and innovative fabrics in history, and deemed it basically immortal. 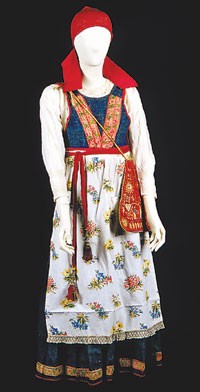 FLORENCE — Men’s wear exhibition Pitti Uomo this month heralded denim in all its variations, shapes and treatments as one of the most practical, versatile and innovative fabrics in history, and deemed it basically immortal.

Diesel owner Renzo Rosso was given the Premio Pitti Immagine Uomo award and two exhibitions focused on denim: “Jeans! The Origins, the American Myth and the Made in Italy” at the Fabric Museum in Prato, outside Florence, and “L’altro Jeans. Il faut laver le jean de ses idees,” which marked the 40th anniversary of jeans makers Marithe & Francois Girbaud.

“It’s comfortable, practical, you can pack it away and don’t need to iron it. It’s the most adaptable fabric, it can be transformed endlessly — it will never die,” said Rosso, noting that, according to Diesel research, denim is most often associated with nature, open spaces and weekend leisure. As for trends, Rosso is betting on the low-inseam pants for women and men.

Rosso will mark his 50th birthday in September with a book called “Fifty,” which he will introduce on Sept. 10 in New York, two days before the Diesel show there. Just don’t call it a memoir. “It’s a new concept, full of photos, modern and creative,” he said.

For the “Jeans!” exhibition, curator Daniela Degl’Innocenti explored the historical changes of denim, showing more than 100 pieces from public and private collections tracing the evolution of the material, whose name originates from the Italian and French cities of Genova and Nimes (jeans and denim), respectively. Before it became the trendy, technological and innovative material it is today, denim was mostly worn by the working class and was called fustian, a blend of cotton and wool or linen dyed with indigo or woad-plant, a plant native to northern Europe that produces a blue dye. The exhibition, which begins in the 17th century showing statuettes wearing denim, shows such American labels as Levi, Strauss & Co., Lee and Blue/Bell Wrangler, all dating from 1920 to 1960. Another section focuses on Italian companies such as Carrera, Closed, Fiorucci, Meltin’ pot, and Rifle that reintroduced jeans to Italy between the Sixties and Eighties. The last section includes designer denim jeans, including Roberto Cavalli’s rose-printed pants, Dolce & Gabbana’s denim jacquards, Diesel’s Japanese stretch denim and vintage metal studs and an array of Miss Sixty’s innovative techniques. The exhibition kicked off on June 22 and will run until Nov. 30.

Francois Girbaud, surrounded by well-wishers at the 21,600-square-foot space within the Stazione Leopolda in Florence, where the “L’Altro Jeans” exhibition runs until July 10, dismissed the idea of a celebratory exhibition. “This is all about work-in-progress and the technological evolution [of the brand],” said Girbaud.

“We wanted to tell stories about the different treatments, running from the stonewash period to the more contemporary laser treatments,” said architect Kristian Gavoille. As Girbaud is increasingly concerned about the environment and the pollution that treatments such as stonewashing create, Gavoille set up a pool with (mock) dead fish floating in the water. Live fish swim happily in another part of the show, displaying how more ecological techniques have replaced stonewashing.

Red lacquered 20-foot stylized giants positioned throughout the exhibition mark the route of the show, which spans from 1976 stonewashed pants to the Blue Eternal pants of 2000, which never fade, to today’s stretch pants.

“Pitti Uomo never staged a denim exhibition before, nor did the Girbauds,” said Raffaello Napoleone, chief executive officer of Pitti Immagine, which organizes Pitti Uomo. “We didn’t want to write the history of fashion, but with Marithe & Francois Girbaud we found the best way to talk about jeans: to focus on fashion, research, contemporary living in fabrics and finishings, details, cuts, washes and colors,” he said.

“We are born with denim and we die with denim, this is no longer simply an American concept,” Girbaud summed up. And his best model? “Tomorrow’s.”