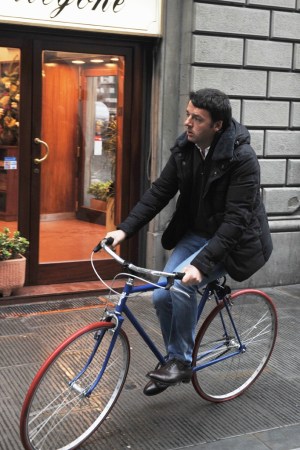 Matteo Renzi was sworn in on Saturday as Italy’s youngest prime minister and on Monday he faced a confidence vote before the Senate, to be followed by one on Tuesday in the lower house of parliament, the Chamber of Deputies — a vote he already appears to have won from Italian fashion entrepreneurs, executives and designers, who largely expect him to fix several of Italy’s thorny problems.

First supporter: Brunello Cucinelli, who likened Renzi’s modus operandi to that of Pope Francis. “I think he wanted to give a very quick turn to things. He realized that speed was necessary, just like Pope Francis, who in a year-and-a-half overturned everything in terms of spirituality and religion. We need to change things quickly,” said Cucinelli.

The entrepreneur has known Renzi for years, working with him on Pitti Uomo when Cucinelli was on the board of the men’s wear trade show and the politician was president of the Florence province. “I believe Renzi is the man that first realized and felt the need for a great renewal of Italian politics. Starting with the language, making it more understandable to everyone. He has used the arm of conviction and simplicity. He is very intelligent and understood that to be creative we must be true.”

Cucinelli underscored how Renzi returned to speak of “speed, dreams and truth” at a time when the country is trapped by immobility, clogged by constant quarreling between the numerous parties, personal agendas and Byzantine rules.

He also compared Renzi to President Obama. “Like Obama, he was the first here that had the courage to say that those that earn very little should earn more,” said Cucinelli, lamenting the heavy taxation employers endure in Italy. “It’s not that I want to pay less to the state, but our employees should earn more.”

Wearing his entrepreneur’s hat between his two Emporio Armani shows, Giorgio Armani echoed Cucinelli’s words about the costs incurred by companies in Italy and urged “a real attention to issues, not just idle chit-chat.” Armani said politicians need to understand that “such heavy taxation on the industry” is a problem. “They need to help industrialists to be able to work; it’s time to find solutions,” the designer said.

On Monday, Renzi tweeted “fight bureaucracy,” while he reportedly used the word bravery in his speech to the Senate. Renzi has been promising to “pull Italy out of a quagmire” after he ousted his predecessor, fellow party member Enrico Letta, whom he accused of bringing the country to a standstill. Fighting a stagnant economy and an unemployment rate of more than 12 percent are priorities, in addition to changes in the electoral law that has allowed small parties to create significant instability in the country.

At 39, Renzi “is young but very well-prepared for his role,” said Andrea Della Valle, president of Hogan, adding that he “wants to have faith” the politician will succeed in the reforms he has promised to bring to fruition every month. The first four issues on the table are unemployment, public administration, taxes and justice, he noted. “The moment is too delicate for Italy, but he has surrounded himself with quality collaborators,” said Della Valle before the Fay show, also part of the Tod’s group of brands, together with Hogan.

Renzi is often spotted with Della Valle and his brother Diego, who together own the Florence soccer team. The siblings have been vying to build a new stadium and sports center for years now and Renzi is said to be partial to the project. (Diego Della Valle declined to comment for this story.) Asked about Renzi’s fashion style, Andrea Della Valle responded: “I like the way he is, casual chic. He doesn’t much like ties,” he said with a smile. Renzi is known to favor comfortable and functional looks, wearing jeans and white shirts, for example, but, as fashion veteran Beppe Modenese put it, he is “very attentive to form when needed.”

Also, Della Valle underscored how Renzi is aware of the importance of the fashion industry.

Also at the Fay show, Vogue Italia editor in chief Franca Sozzani nodded in agreement. “I am very optimistic; he is young and wants to make changes,” she said.

While concurring, Massimo Ferretti, chairman of Aeffe SpA, which controls the Moschino, Alberta Ferretti and Pollini brands, said, “We don’t necessarily need attention on the fashion world but rather on the management of the country in its complexity.” Ferretti urged the streamlining of bureaucracy, a change in the “judicial system that foreign companies don’t understand. It is indispensable to simplify regulations.” Ferretti said he was “very happy” with Renzi’s arrival on the political scene, admitting there are big expectations. “He is a person that can give a new face to Italy, a country that comes after Germany as an industrial power but has had an absolutely inadequate political management. We have been projecting the wrong image. With careful management we can bring Italy back to the top echelons” globally.

Last week, Gildo Zegna, chief executive officer of the Ermenegildo Zegna group, while presenting a 25-year, $34 million scholarship to promote Italian talent, said of Renzi: “He is the right person in the right place, energetic and positive. He is young and fit to bring the country forward.” Zegna urged changes, “otherwise our younger generation will be unmotivated, without faith in the future and negative on the growth of the country.”

A Florentine contingency was also in Milan for fashion week and could share first-hand comments on Renzi’s previous role as mayor of Florence.

Patrizio di Marco, president and ceo of Gucci, said he was “a friend, a good person and very capable.” Renzi has sometimes been accused of being overly ambitious, but di Marco claimed that “ambition is positive, I hope it helps him to do what the country needs.”

Renzi was instrumental in helping to bring about Gucci’s acquisition of the bankrupt Richard Ginori brand last year, with the company pledging to restructure the 280-year-old company and safeguard its employees.

During a TV interview last year on the takeover, discussing Gucci’s French ownership, Renzi declared that he was “not worried” about foreign groups taking control of Italian brands “as long as production remains in Italy, continuing to boost employment here.”

Fellow Florentine Roberto Cavalli revealed that Renzi has plans to “extend what he’s done for men’s in Florence to women’s.”

Ferruccio Ferragamo, chairman of the Salvatore Ferragamo group, said that ultimately Italians should “count on [single] men as parties don’t count,” and praised Renzi for “giving faith back to Florentines. They now believe again that things can be done.” Renzi banned traffic from the city’s main squares, “freeing them and returning their beauty to Florentines.”

Ferragamo believes the mayoralty offered good training to Renzi, as he acknowledged that Florence is “not an easy” city to oversee “because of its history — even its pavements need to be safeguarded.” Ferragamo recalled how a few years ago, at a dinner with members of the fashion industry, Renzi knowledgeably described in detail the need to recover a hidden Leonardo da Vinci masterpiece, “The Battle of Anghiari,” believed to be entombed behind a Giorgio Vasari fresco at Palazzo Vecchio, the city hall.

Ferragamo ceo Michele Norsa said that, in light of his work in Florence, Renzi “has the skills to succeed” nationally. National priorities in Norsa’s opinion are the “creation of infrastructures, such as new airports, the extension of visas and the promotion of missions abroad.”

Franco Pené, chairman of Gibò, based in Impruneta, outside Florence, which produces for Jean Paul Gaultier, Michael Kors and Roberto Cavalli among others, said Renzi was “the only one that has a consensus,” given the number of supporters. “If he fails, I don’t know what will happen. Letta is a fine politician but he is a product of the system, while Renzi is an element of rupture in that system. Just see how he secured his role as prime minister,” said Pené.

Furla chairwoman Giovanna Furlanetto defined Letta as “a gentleman and well respected, but he had reached a dead end, even [manufacturing and service organization] Confindustria was unhappy.” Renzi is “brazenly ambitious, and he admits it,” but elbowing out Letta was “what the country was asking for.” Now Furlanetto hopes for stability, referring to Italy’s third government in one year. “We can’t pass the baton any longer. This is almost ‘Mission: Impossible,’ the problems that Renzi faces, but he is enthusiastic and young and strongly proactive,” said Furlanetto.

A number of Italians have been critical of Renzi, of the left-wing Democratic Party, reaching out to former prime minister, right-wing Silvio Berlusconi to form a coalition, but Furlanetto noted: “Silvio Berlusconi is there, he is the head of the second party in Italy, Renzi has to deal with him.”

Renzi has his work cut out for him, she said, as she acknowledged that “it’s hard to take away privileges from those that have them.”

To wit, Santo Versace, chairman of the family-owned company and a former member of parliament, highlighted these difficulties. “There are many people in parliament that can put obstacles on his path, but I am very positive about Renzi. He is a steamroller, and he will proceed with the changes,” said Versace. He also noted that Renzi “has to deal with Berlusconi,” but was hopeful that Renzi will be able to relaunch the economy, as unemployment swells.

“We can save money by putting an end to the dispersion of bribery money, we should endorse anticorruption laws and fight fiscal evasion,” said Versace of the issues he felt were most urgent. The executive remarked on Renzi’s support of Made in Italy. “Many politicians before him did not show any interest in fashion — conversely to the French.”

Backstage after her fall show, Donatella Versace was enthusiastic about Renzi, recounting that the biker jacket Renzi wore to a TV show was Versace and proudly added that the politician wore Versace for his swearing in. Stylistic comments aside, she described Renzi as “intelligent and quick, and he has a modern mentality. If there is one person that can succeed it’s him, I strongly believe in this.”

Pietro Beccari, chairman and ceo of Fendi and a strong supporter of Made in Italy, said he had “big hopes,” noting that high on his list are “the enhancement of the value of Italy and its patrimony,” a simplification of bureaucracy and the return of meritocracy. “His program is concrete,” said Beccari.

Mario Boselli, head of the Italian Chamber of Fashion, didn’t mince words and said Renzi “has the balls — yes, write that down, that’s what’s needed,” he pointed out. “He is determined and brave.” Jane Reeve, ceo of the association, believes “people want changes and youth represents changes. He can makes things happen,” said Reeve, concluding with an appreciation for Renzi’s support of the fashion industry.

Renzo Rosso, founder of Diesel parent OTB, said he hoped Renzi “can do for Italy what he’s done for Florence,” while admitting that “there are a lot of powerful people from different factions in parliament,” and that Renzi will have his job cut out for him in trying to get everyone to be on the same page.

Alessandro Cremonesi, ceo of Jil Sander, said that “at the moment, he is the only effective hope and potential for our country. The majority is the same the previous government had.” He conceded Renzi’s job was “not easy and everyone expects immediate results, but at least he has brought a change of attitude towards the positive.”