NEW YORK — During the recent Republican National Convention and last month’s New York Fashion Week, an intrepid handbag designer and a pack of models took to the streets of Manhattan with a series of guerrilla fashion shows. 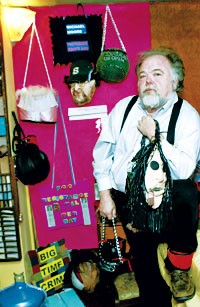 NEW YORK — During the recent Republican National Convention and last month’s New York Fashion Week, an intrepid handbag designer and a pack of models took to the streets of Manhattan with a series of guerrilla fashion shows.

The shows featured bags made to resemble the head of Howard Stern, with his mouth zippered shut and padlocked; a purple heart in honor of Democratic presidential candidate Sen. John Kerry and a ball-and-chain emblazoned with the slogan “Free Martha.”

Behind it all was designer Edwin “Itsi Bitsy” Atkins. Retired from the movie industry — with production-management credits in films ranging from “Highlander” to “The Long Walk Home” — Atkins took a roundabout route to the fashion world.

The grizzled, bearded 57-year-old — whose presence belies his nickname — started working with leather to repair his collection of old and rare books, which ranges from a Latin religious tome dating from 1610 to a signed first edition of Jack Kerouac’s “On the Road.” In late 2001, at a party with friends in his East Side apartment, he started cutting up bras and folding them into the shape of bags.

Putting two incongruous pastimes together, Atkins concluded that the next thing to do was to cover the doubled-over bras in leather and turn them into purses.

He started working on a drawstring closure for the bag he’d designed, with a flapped-over lid.

“After 35 tries, I came up with a design that every time you pulled it, it made a heart,” he said. He christened the purse the “Bristol bag,” using an obscure British slang term for a woman’s breast that, he thought, would sound classier than a “bra bag.”

“I did not want to be known as a sex peddler,” he said.

Having come up with a workable design, he decided he’d make fashion his next project.

“I wanted to take on a whole other creative career,” he said. “I decided to spend the next 20 years doing this.”

Atkins’ apartment is filled with one-off bags intended to comment on public events. The Stern bag refers to the designer’s outrage at the Federal Communications Commission’s decision to fine the radio personality over the use of profanity, while the Martha bag is intended to express his opinion that Stewart was subjected to too harsh a penalty in the Imclone insider-trading case.

Riding around Manhattan on his Segway with the topical bags, Atkins has caught the attention of some TV news crews. CNN ran a piece on his series of “Models Against Bush” performances during the RNC. Atkins said he’s since concluded that he doesn’t want to be too overtly political.

“Then you take your audience and you cut it in half,” he said.

He’s also turned out a few more practical designs. In addition to the Bristol bag, which only subtly evokes bras for those who don’t know the story, Atkins has designed a “cuff bag,” a loop-style purse that can be worn around the arm, leg or neck.

His company is called Red Carpet Handbags and one of his goals is to produce bags tied into movie premieres. So far, he’s sold a small number of bags to a few local retailers, though his business has largely been of the off-and-on variety. He’s hoping to line up some kind of production deal with a larger accessories house, though he acknowledged that he doesn’t really relish the idea of being a cog in a corporate wheel.

His best bet, he said, would be to plow ahead with his own version of topical “It” bags.