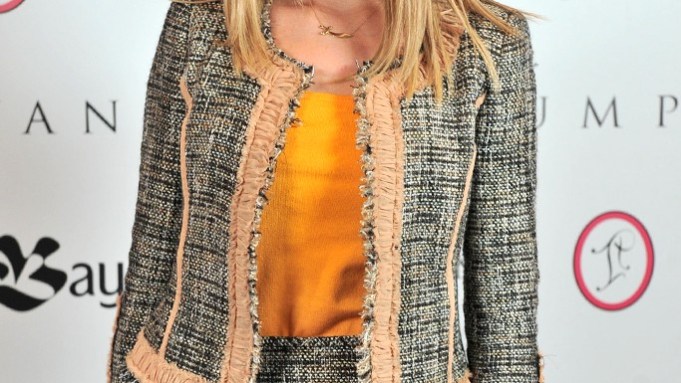 NEW YORK — Ivanka Trump is about to have a fashion baptism.

Trump is staging her first-ever runway show at Lord & Taylor tonight, marking a milestone in her fast-growing fashion business. She launched jewelry four-and-a-half years ago, and footwear and handbags followed in 2010. Outerwear surfaced last year and, this spring, ready-to-wear debuted. Her products sell at 350 department stores including Nordstrom, Bloomingdale’s, Macy’s, The Bay and L&T, and also at scores of independent specialty stores and on Zappos.com.

Trump projects $230 million in retail sales in 2012 for all her fashion products and doesn’t include jewelry, which she considers a separate business with a different distribution, in the figure.

“It’s been very quick growth,” she told WWD. “The sell-throughs have really been incredible in some styles — 34-plus percent.

“I will soon be announcing three new licenses with great partners for a fragrance deal and a sunglass deal” and a third deal she declined to disclose. “That one is a little further down the pike.”

She also has a jewelry boutique on Mercer Street in Manhattan, and additional jewelry boutiques in the works, including one in Beijing later this year, though there’s no urgent call to brick-and-mortar. “I have various people approaching me on retail concepts. For now, we just want to execute on these initial plans and plan for a larger extension into retailing later. I am exploring it. Nothing is imminent. I’m not motivated to grow just for the sake of growing. I want to grow strategically. I hope this business survives for many decades. I believe in quality and sharing my aesthetic.”

Though Trump’s not supplying Lord & Taylor exclusively, the store tops her list of “partners” in her fashion adventure. This month, L&T was the scene of a “Celebrity Apprentice” episode where participants frenetically dressed the Fifth Avenue windows with Trump’s collection on live models. Trump was as diplomatic as could be on TV, but thankfully the windows were reimagined by display professionals and since last week have showcased her spring collection. “How cool is that?” she said. “Being a Trump, I’m a huge fan of New York real estate, and having all the windows at the L&T flagship dedicated to my brand is a real honor.”

HMX Group is licensed to produce Ivanka Trump Ready-to-Wear. She works with the HMX design team, and for tonight’s show, she’s partnering with Frédéric Fekkai and Laura Mercier, on the hair and makeup, respectively. Ultimately, she said, she has “final oversight over everything.”

“For me, it’s very important to find the best partners in everything — people I am comfortable working with and willing to work in a collaborative environment,” Trump said. “The product needs to be consistent and needs to be my aesthetic. The most important thing is execution — keeping the brand sustainable and well positioned. There’s a very specific person I design for — a professional, elegant hardworking young woman, typically 25 to 40.”

Her rtw collection comprises 37 looks, grouped in three color stories — black and orange; tan and fuchsia; navy and white — and by trend — refined equestrian, modern geometric patterns and feminine. “The clothes are really sharp, on target and sophisticated, and really the way the American woman wants to dress today,” said Liz Rodbell, executive vice president for Hudson’s Bay Co., which operates L&T and The Bay in Canada. “There’s an ease to the clothes. They’re not flashy at all.”

Rodbell said L&T has a pop-up shop on the fifth floor bringing all of Trump’s fashion products together in one spot. After the show, Trump will be stationed there, handing out signed sketches with any purchase of her products. Ten percent of the sales will be donated to the United Nations Foundation’s Girl Up campaign, of which Trump is a founding partner.

For a celebrity, socialite and real estate heiress, Trump is down-to-earth on prices. They’re accessible, at $50 to $225 for the range of denim, T-shirts, suits, dresses and separates. “In terms of a lifestyle brand, I don’t think there are a lot of options that [combine] approachable prices, beautiful fabrics and attention to details,” the 30-year-old Trump observed. Other labels similarly priced can be “overly dowdy, or overly trend-conscious. They lack an element of chic. I wanted something elegant, feminine and glamorous.”

As a Trump, she’s subject to plenty of gossip and criticism, which can be fueled by the fashionistas and bloggers reviewing the collection. “That’s always a possibility,” Trump gracefully acknowledged. “But I will say the reception has been so strong and positive from retailers and customers who are very much supporting it through their purchases.”