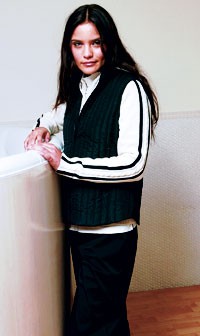 NEW YORK — After nine years as a men’s brand, Izod has quickly fallen in love with the women’s business.

The success of its women’s sportswear and swimwear collections, introduced for spring under a license with Kellwood Co., has caused the brand to accelerate its expansion into other product categories. Movement (activewear) and jeans are being introduced for fall, accessories are planned for holiday, golf apparel hits stores for 2005 and a deal is in the works for intimate apparel. All of these categories are produced by Kellwood, which has licensing deals with Izod’s owner, Phillips Van-Heusen.

“We think the Izod women’s business could be two or three times as big as men’s,” said Kenneth Wyse, president of licensing for PVH. “The name recognition is very strong and Kellwood has done a great job executing this business.”

Company executives have said Izod does about $500 million in total retail sales and licensing revenues, a figure which includes only the men’s products. The new women’s sportswear business, which is sold exclusively at divisions of May Co. until January 2005, is on track to reach more than $50 million this year, according to Suzanne Karkus, president of Izod women’s wear for Kellwood.

Stephen Ruzow, president of all women’s wear at Kellwood, said, “We have already beat our plan in the first three months. We attribute the better-than-expected sales to having the right fashions with the right fit.”

The 60-year-old Izod brand for many years was associated with Lacoste, but the two brands split after PVH acquired Izod from Crystal Brands Inc. in 1995. PVH, which now also owns Calvin Klein, has spent the last nine years building up the Izod name in men’s, both in-house and through a number of licenses. The company inked a deal with Kellwood in 2002 to develop women’s sportswear in the moderate channel.

The decision to extend the sportswear offerings into denim and active is a result of the early reaction to the initial line of merchandise, said Karkus. “We had planned to roll out denim and activewear divisions sometime, but we are doing it sooner than we initially had thought based on a better-than-expected launch of sportswear,” she said. “We are a true lifestyle collection in the moderate area that is driven by fashion items, and customers have responded to that.”

In the moderate channel, the brand competes with labels such as Caribbean Joe and ie, May’s private label collection, Ruzow said.

Izod Movement, as the new active-inspired division is called, includes quilted jackets and vests, drawstring pants, tank tops and hooded sweatshirts made of materials including terry cloth, nylon and polyester.

“Izod has a sport heritage so people think of us as a sport-related brand,” said Karkus, who nonetheless said the line was not designed for performance as much as for women who want to look sporty. Wholesale prices range from about $11 to $34.

The denim offerings, meanwhile, include peacoats and a variety of jeans such as cuff styles, frayed looks and both light and dark washes, said Karkus, who was formerly an executive at Calvin Klein Jeans. Denim prices retail for about $11 to $25. Prices for the core sportswear line wholesale for between $7.50 and $34, with an average price of about $37.

Both these divisions will have their own hangtags as Izod Movement and Izod Jeans, Karkus noted. Initially, the denim and active pieces will be merchandised along with the core sportswear, but she said the company envisions a time when they will be sold in other areas.

Karkus said Izod has seen strong sales of smaller sizes, and “the results of our launch show us that the customer is definitely a little younger than we thought.” Now, the company is addressing its more fashion-forward shoppers by advertising in publications such as In Style and Lucky, she noted. The target age for the Izod customer is 30 to 45.

The new accessories line, meanwhile, is being produced by Kellwood’s New Campaign division, which also makes accessories for some divisions of Ralph Lauren. The Izod collection includes handbags, hats, belts and personal accessories such as small leather goods and scarves, and will debut at May market in time for holiday selling, said a company spokeswoman.