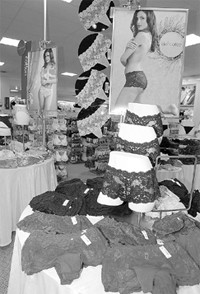 The retailer expects to produce higher sales and profits per square foot than its average at a smaller, freestanding store prototype unveiled Monday in this south Dallas suburb.

It’s part of an experiment to explore new avenues of growth outside of malls, since the rate of mall development has slowed drastically. Penney’s also will open two similar units this month in Plainfield, Ind., and Coon Rapids, Minn., and a similar store next spring in a former Kmart in Maple Grove, Minn.

“Productivity here will be higher — I guarantee it,” said store manager Bob White as he led reporters on a tour. “These are primed to grow our business and have increased sales per square foot. With its centralized layout, it’s designed to be functional and productive.”

Penney’s records an average of $132 a square foot in its mall stores, but White declined to specify what the increase at the new stores might be.

Situated across the parking lot from a strip center housing Ultimate Electronics and several restaurants, the store packs all of Penney’s classifications except furniture into a concisely arranged single level. It has 77,000 square feet of selling space — about 28 percent less than a Penney’s mall store. So, merchandise assortments throughout the store are narrow and deep with a strong focus on key items. The overall appearance is of a gleaming new Penney’s with easy-to-shop wide aisles and tightly edited assortments.

“We will have all brands, all labels and all styles that are marketed for stores in the [Dallas-Fort Worth] Metroplex,” White pointed out. “We want to be in stock in size and colors for the businesses we choose to be in.”

“Customers have told us they like to shop a little early or late,” White noted. “We’re not subject to the constraints of mall hours.”

New features include grocery-style checkout lanes with six registers — two each in three rows — at the main entrance, where shoppers can pick up compact black shopping carts.

Five additional cash wraps are scattered in service-intensive departments, such as intimate apparel and fine jewelry. A service center at the rear of the store handles all returns to minimize disruption and delays at other registers.

Fitting rooms hug the L-shapes along the building’s corners to maximize dead space that Penney’s has found customers don’t like to shop. In the children’s department, dressing rooms sport a colorful new decor in purple, russet and gold. The portrait studio is one of only 17 all-digital setups within the chain. The store also has a family restroom, which is rarely found in older units.

Penney’s has been working to upgrade lighting throughout the chain, and this new store is one of its brightest due to high candlepower florescent lights plus spotlights focused on key-item displays.

Housewares occupies about 4,000 square feet in the store and has been identified as a “key category” that Penney’s has been intensifying for two years.

“We’re moving back into it because customers have told us they want it,” White said. “The whole home business for the company has been very, very good.”

The store had a surprising amount of shoppers — mostly mature women — cruising the aisles before 9 a.m. on opening day. Christina Wickline was one of the early birds, picking up Arizona jeans for herself, some children’s clothing and curtains.

“I like it,” she said. “It’s out here, and before we had to drive to the Parks at Arlington [mall]. It’s a really nice store with a lot of selection, and they sent me a card for $10 off. I’ll be back.”