NFL player and actor Roosevelt “Rosey” Grier’s “Take a Giant Step” benefit at the Dorothy Chandler Pavilion in March of 1977 was no ordinary charity event. 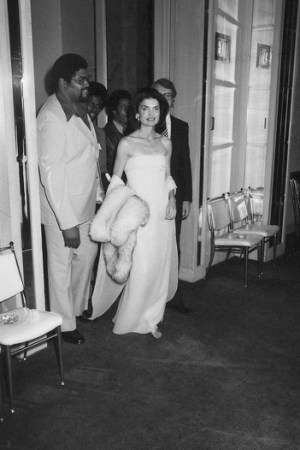 NFL player and actor Roosevelt “Rosey” Grier’s “Take a Giant Step” benefit at the Dorothy Chandler Pavilion in March of 1977 was no ordinary charity event. During a performance by Ray Charles, a crazed fan leapt on stage and “attacked” the singer. Though Charles later said he had merely been hugged by his admirer, guests were visibly shaken. “It struck very close to home,” Maureen Dean, wife of presidential counsel John Dean, told WWD’s reporter. At the time, her husband was waist deep in legal troubles over the Watergate scandal. “All of us in the limelight are vulnerable,” she added.

And Charles’ assailant wasn’t the only person in the room with a penchant for jumping out at people. Pioneer paparazzo Ron Galella was also in attendance. The previous year, the Secret Service had arrested him for leaping in front of John Kennedy, Jr. in Central Park to get one of his infamous candid shots. Galella’s name was then catapulted to fame in a very public trial that resulted in an injunction mandating that he maintain a 25-yard distance from the Kennedy clan. Easy to do when walking down the street, but not so easy at a party. Grier’s star guest at the benefit happened to be none other than Jackie O herself. But the photographer managed to keep the legally prescribed distance. “I have a tape measure,” he quipped.