Jacobs to Design Looks for Ballet

After his signature collection in New York in September and Louis Vuitton in October, Marc Jacobs will have yet another fashion showing in November. 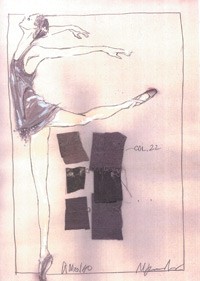 PARIS — After his signature collection in New York in September and Louis Vuitton in October, Marc Jacobs will have yet another fashion showing in November — at the Opéra Garnier, no less.

Choreographer Benjamin Millepied, a principal dancer with the New York City Ballet, has asked Jacobs to design costumes for “Amoveo,” slated to premiere Nov. 10 for an eight-performance run.

“I do love the ballet,” the designer said Thursday. “It’s such an honor to be asked.”

His first batch of sketches is already in the hands of the French opera company’s atelier, and toiles — or first samples — are being readied. Jacobs is designing 42 costumes, defined by metallic colors, tunics and T-shirts.

If that sounds a bit abstract, it should. Millepied asked the designer to contemplate the ballet’s music — excerpts from Philip Glass’ lushly repetitive “Einstein on the Beach” — and gave him few details about the narrative or dance elements.

“It’s not like doing the ‘The Nutcracker,'” Jacobs quipped. “I just listened to the music continuously and came up with an idea.”

Luminous minerals and crystals were Jacobs’ jumping-off point, and — having been told to consider unisex styling — he came up with the tunic shapes. Using varied metallic shades and fabrics that range from glossy lamés to more earthy fabrics, the designer plans to make each costume slightly different.

Jacobs has designed for the stage before, albeit on a smaller scale. In 1993, he dressed Liv Lubovitch’s troupe for a Design Industries Foundation for AIDS benefit uniting dance and fashion.

Jacobs noted that the Paris ballet costumes would not influence his spring 2007 collections; however, he acknowledged that ideas filter freely among his various projects. To wit: Glass’ music was featured at the Marc Jacobs show in New York in February.