In a new marriage with PureBeauty, things for Jamal Hammadi are about to change. 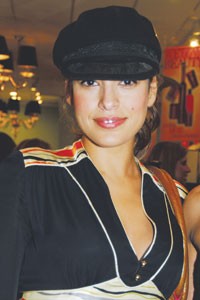 LOS ANGELES — He regularly styles the hair of Linda Evangelista and Heather Graham and has a capsule collection of hair care products that have so far been available in about 70 stores around the country. But in a new marriage with PureBeauty, things for Jamal Hammadi are about to change.

Under the terms of the deal, PureBeauty, based in Encino, Calif., will carry the hairstylist’s two-year-old Hamadi line (why he dropped one “m” from the name is a mystery) in its 63 stores nationwide, essentially doubling his doors almost overnight.

“From a business standpoint, the exposure and the opportunity is wonderful,” said Hammadi. “It’s a perfect example of two companies coming together and creating something modern and fun.”

“It’s a very personal night for me,” said Hammadi, whose mother also stopped by. “There’s no reason these celebrities should come to shop, but they came to support me. There’s so much love in Hollywood.”

Jim Petty, president and chief executive officer of PureBeauty, is confident that the Hamadi collection will be a perfect complement to the retail chain’s other upscale lines, which include Philip B and Ojon for hair, Paula Dorf in cosmetics and Bliss and Fresh in the bath category.

The party also was held to officially showcase the outlet’s revamped look — complete with pale teal walls and a cozy salon tucked away in back — that Petty plans to roll out to the chain’s other outlets.

“We’re reinventing the business,” said Petty, adding that PureBeauty used to be a beauty supply name. “We want aspirational brands that are attainable.” The Hamadi collection was just that, he said. “The line made sense to us because it has a great following and appeals to higher-end buyers. We want to take a great product and make it available to a large demographic.”

Hammadi held court at a display station, encouraging guests to test the newest item in the line, a shea butter spray for color-treated hair that contains kelp and essential oils of ylang-ylang and clary sage. The spray retails for $18. And a new lip balm, scheduled to launch this month, will be his first nonhair product. “I’m hoping to turn this into a lifestyle brand,” he said.