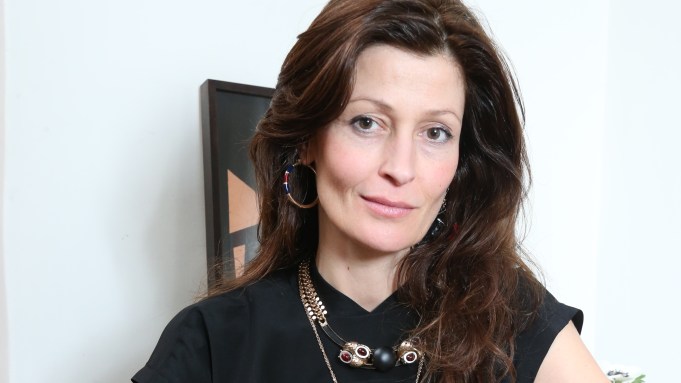 NEW YORK – Jane Mayle is back. Eight years after the designer decided to close Mayle, leaving a devoted tribe of customers clinging to their beloved romantic, magpie pieces from her label, she’s reviving the collection.

“It’s been a little updated and tweaked, but the DNA of the brand hasn’t changed at all,” said Mayle, during an interview last week in her Greenwich Village apartment, where she’ll show the fall collection to editors today. They should expect a low-key presentation — it’s a fifth-floor walk-up — per the personal, anti-spectacle philosophy Mayle has held since she launched with a small shop on Elizabeth Street in 1998. In fact, anyone acquainted with the line will have a familiar feeling when they see the clothes: Mayle is picking up where she left off, for the most part working from her archive. She had saved everything she ever designed. “Manhattan Mini Storage loves me,” she said.

“This is quintessential Mayle dress using the classic Spanish lace that we always used,” she said, holding up a black dress with white lace as accents. The lace is also used on lingerie-like slipdresses and rompers. There’s a thick black leather A-line skirt with big buttons and a washed, high-neck blouse. A long black lace dress with covered buttons was from a 2010 pop-up shop Mayle did. Now she designed a cape to go over it.

It’s not a reinvention, but a refresh. The tags in the samples bear Mayle’s original cameo logo, which is being removed in the redesign for sales. The cameo will transfer to hardware, such as brass buttons on a coat, and the medallions on bracelets and belts — part of the new costume jewelry range she’s designing as part of the collection. “I had never done jewelry before, but people always imagined that I had for some reason,” she said. “It was a natural progression.”

Buyers have already seen the collection. In fact, Barneys New York saw a small pre-fall range Mayle put together in June and tried to place an order. “We basically had to say, ‘That’s lovely of you, but we don’t have the infrastructures. We don’t have a production manager or anything,’” said Mayle.

By her account, the decision to return to fashion after a voluntary eight-year hiatus was “this nice day-dreamy whirlpool.” The catalyst for her decision to close shop in 2008 was the expiration of her store’s lease. She wasn’t feeling the neighborhood anymore, or where the industry was headed — the constant demand for bigger collections, more deliveries. She was satisfied with the size of her small-yet-stable business — $5 million, 60 wholesale accounts — but the independent operation would have had to take on outside investment to keep up.

“I realized that I could change the way I lived and take a step back,” said Mayle. “That was my prerogative to do so. I wanted to go out at a moment when I had been dealing with my suppliers, my accounts, all of my vendors in a way that was maximum respect. Also, what I was giving the customer was something that still had the value I wanted in it. I knew that wasn’t going to last much longer. I was running on fumes, definitely.”

She checked out ahead of the financial crisis, but immediately became ill with an auto-immune disease. “Still no one has been able to diagnose it,” said Mayle. “I had it for two-and-a-half years — steroids, in and out of hospitals, shut down one side of my face, I couldn’t open my jaw. It’s over now. But the thing is when I had the business, I didn’t take a day off and you pay for that, I really think.”

She got it under control, traveled for a few years, absorbed culture, enjoyed life, resurfacing professionally here and there, with pop-up shops and consulting for Club Monaco. And then she began to miss having her own thing.

She thought about trying to re-create the feeling of her original store online, even though she had never been an e-commerce shopper. She mentions meeting with Federico Marchetti of Yoox Net-a-porter Group. But it was Nordstrom’s Olivia Kim, formerly of Opening Ceremony where Mayle had a Los Angeles shop-in-shop, who encouraged her to get back into the business and put her in touch with her now business partner, Rebecca Blair, a consultant whose clients have included Gabriela Hearst and Rainbowwave Showroom. “I would definitely say she lit a fire under me,” said Mayle of Blair.

Mayle was tired of the relentless pace of fashion in 2008, a time that seems quaint by today’s standards when the industry has accelerated to the point where the wheels are actually coming off the metaphorical bus. How was she planning to cope? (Side note of sorts: Mayle is also eight months’ pregnant with her first child.)

“What I had said to Rebecca was, I’m willing to explore this if my retailers were interested [they were] and I don’t want to do 75 to 80 pieces every season of clothing,” said Mayle.

The collection she’s showing today is a mixture of pre-fall and fall. There will be no more than 25 to 35 pieces a season, with four deliveries a year, and many of the silhouettes will repeat, maybe not season on season, but from spring to spring, fall to fall, etc. Working from the archive makes things easier. “The re-editions are at least 80 to 90 percent ready,” she said.

Mayle also intends to open a New York store again as soon as she finds the right place. “That’s how I started, so that’s in my blood and how I related to my customer,” she said. “But at the same time that can wait a little bit because I’m interested to see what it’s like to relaunch a business now, without having to be the person who’s also the shopkeeper. It just introduces you differently to the people who have never heard of the brand.”

Those who know it are interested. Barneys has the domestic department store exclusive to start. Smaller retailers that have committed to the line are Capitol in North Carolina, Barneys Japan and Montaigne Market. The machine is already churning, but Mayle said she’s prepared to do it on her terms. She said that’s why she disclosed her past illness.

“That really steels your reserve to say, ‘OK, you have to really watch when things get out of balance,'” said Mayle. “And now that I’ve had a taste of life outside of that circus, it’s really important to me to keep that gentleness and going slow.”