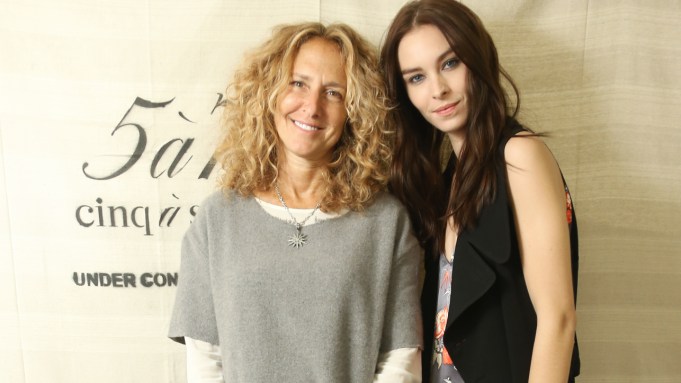 Cinq à Sept is a new contender in the advanced contemporary market. The brand’s mysterious, anonymous name — which is pronounced sank-ah-set and translates literally to “five to seven,” the French version of happy hour — belies the well-known industry veteran behind the venture: Jane Siskin.

“It’s inspired by that perfect time when day turns to night,” Siskin said of Cinq à Sept’s aesthetic. “The name felt alluring and had a little bit of mystery.”

Siskin, chief executive officer of the Los Angeles-based Jaya Apparel Group, is confident she’ll be third time lucky with Cinq à Sept’s debut this summer. Which is not to say that the two brands in which she was formerly a key partner — Seven for All Mankind and Elizabeth and James — were in any way lacking in luck or success. Quite the contrary.

But during a preview of Cinq à Sept’s first official pre-fall collection in New York, Siskin said her latest brand feels the most authentically her. The collection is designed by the in-house team she oversees at Jaya Apparel Group — the same team that launched Elizabeth and James in 2007 and oversaw it until the brand’s licensee contract came to an end earlier this year.

“When our contract with Elizabeth and James was up, there was never a question that we weren’t just going to keep doing what we do,” Siskin said of Cinq à Sept, which has been in the works for about six months.

If not the contemporary customer herself, Siskin, in her two-plus decades heading Jaya Apparel Group — formerly L’Koral Inc. — has accumulated in-depth knowledge of the fast-moving market. “We were enjoying really good business in this [contemporary] zone and we feel like we have a strong relationship with the consumer,” she said. “We really think we get the girl. We understand what she wants and when she wants it, which is half the battle in this business.”

Siskin routinely travels between Los Angeles and New York, where Cinq à Sept is headquartered at Jaya’s Manhattan offices. The company also manufactures various Disney and Dreamworks licenses and other private contemporary labels, though she predicted that her latest collection will be the group’s “crown jewel.”

Equal parts feminine and cool, the line is built around the idea of dressed-up clothes for special moments. Though it contains a few sportswear items, most of the looks — many of them embellished with colorful floral embroidery, delicate prints and girlish details like pleating and ruffles — invoke a sense of occasion. Off-the-shoulder silhouettes and floral-printed suiting with cropped flares riff on current trends that haven’t hit a saturation point yet.

“Three to five years ago, [occasion dressing] was really about parties, bridal showers and date nights,” Siskin said. “Now it’s really expanded into all the moments of your everyday life. With social media being such an important piece of everybody’s life right now, it’s this idea of being Instagram-ready — ready for any moment. That is really what we’re embracing.”

In addition to social media’s effects on shopping habits, Siskin has taken note of some other changes in the contemporary market’s terrain since launching Elizabeth and James eight years ago. For one, customers now encompass a wide range of ages, from girls graduating high school up to women in their 60s. And the pendulum tends to swing far, with brands skewing either extremely trend-driven or basic and minimalist. Siskin aims for the sweet spot in the middle.

“Everybody’s gotten a little serious,” she said, holding up an off-the-shoulder drop-waist dress in cascading layers of burgundy and coral silk chiffon. “Not everybody wants to wear black all the time. We like to add some frivolity. Everything we do really needs to pass the pretty litmus test: there should always be something pretty and sexy about everything that we ask a girl to buy.”

Cinq à Sept’s debut collection has already been picked up by more than 100 specialty and department stores, including Intermix, Neiman Marcus and Nordstrom, where it is slated to arrive with pre-fall deliveries at the end of June. Priced up to $1,995 for fox- and rabbit fur-accented pieces, the core of the collection sits between $245 and $495.

“Jane has always had a keen sense of the market, the customer and the need for fashion that speaks emotionally to today’s fashion enthusiast,” said Ken Downing, senior vice president and fashion director at Neiman Marcus, who described the line as “adorned with a sweet-meets-street sensibility” and “on trend with the eclectic, eccentric romanticism of the moment.”

Saks Fifth Avenue plans to stock Cinq à Sept for the season as well. “It is rare that a collection launches with such a strong foundation,” said Roopal Patel, the retailer’s fashion director. “Jane’s seasoned eye and business savvy shows….She knows what her woman is looking for. Cinq à Sept has a dreamy and romantic spirit with a modern boho twist to it.”

Within a year, Siskin hopes to open two flagships for Cinq à Sept — and only two, in order to keep them special — as well as e-commerce. “I want to build a big brand,” she said. “I’ve done it a couple times already, and I want to do it for myself.”