Japan Fashion Week showcased just about every runway antic imaginable — from bunny masks to models in coffins and even drag queens in bouffant hairdos.

By Amanda Kaiser and Koji Hirano on March 24, 2008
View Slideshow 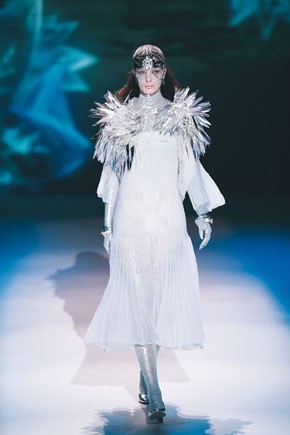 TOKYO — Japan Fashion Week showcased just about every runway antic imaginable — from bunny masks to models in coffins and even drag queens in bouffant hairdos. But thankfully the fall shows also offered some wearable and original clothes, particularly those featuring fine tailoring, innovative fabrics and fresh takes on Asian themes.

The sixth edition of JFW, which wrapped up March 15, attracted 19,100 visitors, 1,000 more than last season. Organizers are eager to boost the international profile of the event, but it remains a predominantly Japanese affair. Although there were 201 journalists from foreign magazines and news organizations, only 41 foreign buyers came to JFW, held at the Tokyo Midtown mall and surrounding areas.

Nobuyuki Ota, president of Issey Miyake Inc. and chief of JFW’s collection project committee, said he was pleased many young designers chose government-subsidized JFW to present their collections. But he acknowledged that organizers must strive to attract buyers and editors from outside Japan through advertising and promotional activities.

“From the viewpoint of globalization, I am not satisfied yet with the number of foreign visitors and we have to work harder to get more and more in the future,” Ota said. “JFW has just begun and we need a couple more seasons to promote the event internationally.”

Young designers here are facing increasingly difficult conditions, both in their core home market of Japan and abroad. Consumer spending in Japan continues to stagnate and the global macroeconomic outlook seems to worsen by the day. Meanwhile, the allure of foreign brands dominates the luxury market for apparel and accessories in Japan.

Ota said Japan’s emerging brands can actually benefit from the current climate and entice shoppers who are bored with seeing the same luxury brands and merchandise in every store.

“Whenever the market needs change, there’s the chance for the designers of the next generation,” Ota said.

Tamae Hirokawa, who founded her label Somarta in 2006, put together one of the week’s most directional and cohesive collections, showcasing textured knits, fuzzy legwarmers, delicate white gowns and shimmery henna tattoo-inspired bodysuits that covered every inch of the models — even their fingers. Crystal shards and chain-mail rounded out her vision of an imaginary tribe of people who live in “a very cold country.”

Unlike many of her design peers, Hirokawa has signed some high-profile retail accounts, including specialty store Restir, which carries mostly European luxury brands such as Dolce & Gabbana, Fendi, Giambattista Valli and Miu Miu. She noted a shift as some retailers are embracing Japanese brands.

“I believe I have started a kind of revolution in the market,” she said.

Other highlights of the week included so-called mintdesigns, which staged a show in its signature quirky style. There were some great prints, like a dainty gray floral screened onto an orange-and-white-checked background and bold yellow stripes. That said, the materials were often worked into oversize proportions that looked tricky in terms of wearability. The clumps of shredded paper resting on the models’ heads and spilling out of some of the garments added to the show’s theatrical but fun vibe.

In terms of gimmicks, there were plenty. The Né-Net show featured models in bunny masks and plenty of dry ice, giving the proceedings a creepy “Eyes Wide Shut”-meets-Harajuku design sensibility.

The oddities didn’t stop there. A few days later, drag queens in animal prints and hot pink strutted the runway for what has to be one of the most eccentrically named fashion brands around: Gut’s Dynamite Cabarets. During the show, a male model gazed lovingly at the head of a fox stole as the sound system blasted Kenny Rogers’ “Endless Love.”

But it was left to a foreign designer — Jill Stuart — to wrap up JFW, reshowing her fall collection for an eager local audience. After the show, throngs of young women and girls clamored for the designer to autograph the hand mirrors they received as souvenirs. “I love the Japanese customers and people. Tokyo is my home,” Stuart joked.

That enthusiasm aside, there are signs JFW and others in the fashion industry need to streamline and coordinate the show schedule. About 30 brands, including noteworthy newcomers like mercibeaucoup and Anrealage, have opted not to participate in JFW and instead stage their own shows and presentations, some running as late as early April.

In addition, JFW’s ever-changing roster of design talent and disparate trends strained some retailers’ overall impressions of the shows in Tokyo.

“Some of the newcomers of last season have already gone and it is difficult to evaluate the newcomers of this season in that sense,” said Takatomo Ogawa, a buyer at Narastore. “But I decided to buy Mikio Sakabe, who had a great show among young designers.”

Sadahito Shigeno, manager of the Restir boutique in Tokyo Midtown, is still completing the store’s budget through showroom visits, but left JFW with a lukewarm feeling.

“The Made in Japan quality was high, but it was difficult to find collections that fully satisfy us,” Shigeno said. “Tokyo style is different from the real clothes coming out of New York and the avant-garde things from London. It does not always fit the taste of our shops.”