It is still unclear how much buyer feedback will actually translate into sales.

By Amanda Kaiser and Kelly Wetherille on October 22, 2013
View Slideshow 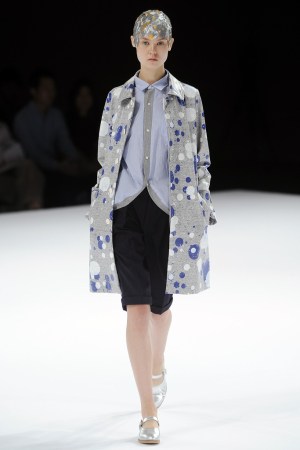 But it’s still unclear how much that feedback will actually translate into sales. Japan is planning to increase its sales tax to 8 percent from 5 percent in April and some Japanese retailers are expressing a certain level of caution about how much that added cost might deter shoppers. Meanwhile, foreign buyers here said they are being selective when it comes to placing orders.

Miyako Sekimoto, fashion director for Matsuya, said her store is keeping its current spring 2014 budget for Japanese brands in line with this year to be sure it doesn’t wind up with unsold stock.

“We are a little worried so we decided to keep the same budget,” she said, adding that it’s easier for Japanese retailers to buy Japanese brands’ stock at the last minute rather than import foreign brands from abroad. So Matsuya might wait as late as March or April to gauge the situation before possibly placing more orders with local labels.

Tokyo Fashion Week, sponsored by Mercedes-Benz, has never been a major stop on the fashion calendar for international buyers, but JFW organizers said foreign retailer registrations rose to 192 this season, up from 168 registrations in March and 153 in October 2012. A JFW spokeswoman stressed that some buyers choose not to register, so the true number of retailers coming to Tokyo is higher than the official figures.

Of the 192 registered international buyers from this season, 52 of them were representing stores in China. Another 28 represented American retailers and 26 did so for stores in Hong Kong. These were the top three markets.

“Basically, I’m always looking for clothes with a kind of value — something that you can’t find anywhere else. So in that sense, the most enjoyable one this time was Anrealage, and after that was a brand called Lamarck. It’s in its second or third year and until now, I haven’t really noticed it, but this time it was very clean…as a collection I thought it was very tight,” he said.

Saito expressed a certain level of frustration about Tokyo’s packed schedule in which on-calendar and off-calendar events overlapped with one another.

“I wasn’t able to see some of the ones I wanted to see. So I think [organizers] need to do something about that,” he said.

Matsuya’s Sekimoto said she thought the quality of the Tokyo collections was “much, much better than last season.” She said she was happy to see brands like Somarta and Mint Designs put out clothing with a unique point of view but still in keeping with broader international fashion trends — like this season’s move away from spare minimalism toward prints and ornamentation.

“I think they felt those kind of big changes [within fashion],” Sekimoto said.

In keeping with past seasons, the Japan External Trade Organization flew several retailers to Tokyo for fashion week. Reactions from this group of buyers was mixed.

Ksenia Mamontova, owner of multibrand store Leform in Moscow, said she came to find “something new” for her store. She was pleased with what she found at brands like Helmaph & Roditus, Suzuki Takayuki and Arts & Science, but other designers’ offerings fell short in terms of the quality her luxury customers expect.

“[These Japanese brands] are not for our shop. It’s not our level. It’s like streetwear,” she said.

Faris Al Shehri, managing director of Saudi Arabian retail group Art of Kôhl, and Layla Al Shehri, buying director for the company’s Maison Bo-M store, made the trip to Tokyo to check out up-and-coming labels for pop-up shops and special exhibitions at their stores.

“We wanted to explore the brands that didn’t have the chance [to show in Paris or another international capital] and now we’re quite happy with the result that we see,” Faris Al Shehri said, adding that the retailer had placed orders for about 10 brands including Avie and Yeah Right.

While Japanese brands tend to limit their size range to the smaller end of the spectrum, which can be tricky for foreign buyers, the Al Shehris said they were pleased to find ways to work around that issue.

“Especially the length [is important] for our market. We want everything longer so the Japanese designers are quite flexible and they understand that,” said Layla Al Shehri.

Darlyn Sophonpanich Yangpichit, chief executive officer of multibrand store Darlyny in Bangkok, said she liked the character and quality of the brands she saw in Tokyo, like Undecorated Man and hat line Ca4la (pronounced Cashira, playing off the Japanese word for the number four) but she is going to need to think carefully before placing orders.

“I like the designers, but some styles don’t mesh with our customers,” she said, describing her store’s style as casual and relaxed. “We have to select and mix and match.”