WWD went backstage to talk with the brand's creative director about the new spring line. 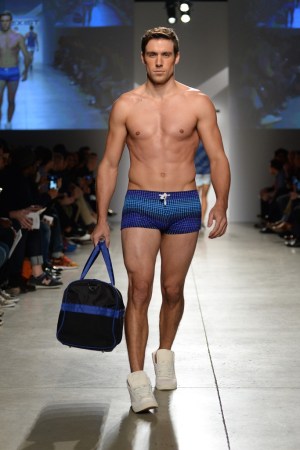 Even though 2(x)ist has built its reputation on underwear, Scarlatti said the company is transitioning into a full lifestyle brand. This season, for instance, the New York-based label launched bags, with backpacks, totes and gym bags.

“It’s about evolving the brand as a teaser,” he said. “We’re dipping our toes into getting more into a lifestyle. We introduced swimwear but now we’ve been learning a lot from our new activewear line. The business is growing but the core is still, of course, underwear.”

There was a lot of that.

The annual show, held at Skylight Modern in Manhattan’s Chelsea neighborhood, showcased many confident male models in barely-there underwear that hugged their every inch.

“There’s only so much I can do to make it different each year,” Scarlatti admitted. “Right now we’re introducing quick-wicking fabrics and performance fabrics as well — anything our guy wants.”

And who is this 2(x)ist man, daring enough to walk in front of strangers in nothing but skimpy undergarments?

“He’s someone who knows who he is,” said Scarlatti. “He’s not afraid to be original or daring. He’s interested in taking a risk.” Apparently so.