Parsons The New School for Design staged a student fashion show in its new futuristic University Center, raising $1.2 million for scholarships in the process.

By Rosemary Feitelberg and Marc Karimzadeh on May 23, 2014
View Slideshow 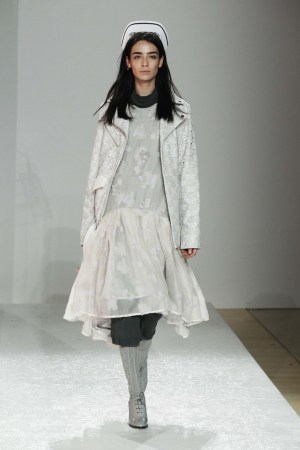 If that weren’t enough to leave dean of the school of fashion Simon Collins grinning and snapping selfies with numerous guests, Hugo Boss’ Gerd von Podewils revealed the company’s $250,000 gift for scholarships.

After receiving his award, Wu said, “This really means a full circle for me. I came to New York 12 years ago to come to Parsons. I only applied to one school. My mom wanted me to apply to other schools but I said no. To stand here in this new building some 12 years later being honored onstage is kind of amazing. I kind of can’t believe it myself.”

Having told students earlier that now is a very exciting time to be in New York, Wu said, “New York is kind of the youngster in the scheme of fashion, especially when you speak of the four major fashion cities — New York, London, Milan and Paris. New York has come a long way. It’s a really great moment. I think people look at New York not only as a really great fashion city for business but also for creativity and talent — new talent.”

While greeting a crowd that included Anna Sui, Chris Benz, Tracy Reese, Vince Camuto, Natalie Joos, Genevieve Jones and Yeohlee Teng, among others, Donna Karan also stopped to talk about the next generation of designers. Active in the school’s graduate program, she said she was “blown away” by the students’ level of quality, creativity and point of view. “I am so proud of what the school has become. I mean the clothes are superb,” Karan said. “It’s beyond the high tech. The level of artistry, creativity and of going to a new place. When we were designing, you were held. Now I feel as though they got opened up and said, ‘Let me live.’”

Earlier in the day, the graduating designers had a dress rehearsal with the Parsons B.F.A. Fashion show. The runway presentation showcased selections from the designers’ collections, demonstrating the diverse sartorial aesthetics the school churns out each year — from children’s wear with a street vibe to romantic tailored looks, as well as colorfully cut oversize furs by Mijia Zhang. The run-through came replete with several speakers, including Milk Studios cofounder and creative director Mazdack Rassi, who reminded the crowd that New York City is “the greatest mentor you can have. The streets we walk in.…We walk in footsteps of giants, like Warhol and Basquiat and Calvin.” His advice to the students: “Make sure you have a point of view. Always define yourself before others define you.”

Benz recalled his journey from Seattle to Parsons, which started when Karan came to his hometown to stage a fashion show. Benz approached the designer. “I said, ‘Donna, I really want to work in fashion, where do you think I should go to school?’ And she said, ‘Obviously, you can only go to Parsons.’” When he visited New York with his mother, the school looked considerably different from its shiny new digs.

“I am just going to say it — it was kind of a dump,” Benz recalled. “Raw classrooms, people were crying, there was smoking in the staircase. I was hoping my mom wasn’t going to pay attention to this.” To make matters worse, the two got stuck in the freight elevator. “She burst into tears and said, ‘Are you sure that’s the school you want to go to?’”

Things have advanced considerably. Parsons executive dean Joel Towers unveiled a research partnership with Ford Motor Co. involving a new design lab at the school. One of its first projects will focus on the Ford Mustang. “Our work…will be to challenge assumptions, to innovate and explore material opportunities to draw on the iconic and the new,” Towers said. “We will bring fashion, technology and Mustang together to do what we do here so well.”