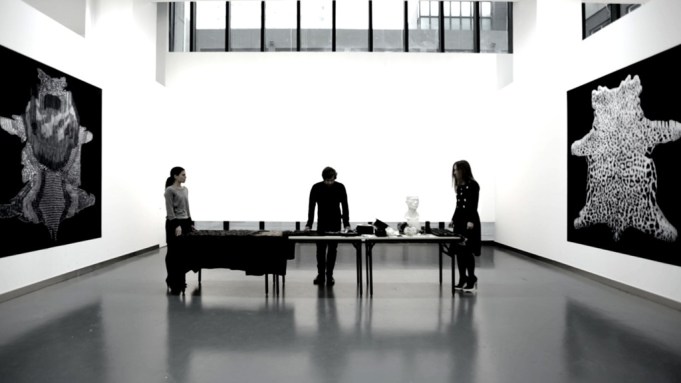 Riss is currently in China to start work on his resort collection. Last December, the Belgian designer opened an atelier in Beijing for his embroidery design and artwork through a partnership with the Beijing Institute of Fashion Technology. Located at the university, the 12,700-square-foot space functions as an incubator of sorts, open to students who can observe and learn from local artisans.

Riss’ atelier employs about 40 artisans, the majority of whom come from Hebei province in northern China.

“In their village you have four generations of women who learn embroidery from when they are born,” he said during a stopover in Hong Kong on his way to Beijing. “It’s amazing.”

By fusing age-old traditions with contemporary design, Riss is set on overturning peoples’ preconceptions about China. “When you think of Made in China, people think it’s cheap. But they have [a history of] so much amazing craftsmanship,” he said.

Since he established the space, the designer, who has a private salon on Madison Avenue in New York and an atelier in Paris, has been spending an increasing amount of time in the Chinese capital.

Unlike the embroidery he encountered in India, which used stone embellishments, he said he was drawn to hand embroidery practices in China. “If you have two people working on the same piece, you can see a difference,” the designer said, explaining the local custom of having one individual complete each piece in its entirety.

Known for his sleek cocktail dresses and intricate floor-length gowns, Riss began his career in embroidery and jewelry design. To breathe new life into the hand-embroidery process, Riss is experimenting with new technology at his Beijing atelier. “When you think of an atelier in China you don’t expect to see what I did,” he said. “We are developing 3-D software to make it high-tech.”

Venturing outside the boundaries of fashion, Riss is using the atelier to create a series of hand-embroidered artworks titled “Animal Armours.” Shaped like different animals, they are fabrics embedded with various stones.

The series has been providing inspiration for his designs for Jay Ahr. “The last pre-fall collection was 100 percent related to one of the pieces we did [for ‘Animal Armours’],” said Riss. “It’s really art coming to fashion.”

Resembling a jaguar skin, the artwork was composed of about  7.5 miles worth of embroidered metal chain. Taking inspiration from this piece, his pre-fall collection featured chain-embroidered jacquard items.

The atelier will also develop embroidery for Riss’ special capsule collection for Tod’s. He started designing D-Bags and Gommino loafers for the Italian company in 2009.

While the embroidery is done in Beijing, Jay Ahr’s production remains in France and Italy.

In Asia, Jay Ahr is only available at Joyce and Net-a-porter, but Riss said that the brand’s Asian following is gaining momentum.