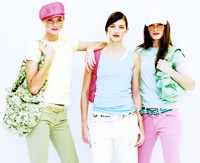 As the brand approaches its 35th anniversary next year, Gap, a label most Americans would associate with affordable basics, is preparing to embark on a major fashion makeover for spring with a new head designer — the first in the company’s history to be introduced to the world. Pina Ferlisi, who has worked closely with Marc Jacobs, Tommy Hilfiger and Elie Tahari at various points in her career, joined the company in March with the mission of updating its item-driven approach (think cords, leather jackets and multistripe scarves) to that of a lifestyle collection with its own point of view.

For Gap’s spring collection, which starts appearing in stores in February, Ferlisi has conceived a brighter, sweeter vision of the way fashion trends can be delivered by a global company with $14.5 billion in revenues through its three major brands: Gap, Banana Republic and Old Navy. For the season, rather than pushing a hot item or fabric, Gap is promoting a “Fresh Crop,” referring to a collection full of cropped jeans, cropped pants, cropped sweaters and cropped jeans jackets, all playing right into the Fifties romantic and feminine mood of the spring runway collections.

In Gap’s space on Sixth Avenue in Chelsea, the line is installed in a brightly lit room, much as it would look in a store, with the more active, performance-oriented men’s collection on one side and the bright women’s sportswear on the other. With stacks of shrunken sweaters and baby polos and big accessories displays, it’s clear that the Gap palette has moved far beyond the natural shades of khaki and denim.

While she isn’t a well-known designer, Ferlisi, who was named senior vice president of Gap, adult product development and design, in March, has been working just under the fashion radar for nearly 15 years. She was most recently a designer at Theory, and prior to that, was creative director at Marc by Marc Jacobs, where she was the designer behind its original launch in 2000 — experiences that will play a big role in her approach to design at Gap.

And the company intends to make her presence there known as it makes the transition from a destination for basics to an aspirational fashion force.

“We don’t just manufacture clothes somewhere off in the world,” Ferlisi said. “We do design clothes here.”

With 987 adult Gap stores around the country, Gap has the ability to set the fashion tone for much of America. Most of its history has been defined by delivering iconic products like blue jeans, khakis and T-shirts, yet its attempts to introduce more fashion over the past decade have had mixed results. At one point in a series of disappointing quarterly financial filings in the Nineties, it seemed that Gap was constantly flip-flopping over whether it had offered too many basics or too much fashion.

Over the past year, however, the firm has shown considerable improvement, with four consecutive quarterly increases and a string of unexpected fashion hits, like blue corduroy pants, black leather jackets and pink trenchcoats, while the company has recaptured the fashion world’s attention with its fall ad campaigns featuring Madonna and Missy Elliott. In general, as fashion and design have become much more widely available and at a broad spectrum of price points, the success of the chain’s recent designer-driven items indicates Gap can be more things to more people, and that includes serving as a fashion destination.

“Because Gap is a multifaceted thing, it needs messages coming from many different people,” Ferlisi said. Madonna and Missy represent one side of Gap, and so do the series of actors and musicians who have appeared in its recent campaigns that target “Every Generation.” Ferlisi, herself an active 38-year-old mother of two married to Mario Fontana, who owns Ocean Drive and Habana restaurants in South Norwalk, Conn., represents yet another side of Gap. She lives a casual lifestyle and dresses in her own designs because, she said, “I’m a believer in wearing what you want other people to wear.”

“I came here because I liked what Gap represents, that it is very inclusive,” Ferlisi added. “I think it’s a feel-good brand. It’s optimistic. It’s real clothes that are accessible, and it’s friendly. Those are the values that appeal to me.”

Ferlisi first moved to New York in 1989 from Toronto, where she had met designer Gordon Henderson at a Holt Renfrew trunk show and asked him about jobs in fashion. “I told him I’d work for free,” she said. “He told me I could come and work for him for the summer, which I did. At the end of that summer, I told him I would have to leave. But he wouldn’t let me, so that’s how I started my story.”

She was soon hired away by Perry Ellis International, where Jacobs was designing at the time and was looking for someone to head up the company’s offshoot Portfolio collection. It was the season before Jacobs’ infamous grunge collection, in which Ferlisi had a hand. When that show bombed and Jacobs left, Ferlisi moved back to Toronto soon afterward. “I was totally bored,” she said. After a year, she landed a job at Tommy Hilfiger back in New York, and then eventually returned to work for Jacobs when he launched Marc by Marc. (When Ferlisi joined Gap, she hired Emma Hill, who was previously the accessories designer for Marc by Marc, as well as Louise Trotter, a women’s designer from CK Calvin Klein and Steve McSween, a men’s designer from Club Monaco.)

There are a few touches in the new look of Gap that would not seem in place in the Marc by Marc line, but Ferlisi’s approach to Gap aims at a much broader appeal. Gap is featuring three new cropped jeans silhouettes for spring — a pencil-leg style, a deep-cuffed jean with contrasting color details and the “coquette,” a looser style that is ruched at the cuff with a snap or zipper closure. On the basics end of the spectrum, Gap also will introduce gaucho-cut jeans and a cropped jeans jacket. There are baby polos, pearl-buttoned blouses in delicate prairie prints, camisoles with a Fifties-style dot print and shrunken cotton stretch cardigans and crewnecks. Colors include pink, blue and yellow solids and pink-and-orange or pink-and-green striped varieties — shades which, in Gap-speak, are called “milkshake pink,” “pink geranium” and “watercolor green.” Pointing to a small pocket on a pair of pink cotton cropped chinos, Ferlisi noted, “This is as cargo as we’re getting for the season.”

Emma Hill’s accessories include several sizes of cotton hobo bags based on the design of a trenchcoat, using a belt as the strap and big jeans-style buttons on twin exterior pockets. There are also leather totes — expected to retail for $58 — with pin-dot fabric linings that match a selection of scarves that Gap intends to be rolled and worn as belts.

“Fashion is important,” Ferlisi said. “Gap has the ability to create fashion. It’s not on a runway, but we can say, ‘This is a look we believe in,’ and then we can be fashion leaders in a different way. It the past, it was just the cargo. Now we’re saying, ‘It’s the cargo, the jacket, the T-shirt, the bag and the shoe.’ There’s a big difference between talking about wardrobing and just showing an item in 10 colors.”

The changing nature of Gap, Ferlisi noted, reflects the changing nature of fashion. Gap appeals to different customers in different ways, with fashion customers who come to the store looking for basics, and more traditional customers purchasing items they feel constitute a head-to-toe fashion look. In some cases, they are buying the same thing. From Ferlisi’s perspective, what’s changing most is that customers are shopping as much for the optimistic image and attitude projected today by Gap, even if they’re just looking for a T-shirt.

“The perception of what luxury used to be has always been an elitist approach,” she said. “People are now realizing they can get something that looks great without being covered in logos. People are becoming confident enough to say, ‘I know who Tom Ford is, and yes, he makes good clothes,’ but they also have enough confidence to know they can buy something from Gap and look great, too.”