Jeans Slim Down for Fall

Since fall merchandise hits the shelves in specialty and department stores in just a few months, retailers have started to anticipate what will be on consumers' "must-have" lists, especially when it comes to the most wanted item of all:...

By Lauren DeCarlo and Caperton Gillett on May 26, 2005
View Slideshow 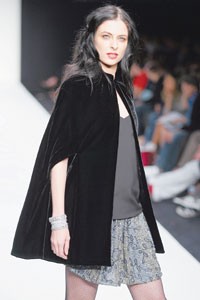 Since fall merchandise hits the shelves in specialty and department stores in just a few months, retailers have started to anticipate what will be on consumers’ “must-have” lists, especially when it comes to the most wanted item of all: denim.

Back-to-schoolers will find updated takes on the classic five-pocket: The leg is slimmer, the washes are richer and darker, and while embellishment is sticking around for another season, it gets a boost from colorful patchwork and beading.

“I think low- to midrise jeans with straighter legs and really rich washes, from light to dark, will score with young women this fall,” said Caren Watson, owner of The Jean Connection in Dallas. “Wash is extremely important. It’s about depth of color and the richness of the rinse. Embellishment on denim jeans, such as beading and embroidery, will pick up on the bohemian trend that’s so strong.”

The Jean Connection is gearing up for the fall and back-to-school season with a range of styles to please the store’s global customer base, said Watson. In addition to the store on Northwest Highway, The Jean Connection has a popular Web site at jeanconnection.com that specializes in unusual labels and myriad sizes.

Watson said sales are ahead by double digits compared with this time last year, with similar gains expected through back-to-school.

“Some young women want traditional styles, and others go for the fashion trends, but they all want jeans with a great fit,” Watson said. “If the jeans fit, they’re gold at retail.”

Armhole, a denim store in the Lakewood neighborhood near downtown Dallas, is getting ready for a Seventies flashback for bts, said manager Courtney Graham.

“There’s a strong Seventies vibe buzzing through the denim market, with a range of rich washes, a slightly looser fit, straighter legs and novelty details such as holes and rock ‘n’ roll embellishment,” said Graham, who noted that business is ahead compared with a year ago and cited best-selling brands such as Miss Sixty and Rock & Republic.

Jennifer Arrendale, co-owner of Blue Genes in Atlanta, sees this fall’s fashions as a respite from the bright colors and glitzy embellishments of the spring and summer.

“The detail wasn’t sequins and brighter colors,” Arrendale said. “It was much more subdued.”

Detail comes from shape and texture rather than embellishment, with oversized silhouettes, exaggerated sleeves and decorative necklines adding to a look that is “very feminine, but classic and sexy,” Arrendale said.

Luxury fabrics like cashmere, velvet and fur abound, designed more for style than for warmth. Arrendale said many designers are “making fashion pieces out of their coats, which is great in Atlanta, because it stays warm so long.”

Velvet blazers and capes, like Jenni Kayne’s oversized velvet piece, are expected to be popular, especially tied to fall’s cigarette-leg jeans. Arrendale sees fall trends as “totally item-driven,” merchandising them back to the jeans and offering a variety of accessories to create a variety of looks.

True fall weather rarely comes to Florida. “Anything for fall is going to be reflected in our accessories” and embellishments, said Susan Kaplan, managing partner of Teen Heaven in North Palm Beach. Fur trim and velvet ribbon on cropped sweaters, boleros and shrunken blazers are “about as wintery as we’re going get,” she said.

Fall will also be reflected in colors that retain the boldness of spring and summer citrus, but will tone it down into jewel tones.

A shrunken silhouette on top will be complemented by a fuller bottom, particularly in skirts that are longer and fuller than in summer.

“People will pick up those skirts, which are a great way to update their wardrobe for fall,” she said. “It will be very easy to go out and add that and a shrunken blazer to your wardrobe.”

Fuller gaucho pants are also in the running for fall, but Kaplan predicts that the trend will be short-lived, if it takes off at all.

Kaplan also finds fall to be overwhelmingly item-driven, almost to a fault. She finds that her customers have a hard time coordinating pieces with anything but jeans.

“So many manufacturers have moved away from the nicely coordinated group,” she said. “It’s really made it difficult to buy.”

Pacific Sunwear is adjusting its denim to reflect a change in consumer demand.

“We’re starting to see much more indigo product [for bts],” said Tom Kennedy, denim division president for Pacific Sunwear. “It feels like a much clearer blue, not the skater blue.”

Kennedy said the move away from a dirtier, darker wash is coming through in everything from the denim for surf and skate brands such as Volcom, which retails from $49.50 to $60, to the company’s own branded denim, named Tilt, which starts at $36.50.

The transition to a cleaner, crisper blue is also representative of the company’s move to respond to the trend for more feminine looks, said Kennedy. At the annual shareholders meeting last week, Pac Sun executives said they are working to bring the chain’s denim selection and its overall choice of more feminine products up to speed, as both areas have been underserved.

“We want to continue to be feminine and be conscious of it,” said Kennedy of both the denim and the company’s overall move to appeal to a more feminine look.

“Embellishment is a big change [for surf and skate], but now you’re starting to see repair versus total destruction,” he said, referring to patches and appliques placed on destructed jeans.

Another big change for the company’s own branded denim is that the price-point needle is moving up. Previously, the denim was $36.50 across the board, but now the range will be from $36.50 to $42.50. This also reflects the move from 100 percent stretch jeans to more rigid washes that can handle destruction better.

At Kitson, the trendy boutique on Los Angeles’ Robertson Boulevard, price is not an issue, and embroidery and embellishment are still hot. But the most sought-after look is really an intangible: exclusivity, said Kitson owner Fraser Ross.

“Everyone wants the new denim,” said Ross. “The ones who will win are not overexposed, because if customers are paying $300 to $400 [for jeans], you don’t want to see it on everyone.”

True Religion continues to be a best-selling brand at Kitson, but for fall Ross is expecting Adriano Goldschmied’s new line, GoldSign, to win over customers.

Also expected to be popular this fall is People’s Liberation, which is recognized by its signature etched-out star done in white stitching on the pocket. The denim label Stiches also continues to do huge business, said Ross, because of its looser fit, which he said is popular for bts denim.

To accommodate all the new lines and serve the voracious denim customer, Ross said he is going to give denim 200 more square feet of selling space, with a bigger denim bar at the store. “It’s all about recognition,” he said.

In New York, Macy’s is positioning denim as a major part of its strategy for fall.

“It ties to all categories and divisions in the company, from junior to better to contemporary,” said Nicole Fischelis, Macy’s East fashion director.

Fischelis said this fall she expects consumers to mix jeans with brocade and jackets.

“I think the embellished look will continue to be strong, especially in the junior market,” she said. “I think junior consumers will be very interested in embroidered and beaded styles, and logos. The junior denim market is very logo-driven.”

Fischelis said denim has become such a dominating part of a woman’s wardrobe that the question becomes, “What will I wear with my denim?”

“I think velvet jackets and tracksuit jackets will be very major,” she said. “It’s really how you mix and match the other elements of the season.”

As far as washes go, Fischelis said she’d like to see them get a bit cleaner.

“It’s still very much centered on the destroyed wash,” Fischelis said. “We’d like to see it go cleaner, but it’s all about cycles, so it’ll happen.”

At Atrium, a specialty boutique, denim is moving in a new direction. “Dark, clean, straight and skinny,” said Christine Lee, buyer of women’s wear at Atrium.

Lee said women are ready for a shift. Women who were wearing the classic five-pocket boot cut are gravitating toward straighter-leg styles, and girls who have been wearing straight styles are taking the trend one step further and wearing cigarette pants.

“The girls that were wearing the cigarette pants are going in another direction and are now into the baggy, ‘boyfriend’ style,” Lee said.

Consumers want the embellished look to continue, she said, but in a more subtle way.

“I think metallic stitching will be big for fall,” she said.

Jeans at Atrium retail between $140 and $350. Lee said Union, Joe’s and Seven For All Mankind “looked cute for fall” and noted that for her denim-savvy consumers, once they find what they love, they’ll stick with it.

“I know girls who have the same jeans in different lengths and sizes: one pair at one length to wear with flats, one to wear with heels, and one a size bigger so they’re comfortable for running errands,” she said.