Jenny has arrived in Las Vegas from the Block, leaving a trail of sequins, feathers and Yankees paraphernalia for her fans to follow. 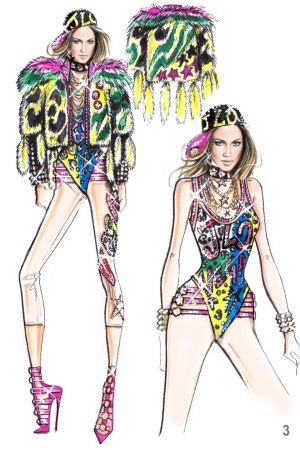 Jenny from the Block has arrived in Las Vegas, leaving a trail of sequins, feathers and Yankees paraphernalia for her fans to follow.

This story first appeared in the January 22, 2016 issue of WWD. Subscribe Today.

Jennifer Lopez kicked off her Sin City extravaganza at Planet Hollywood’s Axis Theater on the Strip Wednesday night with an array of costumes that reflected not only her own personal style but also her musical interests. After opening the show in a white feathered coat by Atelier Versace, she jumped into a hip-hop section in a bodysuit covered in color-blocked Swarovski crystals, pink beaded pants and white crystal Palazzo sneakers, all by Atelier Versace. She also showed off funk fashion with a multicolored bodysuit adorned in fringe from Balmain; a floral bodysuit by Nicolas Jebran, and an electronica-inspired ensemble consisting of a black-and-gold dress by Michael Costello that morphed into a winged catsuit topped with a Thirties-era hat. As the spectacle is aptly titled “All I Have,” Lopez gives everything.

“The bigger, the better,” said Mariel Haenn, who designed the costumes with her styling partner, Rob Zangardi.

This isn’t Haenn and Zangardi’s first time designing for Lopez on stage. They whipped up glitzy get-ups for her “Dance Again” world tour in 2012 and designed eye-catching costumes for other performances. This time, the challenge that Lopez posed to the stylists was: “How can we do as many quick changes and layers as possible?” Haenn said as she stepped into her Los Angeles home on Thursday morning after a celebratory all-nighter with her client of five years.

To jump-start the creative process, the trio shared as many as 200 pictures on a photo stream on their iPhones. Lopez selected the ones she liked, and Haenn and Zangardi organized the images into groups and broke down color options. A daunting suggestion from Lopez was: “Let’s do 10 changes in one song,” Haenn remembered. At one point in the show, the singer changes from sneakers to high heels by slipping her foot into a cutout in the stage for the shoe switcheroo. “Crazy — but we did it,” Haenn said.

The 46-year-old Lopez has done more in the first month of 2016 than most people do in a decade. She appears on the small screen in two shows, first glamming it up as a judge on the final season of “American Idol,” then sporting a mom-worthy bob and white sneakers to portray a cop on the TV drama “Shades of Blue.”

With her strong sense of style, Haenn said Lopez pulled from so many things that can be associated with her. For instance, a crystal-studded Yankees hat. “I can’t imagine anyone in Las Vegas doing that,” she said.

Considering that the show is scheduled to run for three years, both fans and fashion lovers can expect to see a new round of sequins, feathers and crystals in the future. After all, Haenn said, “I’m sure it’ll evolve.”