Scott’s design, with glossy white exterior, will be revealed at the L.A. Auto Show on Nov. 30. 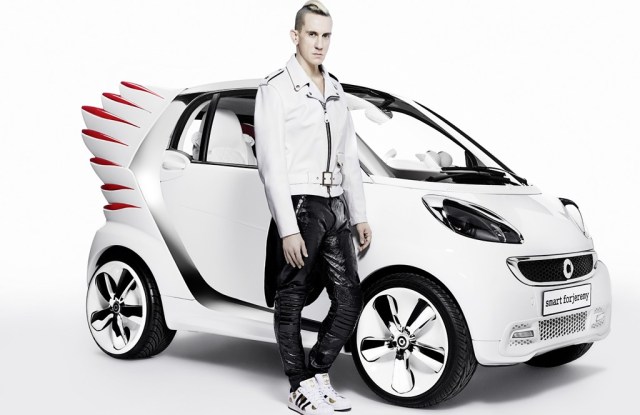 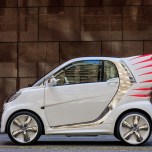 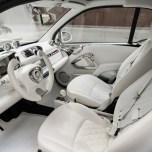 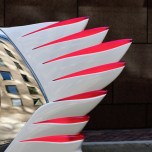 The Los Angeles-based designer, who has previously collaborated with Adidas, Longchamp and Swatch, now has left his mark on the pint-size auto brand, Smart.

Scott’s design, with glossy white exterior, will be revealed at the L.A. Auto Show on Nov. 30. The two seater’s white leather and chrome interior is a nod to racecars and airplanes from an era when people looked forward to flying.

The air conditioning vents evoke Madonna’s cone bra or an old school juicer. The steering wheel and front-fasten, harness seatbelts look like they could be from a chic arcade game. The quilted leather is reminiscent of a high quality handbag.

Scott tried to capture the awe of a pristine vintage car, but with a contemporary twist. Los Angeles car culture and a nostalgic way of imagining the future served as inspiration. Scott also wanted Smart’s Fortwo Electric Drive, (Fortwo is an existing Smart model, but the Fortwo Electric Drive is the company’s first zero-emission vehicle), to be eye-catching. “It should feel sexy, exciting…it shouldn’t feel nerdy,” he said.

The designer predicts “cool kids” who want something special will be first in line to buy the limited edition car when it becomes available next year. The current show model has not yet been priced for retail. Kanye West said he had to have it when Scott showed him pictures of the design during a dinner in Paris.

Scott was initially nervous about bringing his sketch to fruition, but Smart gave him free reign to reimagine the car, and he was hands-on throughout the yearlong design process. The slower pace was a welcome change from the rapid fashion cycle. Although Scott does not know where he will find a bigger design challenge, he is excited that the final product reflects his aesthetic, and noted he was pleased “to finally share it with everyone. I’ve kept it a secret for over a year, and it’s been burning inside me.”

The Smart car is a result of a joint venture between Daimler-Benz AG and SMH, makers of Swatch watches. The venture was formed in 1993 and the car was introduced in nine European countries five years later, launching in the US in 2008.