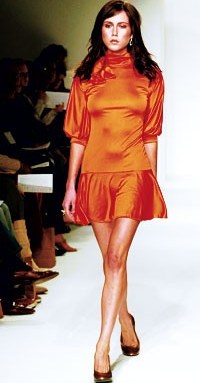 At the weekend, some designers let their imaginations run wild, whether in response to the beat of a military drum, the call of the African wild or the chorus of a gaggle of flirts.

There was jersey, jersey everywhere. Perhaps it’s the gym-slimmed, beach bodies of Southern California that are prompting every L.A. designer to drape the fabric in their collections. But while this trend — draped jersey, that is — may be on the verge of overexposure, Editte Keshishyan, at least, managed to keep the look fresh. Her dress versions in teal, fawn gray and fuchsia, featuring gathered yokes and blouson tops and dropped waists, had a pearly sheen. Her lean pants and pencil skirts, some done in cotton twill, were also well executed.

At Susana Mercedes, chic clothes competed with over-adorned and textured show pieces. Mercedes translated sumptuous materials into ladylike essentials, but the skirts covered in squiggles of appliquéd ribbon or the itchy-looking mohair lace could be turned down a notch. Her takes on understated elegance, such as a lace-trimmed sheath dress or the fitted black top and skirt decorated lightly with?fabric buttons, spoke volumes, however. At the other end of the spectrum, Da Nang’s Estelle Dahan’s message was clear — easy does it. Sun-bleached cotton camo jackets paired with mesh tank tops and combat boots made for rugged glamour. Traditional military pieces looked inviting in muted pink and faded army green tones.

Fashion also welcomed Lloyd Klein back to the runway. En route to the airport in Paris, on his way to show in New York in February, Klein and members of his staff were involved in a several-vehicle collision from which the designer sustained multiple injuries. The entire collection was destroyed and he had three weeks to re-create it, probably not enough time to fully suss out his African theme of wild things and warriors. There were fox fur chubbies, cropped calfskin jackets and leopard-print jersey dresses, all punctuated by Masai armor and victory necklaces. The designer’s standout pieces included a tailored gray cashmere jacket, high-waisted gray flannel pants and a brown velour jumpsuit.

And where have all the pretty girls gone? That was the million-dollar question at Heike Jarick, where the lovely feminine dresses she’s known for were nearly absent. In their place was a range of themes, from “Clockwork Orange” looks to equestrian gear. Luxurious furs, wool mohair and silk looked great in structured coats, pants and twisted cowl-neck sweaters at John Sakalis, but the designer should not have diluted this new sophistication with tarty China doll looks in predictable red brocade. The Asian theme seemed like a space filler, save one crinkled silk cape in a red floral pattern where the Eastern influence was light and inventive.

Imagining an S&M secretary hopelessly in love with Tony Montana of “Scarface,” London-based designer J. Maskrey presented a fun, sparkly collection on the rooftop of the Downtown Standard Hotel. Red and black silk chiffon dresses were embroidered with starbursts, miniskirts had waterfalls of beaded fringe and Margaret Thatcher-esque blouses were sexed up with Swarovski diamond dog collars. Elsewhere, Martin Martin’s husband-wife team Eric and Diane Moss-Martin may have found an audience for their arty, Japanese-inspired line, but it’s high time they came up with some new tricks. Their collection of backward and upside-down white shirts and black bottoms and dresses with the odd red or brown piece thrown in was simply a repeat of last season’s offering.