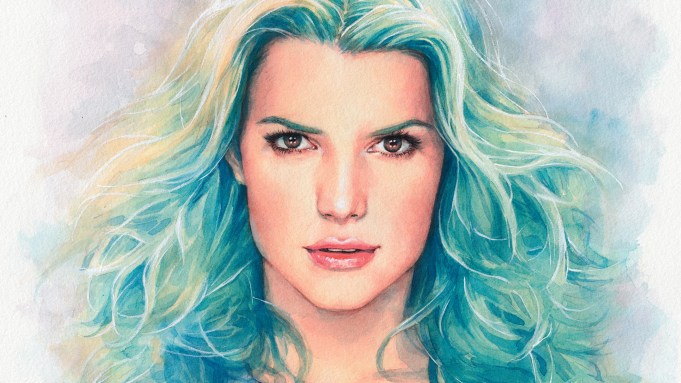 A decade in, Jessica Simpson’s label has evolved into a $1 billion lifestyle brand at retail, and the company has aspirations to double — or even triple — volume in the next 10 years.

Part of the route to this lofty goal includes new product lines, such as activewear and another fragrance developed especially for the decade milestone. Yehuda Shmidman, chief executive officer of Sequential Brands Group, which acquired a majority interest in the Jessica Simpson brand in April, pointed to several avenues of growth potential for the label.

“There’s growth outside America,” he said. “We’ve already had interest from several parties [for freestanding stores]. We also see certain pillar categories for the brand, such as activewear. And there are some other channels for growth, such as e-commerce and mobile commerce. We’re looking at all different ways to get the product into the hands of her customers.”

While the business has an extensive wholesale component, the e-commerce and mobile platforms need to be built. As for international options, the company hopes to capitalize on footwear’s distribution base in 55 countries. Sequential is considering markets in which it should enter or expand, and the right operating partners for various regions. Shmidman said interest has come from Asia, Latin America and the Middle East. “It’s a matter of finding the right partners and the right commitment so when we do launch, we’ll get maximum benefits to set ourselves up for [growth] for the next 10 years,” he said.

One launch pegged to the 10th anniversary is a fragrance, Jessica Simpson Ten, which is actually her eighth scent. The license is in its seventh year.

“We’ve watched the girl-next-door grow up,” said Don Loftus, president of Parlux Fragrances Inc., Simpson’s fragrance licensee. “And 10 years later, she’s proven her sustainability. She has a great sense of humor, [but] she takes the creation of her products seriously. There’s a continuity to all of her products, from category to category, even down to the gifts-with-purchase for the fragrances.”

The scent, which Simpson created with Marypierre Julien of Givaudan, has top notes of clementine, star fruit, nectarine, plum and watery fruits; a heart of frangipani, night-blooming jasmine, orange flower and tiger lily, and a base of vanilla, white chocolate bean accord, sandalwood, tonka bean and driftwood.

The limited-edition scent, $67 for a 3.4-oz. eau de parfum spray, is a flanker to Jessica Simpson Signature, launched in 2014. “As Jessica has matured, so have her fragrances,” said Loftus. While Fancy, launched in 2008, was heavy on the fruit notes, her following scents — Fancy Love, released in 2009; Fancy Nights, launched in 2010; I Fancy You, launched in 2011; the limited-edition Vintage Bloom, which bowed in 2012; Fancy Girl, out in 2014, as well as the aforementioned Signature and Ten — have gotten progressively more sophisticated.

Simpson’s scents are distributed in about 3,000 department and specialty store doors in the U.S. Simpson’s fragrance portfolio is said to generate annual sales of about $30 million at retail in the U.S.

Sequential’s ceo said he was attracted to the acquisition opportunity because of Simpson’s foothold in entertainment as well as fashion. The growth of the first decade was largely owing to the vision of the late Vince Camuto, founder of the Camuto Group. Initially a footwear label, Camuto expanded the brand when his firm became the master licensee. And as Jessica Simpson herself matured, the line expanded from mostly a junior-focused label to also include the now core contemporary lifestyle brand.

Alex DelCielo, ceo of Camuto Group, said, “When Camuto Group first took home the master license, the natural thing for us was footwear. That’s our specialty, our strength. We saw a great opportunity with the cowboy boots Jessica wore in ‘The Dukes of Hazzard.’”

Under Camuto, the product line grew to 31 categories, among them outerwear, eyewear and accessories, jeanswear, sportswear, tweens and toddlers, fine jewelry, and last year, home goods.

“When we first started, it was a celebrity brand. Today it is a brand, and footwear has grown with the other categories,” DelCielo said. Camuto Group just signed on as the footwear licensee for another five years.

One Jeanswear Group is the licensee for jeanswear and sportswear. Jack Gross, president, said, “I met with Vince in 2006 — then we were considered a moderate company. For us to be looked at as a better or contemporary company, we needed something a little sexier than what we had. I saw Jessica in other categories and that piqued my interest.”

The company’s licenses with Camuto were renewed with Sequential prior to the closing of the acquisition. According to Gross, half of the retail doors carry the junior line, while the other half has the contemporary offering.

“When Jessica started, the company was in the junior contemporary [arena] and as Jessica got older, the brand took on a more misses’ contemporary attitude,” Gross said of the evolution.

And while other brands, particularly those backed by a celebrity, come and go, Jessica Simpson has had staying power. Gross said that’s because the “DNA has not wavered. There is a consistent point of view.”

He added that Jessica and her mother, Tina, “are very involved and very collaborative. They have definite ideas on what they see for the brand.” Design teams from One Jeanswear work with Simpson’s teams in California and in New York, and the mother-daughter duo are involved in all decisions for the lines.

“They are very thorough, down to looking at buttons and trim. They take pride in looking at products to make sure they exemplify Jessica’s ideas,” Gross said. “Tina looks at it from a brand management standpoint…She is aware of the competitive landscape and wants the brand to have a point of view.”

Wholesale prices rang from $12.50 to $25. Jeans retail around $69 a pair. Gross sees a resurgence in denim, and believes there’s long-term growth for the category as “the tween now wants to look like a junior customer.”

The Jessica Simpson brand has been sold at Macy’s since its inception, and the retailer will have the exclusive debut of the activewear collection this fall.

Martine Reardon, Macy Inc.’s chief marketing officer, said Simpson has a loyal consumer base and attributes the brand’s longevity to the product. “The design sensibility Jessica gives the product is fashion-right, but not too far over the edge and not throwaway trends.”

Reardon said new product categories build consumer confidence in the brand, and the brand then “builds in an audience waiting for the next category.”

She said that over the years, “We’ve all sort of been growing up with her. As she’s gotten older, her lifestyle has changed and she’s recognized the categories that are important for her to be in. It shows how she’s really rounded out her assortment.”

Tina Simpson has been a key partner to her daughter in the development of the brand. “We usually don’t have a difference of opinion,” Tina said. “Jessica is the brand’s muse. She trusts me to pick out the color palettes [and the direction for the line]. I show it to her always. She’s constantly sending me [her] inspiration. She’s online more than I am. She’s always shopping on the Internet.”

The two Simpsons are in the stores once a month to gauge how the brand is doing, and head to Europe twice a year for inspiration. “We make sure the merchandise looks good and that we are getting the attention we want on the [sales] floor,” Tina said.

Helping them now will be Jameel Spencer, division president for fashion and entertainment at Sequential.Following the introduction of activewear will be an infants’ line. Baby products are slated to hit stores in the spring.

Spencer sees Sequential’s contribution to the business as “accretive,” while Jessica Simpson helps the firm target a customer base “we didn’t currently have.” Home is expected to present another significant avenue for the brand. “Other opportunities include beauty and nutrition. Crafting can be huge,” Spencer suggested. “There’s no limit to where we can take this brand.”

As for freestanding stores, he said, “We’re in discussions and are in the process of building [the store concept], as well as what the business opportunity would be. We are working with Jessica and Tina on the vision for a flagship, and there are also versions such as the shop-in-shop experience. We hope to get it going in
2016.”