Jet Lag Sets Its Sights on Women for Spring

Jet Lag, a Berlin-based men's premium denim brand, is looking to attract fashion-savvy women willing to pay for premium denim with a new line that will hit stores this spring. 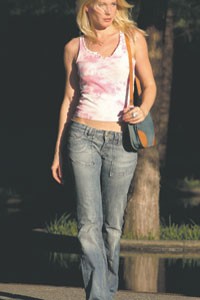 DALLAS — Jet Lag, a Berlin-based men’s premium denim brand, is looking to attract fashion-savvy women willing to pay for premium denim with a new line that will hit stores this spring.

Founder and designer Yosi Cohen applies a less-is-more philosophy to the line, offering only four women’s styles in two or three washes for the spring collection.

Dallas-based TriColor International holds the exclusive distribution rights for North America. With wholesale prices ranging between $79 and $99, U.S. sales are projected to hit $3 million this year. The introduction of the women’s collection is expected to bump sales up to $7 million in 2006.

“Jet Lag already has an incredible following in Europe, especially in Germany where the company is based, Russia, Austria, Poland and Denmark, and we sell to over 300 specialty store accounts in the U.S. now with men’s. We expect many of those stores to pick up the women’s line, too,” said Di Bitonto. “We’re selling at least 2,000 pairs of denim jeans a day in Europe and will generate about 50 million euros [$60 million] in 2005 in Germany alone.”

In addition to Fashion Industry Gallery in Dallas, Jet Lag wholesales at markets in Los Angeles, Chicago and Atlanta, and plans to open a New York showroom in 2006.