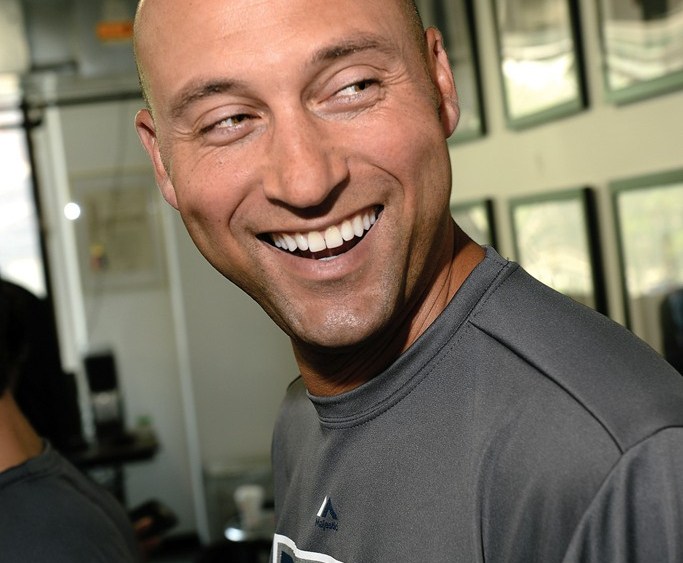 “Derek Jeter picked it for me,” exclaimed Leon Clarke Jr., 24, dressed in a black, fitted suit from DKNY. He had just stepped out of a room filled with an assemblage of blazers, trousers, shirts and ties in a medley of colors and prints, having been styled by none other than the Yankees star. “He literally measured my neck and shoulders, asking if I work out. He’s so down-to-earth — taller than what I had expected.”

Clarke was giddy as he walked out of the small room, before declaring it was “by far the best day” of his life.

Not many men get the opportunity to have Derek “The Captain” Jeter personally pick out a suit and carefully measure his neck and chest as he playfully shouts, “Flex, flex!” with a tape measure in hand.

The Brooklyn-based Clarke was one of a group of six chosen by Career Gear — an organization that provides professional clothing, mentoring and life skills to men in need — and the Yankees’ Hope Week to be recognized for contributions to their communities through empowering and mentoring other men. The Yankees later donated $10,000 to Career Gear while DKNY, a longtime sponsor of the team, helped host Tuesday’s event.

The six men — clad in gray Hope Week T-shirts — had trekked to the Career Gear offices in lower Manhattan to hear they were being honored. They were oblivious to the fact that they would also meet members of the Yankees, as well as Jenny Steinbrenner, daughter of the late Yankees owner George Steinbrenner, who later handed the organization a $10,000 check.

The occasion was the start of the Yankees’ sixth annual Hope Week, one that aims to give back to the community through various outreach programs. In the past, the team has worked with organizations like the Daniel’s Music Foundation, which helps disabled men, women and children receive free therapeutic music instruction. In 2010, Hope Week honored Mohamed Kamara, who less than 10 years ago was struggling to provide food for his family in war-torn Sierra Leone, and helped secure him a paid internship with the New York Stock Exchange for the summer of 2011.

On Tuesday, while cameras clicked, each of the six men sat quietly in a half-circle, unaware of what was going on.

“I feel like a star,” Rodney Gordon said. Once incarcerated, the 55-year-old resident of East New York now volunteers with Career Gear, which gave him his first nice suit.

“I honestly came here a few years back, and I was just actually coming back from being in incarceration, going on an interview and was looking for a suit,” Gordon said. “Eventually this place became extended family for me. Aside from the suit they helped me get a job at the Samaritan Village. Now I’m volunteering here and am an intern, letting other people learn from my experiences.”

Sitting next to him was Dion Thompson, 48, who has had a history of substance abuse. Through Career Gear he was able to secure a job at Daytop, a substance abuse center. “I remember my first suit they gave me,” he said. “Brooks Brothers. Pin-striped. Changed my life.”

Minutes later, their eyes lit up and their smiles widened as they glimpsed not only Jeter walking toward them, but also Yankees players Hiroki Kuroda, Brian Roberts, Jacoby Ellsbury and Alfonso Soriano.

For the day, the players traded in their suits or Yankees uniforms for matching gray Hope Week Ts to be in unison with the men they were to meet. “Hey guys! Good meeting you,” Jeter said, shaking each of the men’s hands.

Each of the players took a seat next to the men, who quickly introduced themselves. One, Coss Marte, admitted going from making $2 million a year as a drug kingpin and later serving four years in prison to now creating a positive “prison-based” workout program.

“I was 240 pounds and lost 70 in six months,” he said. “I had no clothing that fit and came to Career Gear seeking a new suit. I left that day, transforming my illegal hustle to something positive.”

“I just want to say I feel like crying,” Norman Gaye said, misty-eyed. He said he grew up in the Bronx, adding, “I used to walk to Yankee Stadium and watch batting practices with [players] like Joe Pepitone, Tony Kubek, Yogi Berra, and now I see you guys in person. It’s a moment for me. I have a history of drug abuse, homelessness, but now, through this organization, I can finally get my life back around.”

Their lives would be enhanced now with their new suits, elevated by the experience of having five of the players pick out their suits from DKNY. One-by-one the men sauntered into a fitting room with each of the players.

“Hey, this looks like it’ll fit,” Roberts said to one of the men, handing him a blazer.

“Let me measure your neck,” Soriano offered, talking like a tailor.

“Jeter, you gotta get his tie — tie him up,” Roberts shouted.

“It’s crazy how many guys on our own team don’t know how to tie a tie, and I’m not just talking about the rookies,” said Jason Zillo, the press officer for the Yankees.

It was obvious that pulling the clothes was the extent of what the baseball players were able to do.

For professional fittings, the men rushed over to Margarette Sampson, Donna Karan’s personal patternmaker. She spruced the men’s looks for the cameras in a frenzied five minutes.

A few minutes later, Gordon walked out of the dressing room clad in his fitted suit. He spoke to Jeter for a few moments.

“You know, my cousin, George Brown Jr., was a batboy for the Yankees. I asked Jeter if he remembered him, and of course he did,” he said. “Jeter actually helped pay for him to get his education a few years back. He asked how he was doing, and I told him because of him he’s still patrolling the stadium.”

“Yeah, George,” Jeter confirmed. “He was a batboy with us for a long time. It was probably around 10 years ago. Now he’s a police officer running around the stadium.”

Asked if it was because of his help, Jeter replied, “I don’t know about that. If he wants to tell that story, he can tell that story. I’m glad he’s doing well.”

Jeter, who ends his 20-year career this season, is no stranger to charity work. The 39-year-old’s other philanthropic efforts include the Turn 2 Foundation, which helps teens and children avoid drug and alcohol addiction.

As for his teammates, they were naturally filled with nothing but praise. “He’s given me a lot,” said Roberts, the Yankees’ second baseman. “He was one of those guys earlier in my career who helped me a lot. In around 2003 when I was starting off, he boosted my confidence by saying that he thought I could hit .300 in the big leagues and be big in my career. I don’t know whether he believed in me or not, but when you’re young and impressionable it’s everything to you. I owe him for that.”

Roberts — who said he’d retire in the next few years — said he was sad to see his teammate leave. “On and off the field, all good things come to an end, but it doesn’t mean at all he’s going away. It’s sad, though, that it’s his last year,” he said.

Last year or not, Jeter said he’s ending on a high note: “I still have a future [in baseball] now that I have to focus on.”

And when it came to the task at hand — styling — Jeter was equally focused.

“I think that’s what this week [Yankees Hope Week] is about, to recognize people who give back to the community, and for us it’s fun to be a part of,” he said, sporting white Nike high-tops and a Movado watch (he has an endorsement contract with the brand). “You know, you hear stories, but to actually come out and meet the guys and the wonderful people that are doing this sort of hits home for us. It’s a week we all look forward to as players.”

If that means Jeter — who isn’t known for his love of fashion — has to play stylist, he’ll be game.

“Well, I think clothes make you feel good,” he said. “I put on a pin-stripe uniform every day, so I feel pretty good when I’m out there playing, but I think that obviously when you have better clothes on, you feel pretty good about yourself and you know on top of the clothes these guys are getting great mentorships and workshops that they’re attending. So this is something that can be life changing.”

Perhaps a styling future is in the horizon after retirement?

“I have enough problems putting this together,” he said. “[I have on] jeans and a T-shirt, so I need as much help as I can get. My sister will pick some things out — she’ll purchase some things for me and send them to me. So I don’t really know much about clothes, I guess!”

“In terms of styling experience, I mean, not really. I have three younger brothers and that’s pretty much the extent of it, but this was pretty neat,” he said.

When it comes to personal style, he said it’s help from his wife Kelsey that gets him through the day.

“It’s a little combo, you know. I’ll put it on and see what she thinks, and you know, most of the time it’s pretty good, but other times she’ll let me know, ‘Hey, maybe not that,’” he said.

In terms of the best-dressed teammate? Both Ellsbury and Kuroda nominated Roberts.

“Me? They picked me?” Roberts said, smiling. “Well, I do like fashion, I enjoy it. I like Diesel, Ted Baker and Armani suits. But my wife likes to shop and she dresses me, so my style definitely got better after I got married. Jeter has good style, too.”

Whether it’s fashion-related or not, Jeter is obviously eyeing a future after baseball. He’s already embarked on a publishing venture, Jeter Publishing, a partnership with Simon & Schuster. The company’s first book, “The Contract,” a novel for readers ages eight to 12 and loosely based on Jeter’s own life, will make its debut later this year.

Asked if there would be any fashion books down the line, Jeter coyly answered: “I can’t tell you that now. I don’t know about that, but I have to announce that first.”