Fine jewelry firms, faced with record-high gold and platinum prices and a flailing U.S. economy, are starting to feel the pinch. 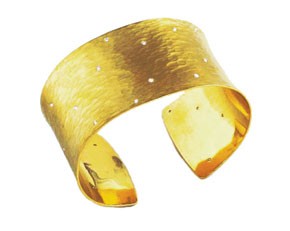 Fine jewelry firms, faced with record-high gold and platinum prices and a flailing U.S. economy, are starting to feel the pinch.

Companies are being forced to raise their gold jewelry prices by 10 to 20 percent this spring, after a few years of trying not to pass along the raw material price increases to consumers. Gold closed on Friday at $1,003.30 per troy ounce, silver at $20.72 and platinum hit $2,080 compared with a year ago when gold was at $655 an ounce, silver was $13 and platinum was $1,226.

While they need to restock their showcases, retailers are exerting extreme caution in what lines they buy and in what quantities. Some jewelry firms said they are scaling back projections, while others have felt little falloff in business.

To combat soaring gold and platinum prices, many firms are pushing new silver lines. Stephen Webster, Anthony Nak, Leslie Greene, Sarah Perlis and Ippolita are a few that have launched silver collections. Companies that have both silver and gold collections are doing better with silver at the moment.

“I’m huge into scale and the one thing you can’t do in gold is go really big,” said Ippolita, who goes by one name, in February.

“We had a very good January and February, despite [the price increase],” said designer Temple St. Clair Carr.

St. Clair Carr said the show was successful. This time around, 700 designers and manufacturers exhibited and 8,150 buyers attended. The trade show is typically held in January and will go back to that time frame next year.

“We were over plan for January and February. We haven’t seen the resistance yet,” said the company’s chief executive officer, Marion Davidson, adding a lot of retailers don’t carry much of the firm’s all-gold jewelry. Silver and the two-tone metal collections make up most of the company’s sales.

John Hardy is increasing prices, but is also improving product.

The company is retiring old pieces, while adding pieces that are similar, but at a slightly higher price. For instance, a $595 Kali Menari silver cuff is being phased out of the collection, and a new version of it with more silver and details is being launched at the price of $795.

“In the next 18 months, we will focus on making our retailers successful, then the growth will come naturally,” added Dernoncourt.

In a strategy to boost sales in stores such as Neiman Marcus, Saks Fifth Avenue and Bloomingdale’s, Dernoncourt and designer Guy Bedarida will do more personal appearances.

“Being on the road is the most powerful thing you can do for your brand,” said Bedarida.

Many companies are scaling down their sales projections for 2008, but say that it’s all part of the cycle, while other brands are focusing on international markets such as Russia, China and the Middle East for the first time.

At the high end — jewelry costing $10,000 and up — brands are continuing to introduce expensive pieces, as they say consumers still want to see newness even if they aren’t buying as much.

“Our business is constantly growing,” said Anjanette Clisura, president of Diamond in the Rough, which creates jewelry incorporating rough and cut-and-polished diamonds, with an average price of $18,000. “They’re looking for new, they’re looking for luxury, and there’s no signs of stopping.”

The company will soon unveil a $1 million piece and Clisura said the demand exceeds the supply.

“The demand has started to reach out internationally,” she said.

The line has been picked up by Moussaieff Jewelers Ltd. in London and in Diamond SA in the Venetian resort in Macau.

Marc Hruschka, Chopard’s U.S. president and ceo, said “There are pockets of areas where we’re concerned, but overall the business is good, steady and strong. It would be irresponsible to say we’re not concerned about how the economy would affect our business.”

Chopard initiated a price increase in March in the U.S., its first in three years.

“Gold is an important component of our business and we will keep buying it as long as the customer has the desire for the product,” said Bergdorf Goodman’s newly appointed vice president and divisional merchandise manager of the jewelry division, Jodi Kaplan, who succeeded Sydney Price.

“Yes, we are buying with caution, but we are not running scared,” said Jamie Camche, co-owner of JL Rocks, a two-unit jewelry retailer in Connecticut. “We have had a strong first quarter, as we feel with the current prices of shoes and apparel, our women are looking to our jewelry as their primary accessory.”

“I haven’t seen a dramatic drop in interest in these products; however, traffic is a little slower and people are more nervous about the economy than gold prices,” Rosenheim said. “I continue to buy some new product, but carefully. It is a time for caution and I see this year a little down from last year.”