Jewelry brands such as Cartier, de Grisogono, Bulgari, Asprey and Chopard may bring to mind high-wattage sparklers but, spurred by the enduring "It" bag trend, a growing number of fine jewelers are extending their monikers and glitzy heritages to...

By Katya Foreman and Lucie Greene on December 28, 2007
View Slideshow 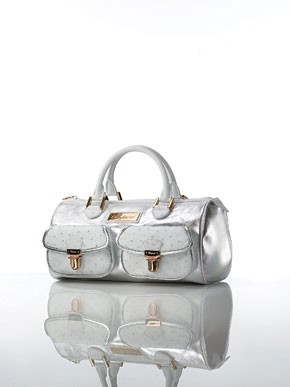 PARIS — Jewelry brands such as Cartier, de Grisogono, Bulgari, Asprey and Chopard may bring to mind high-wattage sparklers but, spurred by the enduring “It” bag trend, a growing number of fine jewelers are extending their monikers and glitzy heritages to leather goods lines.

Having introduced bags in 1997, Bulgari’s “aggressive pursuit” of the leather goods category, according to chief executive officer Francesco Trapani, took off two years ago. Today, the brand counts five accessories-only stores, including its new Rome flagship.

“The traffic in the accessories stores is different from that of the jewelry stores,” said Trapani, referring to a younger clientele on the hunt for products retailing for under $1,500.

Chopard is also looking to carve out a separate retail channel for its leather goods, having opened its first accessories-only store in Kuwait in 2006, followed by another in Dubai this year.

“There is a huge potential for our accessories in some regions and at the same time we need to protect [our] high jewelry clientele,” said Davide Traxler, director of Chopard in Italy.

Citing “high-double-digit growth” for the bag line since its launch in 2004, Traxler hinted that more accessories-only stores are in the works.

“It is in fact a response to demand,” he said, adding the spring line will include white ostrich, rose gold finishes and “reptiles galore.”

“The fashion world has invaded the bag world and that’s the real phenomenon,” said Pierre Rainero, Cartier’s director of strategy and patrimony.

Cartier launched its best-selling Marcello bag line in June, backed by a robust media campaign. While the event marks the jeweler’s first foray into day bags, the house is no stranger to accessories.

“In the 19th century, it was common practice for a lady to go to Cartier for any variety of elegant accoutrements, be it an umbrella decorated with ivory and coral, say, or a bag,” said Rainero, adding that Cartier’s first bag department opened in the Twenties, offering a range of leather and fabric styles. “We aim to resurrect that [universe]. We are a jewelry house, but we have always had in-house savoir-faire for bags. And we have an incredible archive of designs.”

Eschewing come-and-go trends, many jewelry brands are aligning their collections with those of traditional leather goods houses, such as Hermès.

“The bags have nothing to do with our jewelry,” said Fawaz Gruosi, ceo of de Grisogono, which launched its first bag collection last month. “They are handbags in the true sense, with no stones or precious metals. They represent extreme luxury in terms of materials and finishing, but function was also a priority.”

Gruosi said the bags retail from around $2,500 to $12,000. Each bag, from beach styles to evening clutches, sports a practical BlackBerry pocket, for example.

“Our bags are investment pieces, not ‘It’ bags, something that can be worn season after season,” said Asprey’s creative director Hakan Rosenius, who joined the firm 18 months ago. “The brief alongside the jewelry was to develop the leather goods and ready-to-wear, to bring it up to a level which was synonymous with the jewelry.”

Asprey has long been renowned for its leather goods, from handbags to luggage, but hasn’t been a major player in the bag category in recent years. With the release of the company’s python and gold Portobello bag for spring, as well as two to three subsequent styles planned for fall, Rosenius’ aim is to establish five to six permanent classics for the house. Currently representing 10 to 12 percent of Asprey’s sales, the percentage should grow in 2008, he predicted.

Cartier also hopes its nascent Marcello bag is a classic in the making.

“We’re not thinking in terms of short-term trends, but more of a way of life,” said Rainero, who declined to comment on sales targets for the bag.

For many jewelry brands, exclusive distribution is one strategy for standing out from the pack, generally limited to their own stores, as well as a sprinkling of high-end international fashion and travel retail doors.

“You will not see many de Grisogono bags around the world,” said Gruosi. “At the moment, we do very small production and small volumes. We want to keep it limited.”

And make no mistake: The jewelry brands are generally aiming for the upper end of the handbag market. An alligator bag at Asprey, for example, goes from around $7,000 to $13,000.

“Our bags can range anywhere between a few thousand dollars and over $50,000 for a one-of-a-kind alligator Twist bag decorated with 18-carat gold and diamonds,” said Rosenius.

While fragrance and eyewear lines have become extensions for many jewelry brands, a number of players are divided on the matter of leather goods. Executives at Van Cleef & Arpels, for example, which founded the minaudière in the late Twenties and was the first jeweler, in 1972, to launch a scent, equate straying from the house’s core jewelry business with diluting the brand’s name.

“Cartier has the policy of being a global brand with a large offering, whereas we view ourselves as the essence of the Place Vendôme, and bags do not have their place there,” said a Van Cleef spokesman, noting the house is instead lining up a series of one-off collaborations that will likely include accessories. “It’s more a question of artistic expression for the brand.”

Similarly, Boucheron, which launched an eyewear collection in 1994 and also has a fragrance, ruled out the possibility of branching out into leather goods.

“We’ll stick to some very exclusive collaborations,” said a spokeswoman for the firm, which launched a limited edition bejeweled Alexander McQueen Novak bag in 2006.

“A jeweler should remain a jeweler,” insisted de Grisogono’s Gruosi, who views his bag line as nothing more than a “fun exercise in creative whimsy.”

“Already, for me, it was a bit too much to extend into watches,” he added. “If we want to remain true jewelry brands it has to stay separate. Otherwise we’ll all turn into department stores.”