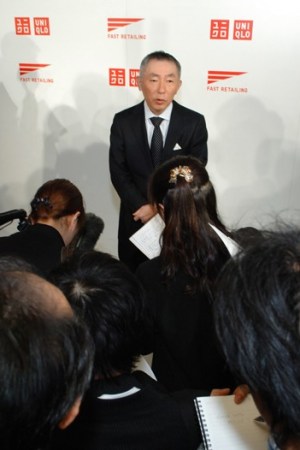 TOKYO — “Let us talk today about the future.”

So said Jil Sander at the press conference here Tuesday confirming her much-awaited comeback to the fashion world as a design consultant to Japan fast-fashion giant Uniqlo. The German designer will oversee the brand’s women’s and men’s apparel collections, as reported exclusively in WWD Tuesday.

“Some of you [have known] me since I have been engaged in fashion, but I’m not interested in the past,” said Sander, who left her namesake label for the second time in 2004. “Let us talk today about the future. I’m here in Tokyo for something completely different. The challenge for me is to establish a premium quality in a democratically priced range.”

The stock market welcomed the news, lifting Uniqlo parent Fast Retailing Co. Ltd.’s shares up 8.6 percent to close at 11,020 yen, or $111.76, against a 3.2 percent rise for the blue chip Nikkei index.

As reported, Sander will not receive an official title at the company, but she will take over the creative control for all the retailer’s products, excluding accessories and children’s wear. The Japanese brand and Sander are also working to develop a special Uniqlo collection set to bow for the fall season. Details regarding the line — including its name — have not been disclosed. Obviously, Fast Retailing will need to find a creative detour around the fact that fellow Japanese fashion firm Onward Holdings Co. Ltd. owns the designer’s former fashion house and retains commercial rights to her full name.

Fast Retailing chairman Tadashi Yanai described Sander as “top of the top” and said he didn’t have any other candidates for the role. The executive credited the designer for developing the “modern basic.” During a press conference at the Four Seasons hotel here, he also mentioned the designer’s cachet could justify some price increases for Uniqlo.

Fast Retailing executives declined to specify the duration of Sander’s contract. The designer, clad in a black knee-length coat, stated she had received “a lot of offers from many companies” since leaving the fashion world, but she ultimately decided to try something “completely different” and work exclusively for the Japanese label.

“My passion has always been quality and pureness. Now I am looking forward to establishing a new value in the world,” said Sander, known for her minimalist and highly controlled aesthetic. Although the reclusive designer appeared slightly nervous at the press conference, she appeared to warm up during the subsequent photo session — to the point of giving Yanai a small peck on the cheek.

A short while later, Yanai and Sander mingled at a cocktail party with Japanese fashion editors and executives including Ricky C. Sasaki, president and chief executive officer of Fast Retailing subsidiary Link Theory Holdings Co. Ltd. At the event, Fast Retailing vice president Yukihiro Katsuta recalled how the company’s initial contact with Sander went back as far as last June. The deal was a long one in the making, but it wasn’t difficult establishing that first contact, he shared.

“I just picked up the phone,” he said.