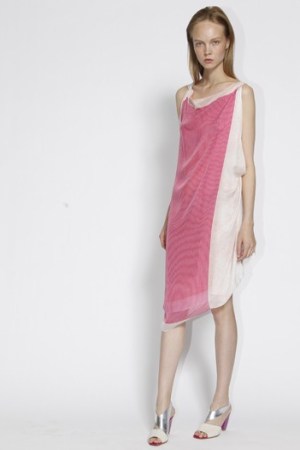 Prints, color and California are not words typically associated with Jil Sander, a collection anchored in strict devotion to minimalism and precision cuts. Yet those concepts unite in Jil Sander Navy, Raf Simons’ new casual collection that the Milan-based company is launching for spring 2011. “We are targeting all kinds of categories that aren’t completely represented in the main collection,” said Alessandro Cremonesi, chief executive officer of Jil Sander. “There will be some surprises in terms of prints and colors. But they are done the Jil Sander way.”

So bold magenta, orange and kelly green are interspersed among the house’s signature neutrals — khaki, black, white and, of course, navy — along with a few graphic stripes and a beachy print based on the work of 17th-century artist Abraham Mignon. Clean, simple shapes alternate between the structured, like crisp white shirtdresses, and the easy, as in bias cut jersey T-shirts shown with the traditional house oxfords, now in canvas, and gladiator sandals. All of it is done in Japanese or European fabrics with an emphasis on light weights in cotton voile, micro twill and nylon with techno gabardine.

Press and retailers can see the goods for themselves today at a preview for the collection held in Jil Sander’s New York showroom, a site specifically chosen to communicate the company’s focus on the U.S. market before it moves to Japan, another high priority, and then Milan. “The U.S. market has been really receptive,” said Cremonesi. “And it’s been requesting such a project from the collection.”

Navy, which retails from $125 for a T-shirt to $1,000 for a dress or trenchcoat, is priced well below the main collection. Just don’t call it Jil Sander’s lower-priced line. It’s all about the big picture according to Cremonesi.

“We’re more interested in if the price of the casual line will result in a repetitive buy,” he said. “It’s not just price positioning we’re looking for but also the lifestyle we wanted to interpret.”