FRANKFURT — Her work speaks for itself. That is the message Jil Sander conveyed in no uncertain terms Thursday, first by skipping the preopening press conference for her first solo retrospective at Frankfurt’s Museum for Applied Art. To be sure, the exhibit dramatically celebrates the power of less on three floors and 32,000 square feet of sparsely filled, precisely staged space.

“Jil Sander: Present Tense” opens Friday and runs through May. It’s been a project museum director Matthias Wagner K. said was on the top of his wish list when he joined the museum five years ago, but Sander was not easy to convince. For one thing, she’s not fond of looking back. For another, she’s no fan of the customary still-life parade. “I’m not really a friend of clothes on mannequins, especially clothes that someone has worn before. It’s not really my dream,” she told WWD prior to the opening. What changed her mind? 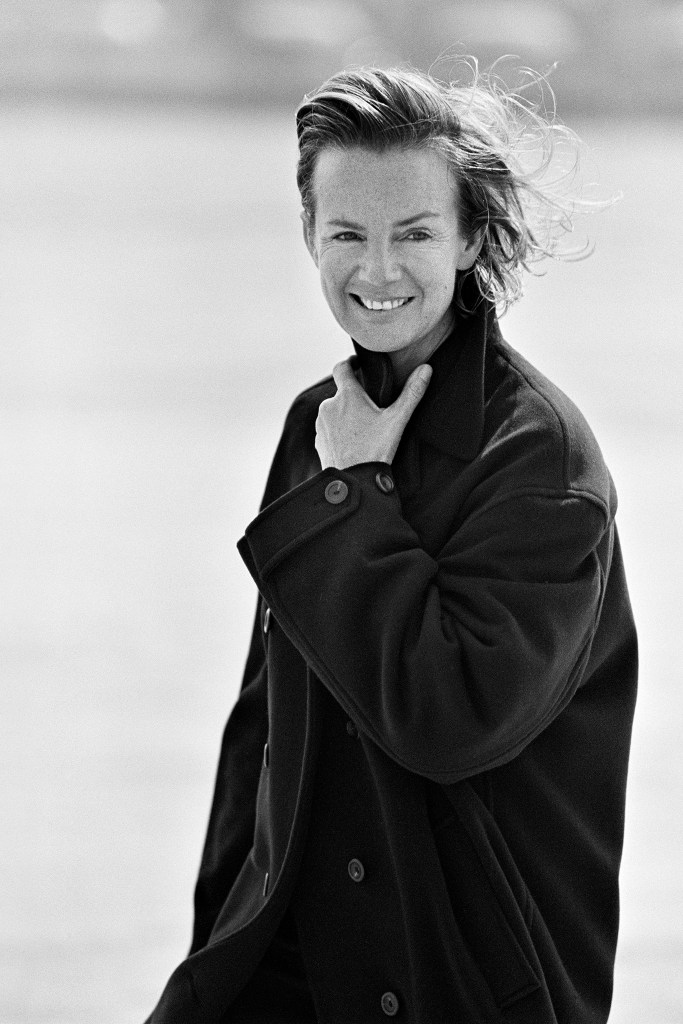 Richard Meier’s white L-shaped, three-cube complex, with its ramps, open vistas, space flooded with light, and a mutable floor plan where walls could appear or disappear. After visiting the building, Sander decided to take the plunge, and for the past year and a half, she, her team and Wagner K., who is also the show’s curator, began work on the project.

The exhibit spans all aspects of Sander’s design vision: from fashion and accessories, beauty and fragrance for women and men; store and showroom design with her architect of choice, Michael Gabellini; the brand’s campaigns and look books lensed by a who’s who of photographers including Peter Lindbergh, Craig McDean, David Sims, Mario Sorrenti or Jean-François Lepage; her collaboration with artist Mario Merz, and her expansive and breathtaking garden.

It also takes an interactive and contemplative approach to the “stuff” of fashion and its creation. There are oversized and diminutive digital screens embedded in the walls or perched on display tables; larger-than-life photo blow-ups, and video screens, where the 30-minute essence of 60 hours of runway film pulls you in, out, up close, in a non-specified run of show. Sander and her team came up with a striking and androgynous take on a mannequin/dress form for what Sander dubs her “reality show” of selected garments, mostly black, but not always.

Music and sounds have been individually designed for every space by her runway music go-to guy Frédéric Sanchez. Objects on display include a signature Jil Sander clothing rack poised like a sculpture, blown-up pattern pieces, architectural drawings, plans, models, swatches — even dried-up plant forms invite us to look and think differently about Sander’s creations and her decades-long investigation into the perfection of form. And then there’s the film of her garden, filling a floor-to-ceiling screen and offering close-up beauty, natural blurs and a drone’s eye view of Sander’s natural order.

What’s missing are the facts, names, dates that will have some trying to guess: What year was that shoe from? What season that dress? What city that store? Not that it matters, for nothing in this exhibit feels dated. And regardless of what one is looking at — a men’s jacket half tailored to show the construction, a store interior, ad campaign, garden plan or the Merz/Sander kaleidoscope project — there is a binding aesthetic and one that holds true.

Also surprisingly missing in a country prone to text-heavy exhibits is a barrage of words, letting one better savor the well-chosen and isolated quotes appearing on the walls. Such as, “Laying out a garden is the quest for a better world.” “What interests me is the new — the emerging.” “Innovation in materials contains an aesthetic potential that will decisively determine the fashion of the future.” “If, in my long experience of design, a personal signature may have emerged, then it is in the pattern-making. These are my own formulas, which I repeatedly perfect and above all redesign. What in the end looks simple and obvious is the result of long experimentation.”

Neither Sander nor the museum could say where the exhibit will go from here. There has already been interest from abroad and it is unlikely it will have its first and final stop in Frankfurt. In the meantime, the accompanying catalogue, published by Prestel in German and which is the first large-scale book to appear on the designer, lets those far from Frankfurt get to know Sander in all tenses: past, present and future.