Jill Stuart has 1,000 bags in her repertoire, but, apparently, that's not enough. 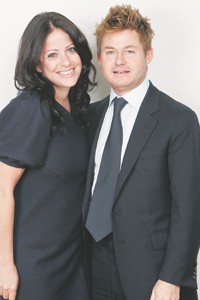 NEW YORK — Jill Stuart has 1,000 bags in her repertoire, but, apparently, that’s not enough.

The contemporary designer, who started out doing accessories, is going back to her roots with a handbag line under license with Schifter & Partners.

“I’ve been researching and collecting bags since I was 14,” said Stuart, who has a large accessories business in Japan at 20 freestanding handbag boutiques.

A source close to the firm said Stuart’s total business in Japan, which includes ready-to-wear, fragrance and color cosmetics, has revenues of $100 million.

Although her U.S. business is markedly smaller — sales amount to $30 million, according to the same source — the handbag line is expected to generate $10 million to $12 million at retail in its first year in the U.S., according to industry estimates.

Stuart has always incorporated accessories into her rtw line, but the Schifter union will result in the designer’s first comprehensive handbag and small leather goods collection to be distributed internationally.

“I’ve been a great admirer of Jill’s work for many years,” said Tim Schifter, who formed Schifter & Partners last April with a minority investment from Gwen Stefani, the musician, actress and designer. Schifter collaborated with Stefani on three handbag collections under Stefani’s L.A.M.B. label during his tenure at LeSportsac.

The Jill Stuart handbag line is Schifter & Partners’ third brand launch since the firm opened. The company rolled out its first handbag brand, Harajuku Lovers, with Stefani last September and the higher-priced L.A.M.B. line, which retails for up to $700, in November. Prices for the Stuart line range from $225 to $550 at retail.

Schifter plans to announce a fourth designer collaboration later in the year.

“Jill has a very loyal following, and although it’s new each season, there’s a consistency that differentiates her brand from other designers in the market,” said Schifter. “We really thought that the sensibility of her collection and her distinct feminine, vintage-inspired vibe would translate marvelously well into accessories.”

Stuart is betting that the handbags, which all bear the sans serif Jill Stuart logo at top center, will bring the brand increased recognition, especially with a main floor presence.

“With a dress, you don’t see the Jill Stuart name,” Stuart said. “The branding and the logo on the bags are very important.”

Stuart has some other main floor offerings, but the handbag collection is sure to boost her presence. The designer’s other categories include a fragrance and color cosmetics line with Kose Corp. that is in limited distribution, eyewear under license with Eyewear Design and footwear and costume jewelry. She also has a six-month-old men’s wear line and is preparing to launch Jill, a lower-priced women’s clothing collection, this year.

The contemporary handbag market has seen some growth in recent years with the advent of niche companies like Kooba, Isabella Fiore and Botkier commanding main floor shelf space in specialty and department stores such as Saks Fifth Avenue, Neiman Marcus and Macy’s. Design firms Cynthia Rowley, Theory, Elie Tahari and Marc by Marc Jacobs have budding bag businesses, and then there are the behemoth Coach and such large firms as Dooney & Bourke. But there is room for more brands in the market, according to Rosemary Fraser, buyer of bridge and designer handbags for Macy’s West.

“[Stuart’s line] fills a unique niche, as the style offerings are fresh, because it’s a mix of vintage and modern,” she said. “It’s a good niche to go into because there isn’t a lot of competition.”

“Jill Stuart handbags are for the fashion-forward consumer,” said Fraser Ross, owner of Kitson in Los Angeles. “It will be great because it will complement the shoes and clothing line that we already carry.”

The inaugural collection for pre-fall is divided into two groups, the Leather Collection and the Vintage Collection. The Leather Collection comprises 10 silhouettes ranging from slouchy soft cowhide leather hobos with custom hardware in antiqued nickel to fold-over clutches done in hues Stuart herself named: mascara, sweet cream, espresso and slate.

The Vintage Collection shows Stuart’s love of objects of yesteryear in Forties-inspired leather satchels updated with ruching in waxed lambskin and a Sixties-look patent leather clutch with polished circular buckles. Bags from this collection come in bright colors and have a gold Stuart logo centrally placed. There are also cosmetic bags and small leather goods.

The new Stuart bags will be launched in 100 U.S. doors, including Bloomingdale’s, Nordstrom, Saks Fifth Avenue, Cusp and Kitson, and 30 doors in Japan — including Stuart’s own — starting in June.

“We tried to develop an extremely high-quality product at a fantastic value,” said Stuart. “I think women are getting tired of the really expensive bags. As the consumer becomes savvier about what they’re getting, there’s been a tremendous growth in the contemporary market. The value you get with these handbags is incredible.”

Stuart is planning to promote the line on the runway in her February show and bags will be included in the designer’s new ad campaign shot by Mario Sorrenti.