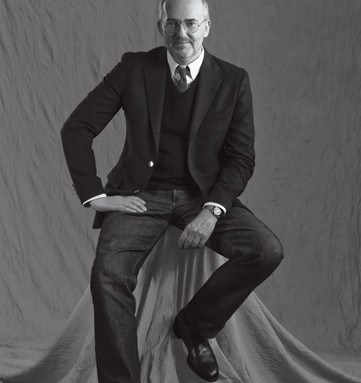 In his 29 years at GQ, Jim Moore has collaborated with a who’s who of heavyweight photographers — Avedon, Demarchelier, Meisel, Ritts, Testino, Weber — to shoot a gold-plated roster of GQ cover guys including Tom Cruise, Brad Pitt, Johnny Depp, Jake Gyllenhaal and Tom Brady.

Apart from a very brief stint as a sales manager at Macy’s Herald Square, GQ has been Moore’s life’s work. He was first hired at the title in 1980 as a fashion assistant, after graduating from the floridly named Tobe-Coburn School for Fashion Careers Ltd.

“I was always interested in clothes — it was a part of who I was,” recalls Moore, who grew up in St. Paul. After first studying painting in Minneapolis, he decided he wanted something “a little more glamorous,” and moved to New York.

During his influential tenure at GQ, Moore has certainly brought glamour to its pages, working under three editors in chief: Jack Haber, Art Cooper and, now, Jim Nelson. But more than just making the magazine look beautiful, Moore has focused on educating men about style.

“We love our pages to be lush and sexy and fun, but I think the common thread has been about teaching guys how to look good on their own,” he says. “I think it’s what we owe men.”