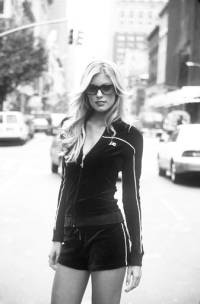 NEW YORK — JLo by Jennifer Lopez has had some growing pains in its first year, but executives feel the brand is on track for growth in 2003.

The collection has been updated and segmented for spring, a more subdued logo will be in place, a fresh ad campaign is being shot and expanded distribution is in the works.

“Like any new brand, we are evolving, and this collection will show how we are reinventing and becoming more feminine and trendy and contemporary looking,” said Heather Thomson, vice president and creative director of the JLo by Jennifer Lopez line, a joint venture between Lopez and Sweetface Fashions.

The JLo by Jennifer Lopez label has quickly developed into a lifestyle brand. At the time of the launch, the company set a first-year wholesale revenue target of $100 million, but lowered that to $65 million after the first line shipped into stores.

Since then, according to Denise Seegal, president and chief executive officer of Sweetface Fashion Co., the brand has reached that mark and has set its newest target at $130 million at retail by the end of holiday 2002. This number reflects the JLo by Jennifer Lopez label as a whole, which now includes junior and girls’ sportswear, plus-size junior sportswear, eyewear, swimwear and fragrance.

Sweetface first launched the JLo line for holiday 2001 in Macy’s Herald Square, Macy’s West, Nordstrom, Dillard’s, Marshall Field’s and May Co. Since its rollout into about 1,000 specialty and department stores, the reaction from retailers has been mixed.

Macy’s East has carried the line in its Herald Square location since the beginning. According to Robert Jezowski, executive vice president of ready-to-wear, the store plans to expand its assortment in the spring.

“We are doing very well with the line,” he stressed. “It is the best junior performer in the store to date. They have good management, are more focused than before and they have good product.”

Jezowski said the company is planning to extend the JLo line into other Macy’s East locations in addition to the flagship in Manhattan.

“The line is not good, but it’s not bad either,” said S.K. Byun, manager of buying administration at Against All Odds, an 18-store specialty chain based in Moonachie, N.J. “I saw the spring line and it’s getting better, but it really needs some more special pieces. The athletic trend is so big right now and they aren’t offering enough. Also, it’s a little too plain, not enough fashion.”

Byun said he is planning to continue offering the line, but only in a limited number of stores.

For spring, the line has been divided into three categories: denim, urban and trend. This way, according to Andy Hilfiger, co-founder and director of Sweetface Fashions, the brand can compete with all of these markets within the junior clothing sector.

The denim category consists of denim jeans, shorts and skirts, but also includes the denim jumpsuit, a style that’s been a top seller since the inception, Thomson said. For spring, the company is introducing light-washed jeans and cargo-inspired jeans in a darker wash matched with a denim halter top.

The urban category includes other signature pieces, such as velour sweatpants, shorts and jackets, as well as sweats and T-shirts in fabrics like cotton jersey and mesh.

On the more trendy side are halter tops and T-shirts in bright colors like fuchsia and electric blue paired with white or khaki cotton pants, as well as colorfully graphic printed tops to go with jeans.

As for the new logo, Thomson said the period has been dropped (it used to read J.Lo) and it will be much smaller on the clothes. For example, where it used to be large and embroidered in a different color than the garment, it will now appear smaller and the same color as the piece. Also, the logo will not appear on every piece, but will remain on the velour and jersey sets.

“These clothes have to stand on their own,” Thomson said. “If it had no logo on it at all, it would still sell. That’s how Jennifer looks at the line and that’s how we look at it. This is a line that is new and different and whether they are a fan or not, they will still see the clothes as hot.”

The new ad campaign will showcase the spring line. The ads will show models in the clothes, rather than Lopez modeling them, as it was last season. Hilfiger said he is planning to advertise the junior sportswear line in YM and Elle Girl magazines and the girls’ line in Vibe. Hilfiger said he is also planning on some outdoor advertising.

Hilfiger and Thomson said Lopez is still involved in every aspect of the line’s development. But how does she have time to meet with the Sweetface crew to design clothes when she is filming movies and videos and recording albums, all while dating Ben Affleck?

“It’s all about multitasking,” Hilfiger said. “We meet her wherever we can. In fact, we just met her in her trailer while she was taking a break from taping a movie.”